Swami Thielini looks into the mystical mists to tell of PBS shows to come.
by David Thiel 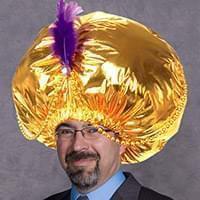 Okay, so I didn’t need to go to swami school to know that the sixth and (sadly) final season of Downton Abbey will premiere Sunday, January 3 at 8:00 pm. And join us for one last dinner with the Dowager Countess on March 6.

It is ordained that Sunday, March 27 will bring a 4th season of Mr. Selfridge. And in the distant haze—Sunday, April 3, to be precise—there awaits a 2nd season of Grantchester and a 5th season of Call the Midwife!

Your swami can confirm that WILL-TV will continue its commitment to independent documentaries. I look forward to “Chuck Norris vs. Communism” (Monday, January 4), an Independent Lens presentation which will recount how VHS tapes of ‘80s American action films changed Russian perspectives of the West.

Tuesday, February 23 will bring the television premiere of the theatrical film The Black Panthers: Vanguard of the Revolution. We’ll look back 50 years to the turbulent times that birthed this civil rights organization.

My crystal ball has at last finished installing updates…and within I lift the veil on the return of Finding Your Roots on Tuesdays beginning January 5. This year, Henry Louis Gates, Jr. will talk family history with Norman Lear, Maya Rudolph, Bill O’Reilly, LL Cool J, Jimmy Kimmel, Mia Farrow, and more. Further into the future, it will be our destiny to cross the country for a 3rd season of Genealogy Roadshow.

The images of Television Yet to Come now swarm around me…American Experience will meet Bonnie & Clyde, and bear witness to the assassination of President Garfield…Janis Joplin, Carole King, and Loretta Lynn will be American Masters…Ken Burns will devote two evenings to trailblazing ballplayer Jackie Robinson.

And I see…you! Well, 9 Months That Made You, a PBS-BBC coproduction that explores how human development in the womb affects our entire lives. It’s predetermined for late May.

With that, the crystal ball darkens, and Swami Thielini must depart, to return when you least expect him…