On the 21st: A street artist leaves art for the public -- in the form of filling potholes. Plus, How Chicago plans to clear up rail congestion this fall with federal aid. And, we discussed Artificial Intelligence and its future with Microsoft's Eric Horvitz.

If you’re on the road, you’ve probably hit a pothole at one point or another. It’s especially bad here in the Midwest. And one artist has been taking matters into his own hands for years, by not just filling potholes himself, but by adding his own mosaic street art for all to see. He's been doing it for years, with images ranging from ice cream sandwiches to bags of Cheetos.

Jim Bachor is a graphic and mosaic artist in Chicago. He joined us from our studios in Evanston.

"I got into mosaics initially because they're so incredibly durable," says @bachor. "I had the idea of merging this passion that I love so much that is so durable, and fixing that pothole myself." 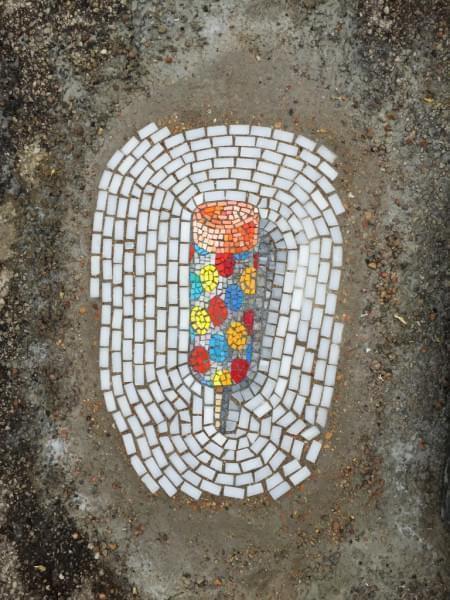 If you’ve ever felt stuck on a train on the way to or from Chicago, you’re not alone. Nearly 1300 freight and passenger trains pass through the city every day, making Chicago biggest hub for train traffic in the country.

For years now, planners and local officials have known that one of the keys to solving this problem is the 75th Street Corridor on the Southwest Side. And earlier this month, it was announced that help could finally be on the way from Washington. Five members of our Illinois Congressional delegation, including Senators Durbin and Duckworth, announced 132 million dollars in federal funding for the Chicago Metropolitan Agency for Planning.

.@davidschaperNPR says the importance of Chicago's "spaghetti network" of rail lines is not to be underestimated. "It's really a lynchpin to the entire transportation network in the entire country."

For your simple needs, Siri - or Alexa - or any of your Google home devices - can be a great assistant. And if you ask her to add something to your calendar, or to play a song, she can usually handle it. But, imagine trying to have a full on conversation with her.

Researchers at Microsoft are working on ways to do just that, and much more. Artificial intelligence, or AI as it’s called, is actually already used in our lives - for example, in our GPS systems, or when your new iPhone unlocks by looking at your face. But, AI has the potential to affect our lives in broader ways as well.

.@erichorvitz is working on #AI100, a one hundred year long study on #ArtificialIntelligence. What do you think #AI will look like 5, 10 or even 100 years from now? Read more here: https://t.co/NDvAawmOAv