After months of speculation about the political future of Congressman Rodney Davis, the fifth-term Republican finally made clear his intentions late last month: He's running for reelection. It’s understandable why he’d been waiting—Davis’ fate was not entirely in his own hands. Although he serves in the U.S. Congress, it’s the Democrats who control state government in Springfield who drew him into a new district that runs across central Illinois like a sash. It’s the 15th Congressional District, and it borders Iowa and Missouri to the west and stretches to Indiana in the east. He joined The 21st to talk about his decision to run for reelection, the infrastructure bills, and more. 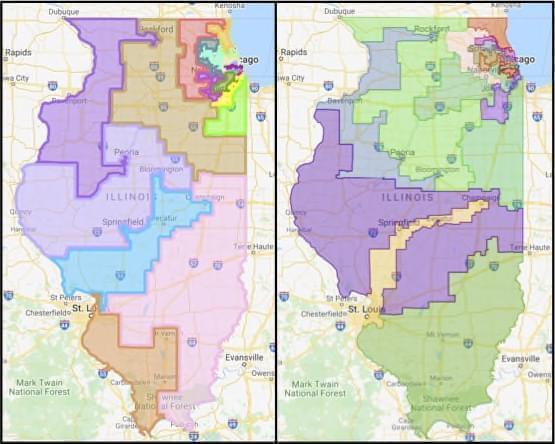 In the above graphic, Rep. Davis' 13th District is highlighted in light blue in the current Congressional district map on the left. On the right is the new Congressional district map, with the district Davis has announced he'll run in, the 15th, noted in purple.* It includes the towns of Quincy, Jacksonville, Mattoon, and Davis’ hometown of Taylorville. It goes near — but largely sidesteps — bigger cities like Champaign-Urbana, Decatur, Springfield, and Edwardsville.

“Hoping to remain in Congress,” @ElectRodney told reporters in August. “But it’s not my choice. It’s the choice of the corrupt Democrats in Springfield.”
That was well before Dems passed a new congressional map last month, leaving him a safe GOP district. https://t.co/FWrybjrbLo

* Correction, Dec. 9, 2021: An earlier version of this post misidentified the district in which U.S. Rep. Rodney Davis announced he would seek re-election to Congress.