Another Vietnam: Pictures of the War from the Other Side 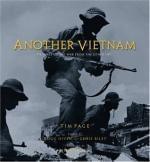 Often described as the first 'television war', the Vietnam conflict was defined - and shaped - by cameras and the bold, gifted photographers behind them. Our memories of Vietnam are literally graphic - a Buddhist monk setting himself on fire, a war-weary grunt with a thousand-yard stare, a napalmed child fleeing her flaming village, desperate refugees clinging to the skids of the last helicopter out of Saigon. These and a hundred other images are seared into our consciousness - but a very different viewpoint appears in this vision of three decades of war in Vietnam.

'Another Vietnam' presents the view of the North Vietnamese combat photographers who documented their people's 30-year struggle, first against the French and then against the Americans. Intended above all to inspire, their pictures portray a society committed to victory at all costs, but they are much more than mere propaganda - They show us courage, drama, resolve, and - often - a violent beauty. National Geographic Picture Editor Doug Niven sought out surviving photographers and discovered a treasure trove of images created under the harshest of conditions and preserved for a quarter century against all odds.

Doug Niven discusses this compilation of never-before-published images by North Vietnamese photographers, which captures the events of the Vietnam War from a new perspective and documents daily life and battle on the North Vietnamese side.