There's not time like May to see the most colorful birds that come through (and to) Illinois.
Rob Kanter
Listen (Duration: 3:59)
Download

Have you noticed friends or coworkers looking a little sleep-deprived lately? Perhaps these same people complain of a sore neck, and look past you into the trees while you’re talking. You may be encountering birders caught up in the excitement of spring migration.

Sure, a variety of birds have been migrating through central Illinois since February. During the late winter and early spring something like 240 species of birds belonging to 39 families pass this way. But for most birders, the highlight of spring is songbird migration, and that becomes most intense over the next few of weeks.

There are great numbers of birds and a great variety of species represented in this wave, hundreds of thousands of individuals belonging to more than 120 species. The most dazzling among them are members of a family of birds known as warblers, which are incredibly colorful little birds that average only about a third of an ounce in weight. Although they are small, warblers migrate long distances, from wintering ranges in Mexico, and Central and South America to breeding areas in the U.S. and Canada.

As they move north, warblers feed on insects, especially the caterpillars, bees and wasps that populate the crowns of trees as they flower and leaf out. (This habit of the birds accounts for a condition that afflicts birders known as “warbler neck.” That’s the pain you experience when you spend too much time looking up.)

Although 20 species of warblers breed in Illinois, only about half of those nest in the central part of the state. Most individuals of the 37 warbler species that occur here during spring are just passing through on their way further north.

Ironically, the highly-fragmented nature of the central Illinois landscape creates great opportunities for warbler watching. Migrating birds that need trees to feed in when they stop are concentrated in urban areas and the isolated woodlands that remain here. 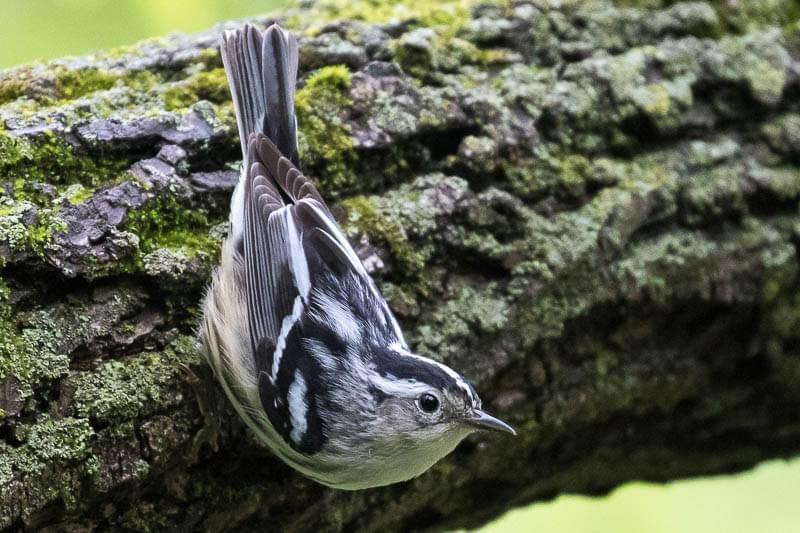 It seems almost foolish to try to describe in words the vivid beauty that prompts birders to get out before sunrise day after day. Some warblers are all about color. The blackburnian warbler’s throat and head, for instance, exhibit such a bright combination of orange and yellow that it looks to be on fire. And the cerulean warbler—well, if you’ve only experienced “cerulean” as the color of a crayon, you’ve got to see this bird. Other warblers are about patterns. The aptly named black and white warbler, for example, makes up for its lack of color in the same way a zebra does, by sporting crisply defined black and white stripes all over.

If you’re new to birding, or just interested in getting out with people who share your enthusiasm, you might want to check out the Sunday morning bird walks hosted by the Champaign County Audubon Society at Busey Woods and Crystal Lake Park in Urbana.

You may also want to add to your calendar some events associated with International Migratory Bird Day, which is this Saturday. The Urbana Park District has activities with ornithologists from the Illinois Natural History Survey scheduled from 7:00 until 10:00 in the morning. Then starting at 10 the Champaign County Forest Preserve District will keep things going through afternoon at Homer Lake, ending with a presentation including a live snowy owl from 3 until 4 in the afternoon