It’s really unbelievable how much the weather has changed since our last full day shooting at Prairie Fruits Farm. Sweaters and scarves are being busted out much more frequently at WILL-TV HQ, and all of us notice the approaching (or existing) dusk as we prepare to leave for the day. Summer’s definitely over.

When we first began this (as-yet unnamed) project, summer was just starting to maybe, possibly think about peaking – things were GREEN! They were BLOOMING! They were BURSTING! – and it was hot. There were a couple of shooting days where I thought all of us – crew and interviewees – would melt like so much goat’s milk gelato. Today? Tim finished almost all the shooting at the farm. He captured a previously-elusive sunrise and gathered remaining exteriors, but he was bundled up, and the hat he was wearing wasn’t a baseball cap. (Dodgers or Cardinals, Tim? Tigers or Red Sox?) 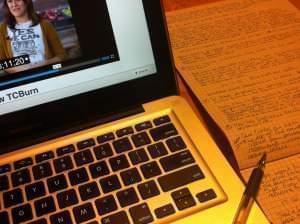 Activity is now moving mostly inside, as Tim mentioned in the last entry. I’ve been reviewing footage and re-living summer 2013 as I make my notes and draft the narration, but I’ve also had a chance to start going through the many photos I’ve taken at Prairie Fruits Farm over the last 5 or 6 years, some of which we’ll use for coverage in the program. Lots has changed at the farm, definitely, but much remains the same.

Food is still planted, grown, harvested, and cooked. Goats are born every spring. Cheese is still made, packed, and shipped – and now its cousin, gelato, joins it in the coolers. People still visit the farm to eat and learn a few things and pet a few goats (and Wes still hops up onto the John Deere tractor to speak to guests). Chef Alisa remains PFF’s chef – just with an expanded cast of characters. Watching things unfold at the farm through pictures has been instructive for me – we hope the show will do the same for you.

Back to the notebook and computer monitor. We’ll check in again soon!