From June to October, WILL-TV followed the arc of a farm-to-table meal that began—and ended—at Prairie Fruits Farm north of Champaign-Urbana. The documentary Course Work: Dinner Season at Prairie Fruits Farm, airing at 7 pm Monday, Dec. 9, on WILL-TV, shows viewers how the activities on the farm build to the night of the dinner.

Tim Meyers, WILL-TV director of photography for the project, and producer Lisa Bralts wanted to show how the fruit orchard, at one time lush with blackberries, peaches, pears and apples, dwindled with each weekly U-pick. The vegetable gardens were transformed as the deep greens and bright reds of basil and tomatoes gave way to the hardier fall crops. And the mud-loving hogs, growing noticeably fatter every week, began to disappear one 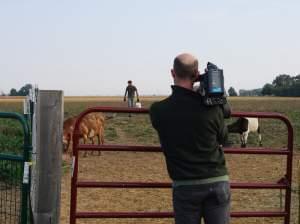 by one as they headed off to become part of the season’s dinners on the farm.

“One of the goals of this project was to show viewers what life is really like on small, diversified family farms as the seasons move forward,” Bralts said. “We’re so lucky to have a farm just outside Urbana-Champaign where farmers are willing to share their experiences ―not just with us, but with the patrons who visit them for dinners, breakfasts, and U-Pick. They’re an amazing community resource.”