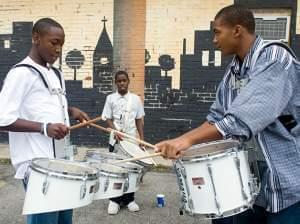 The Beat Goes on

This mini-documentary begins to tell the story of the Douglass Center Drum Corps and Drill Team in Champaign-Urbana, Illinois, during its heyday in the late 1960s and asks the question, “Who will carry on the tradition and provide this important social outlet for young black men and women today?”

In the 1970’s, when William Patterson was a boy, he spent many hours at Douglass Park and the Douglass Community Center in Champaign, Illinois, playing ball, watching movies, attending festivals and absorbing the beats and rhythms of the once award-winning Douglass Center Drums Corps. The park was the social hub of the African-American community and William felt safe, cared for and loved in the space. The Douglass Center Drum Corps was a vital component of William’s childhood, particularly, when he became a “stick boy” along with Hymie Hogue.

Thirty years later, Dr. William Patterson (a.k.a. Dr. P), founder and co-director of the Youth Media Workshop, would connect a new generation of youth to the park by guiding them through the process of making a mini-documentary on the Douglass Center Drums Corps during its heyday in the mid-1960s when it won a national drum corps competition in New York city.

With the help of Urbana High School guidance counselor, Grace Mitchell, Dr. P recruited a group of male high school students in 2006 to research the Drum Corps. He and YMW co-director, Kimberlie Kranich, along with WILL-TV producer, Alison Davis, and WILL-TV director, Henry Radcliffe III, worked with the students for nine months until the students had completed their 25-minute mini-documentary, And the Beat Goes On: The Spirit in the Legacy of the Douglass Center Drum Corps.

The experience made quite an impact on the young filmmakers. To learn more in the filmmakers own words, watch The Making of And The Beat Goes On.

The filmmakers started their quest with historical documents. When was the Douglass Park Community Center founded? For what purpose? Who was on the drums corps and drill team? Are any of them still alive? Who can we interview?

Anke Voss, director of the Champaign County Historical Archives at the Urbana Free Library, pulled out old documents about the Park and the Drum Corps and showed the students how to access newspapers on microfilm from that time period.

Ellen Swain, assistant professor of library administration at Illinois, hosted the students at the U of I Archives, showing them how to dig for connections between the U of I and local African-American life and culture.

The students’ biggest find came at the Early American Museum in Mahomet where museum director, Cheryl Kennedy, showed the students early photos of the drum corps from the Doris Hoskins Archives on Cultural Diversity.

Once the film was edited, it screened in many venues. It premiered on September 23, 2006 at the locally-owned Art Theatre in downtown Champaign, as well as at Urbana High School, the Urbana Free Library, the Urbana-Champaign Independent Media Center, in local classrooms and elsewhere.

The film’s reputation kept building and in 2009, Jay Walker, one of the Youth Media Workshop filmmakers, sat on a panel with six other young filmmakers as part of the seventh annual AFI-Discovery Channel SILVERDOCS Documentary Festival, in Silver Spring, Maryland, on June 19, 2009. He showed an edited version of And the Beat Goes On: The Spirit in the Legacy of the Douglass Center Drum Corps.

This was only the second time in seven years that the festival featured student-produced work. And this was Jay’s first trip to DC and the first time YMW co-director, Kimberlie Kranich, was the sole chaperone for an out-of-town YMW trip.

The students were interviewed on local radio talk programs hosted by Tom Rogers on WILL, Carol and Aaron Ammons on WEFT, Imani Bazzell on WBCP and Gary O’Brien on WDWS promoting their film and sharing their experiences and the history they uncovered.

The Beat Goes on Blog

Photos of Black I getting TV Production Training on February 8, 2006

Jay Walker, a graduate of the Youth Media Workshop, sat on a panel with six other young filmmakers as part of the seventh annual AFI-Discovery Channel SILVERDOCS Documentary Festival, in Silver Spring, MD June 19, 2009. He showed an edited version of “And the Beat Goes On: The Spirit in the Legacy of the Douglass Center Drum Corps,” that he created in 2006 with other YMW students.

More on The Beat Goes on