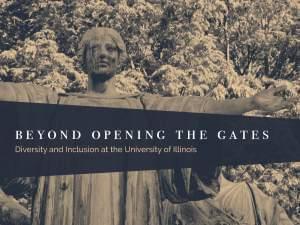 Beyond Opening the Gates: Diversity and Inclusion at the University of Illinois

This oral history project, produced by students of University High School in Urbana, Illinois, focuses on how affirmative action became part of decision-making in higher education admissions, both at the University of Illinois and more generally in the U.S.

Beyond Opening the Gates: The Documentary

Affirmative action in college or university admissions is the practice of actively finding and identifying, recruiting and retaining individuals from underrepresented groups. This project seeks to reveal the history of affirmative action in higher education, and where and how considerations of race enter into decision-making about access to educational opportunities in our community still today.

This oral history explores how people in central Illinois have advocated for and practiced affirmative action, how it has been implemented in local educational institutions, and the effects it has had on our community. Through the lens of our interviewees’ experiences, we learned more about the struggles that people have faced so that more individuals will have fair opportunities to pursue a higher education and thereby enrich their lives.

Listen to this March 6 discussion with producer Kathryn Dullerud and interviewee Rochelle Gutierrez on Illinois Public Media's The 21st.

Related article from the Lensfest Institute: How a Public Radio Station Collaborates with High Schoolers to Produce Audio Documentaries

After the Supreme Court in Brown v. Board of Education (1954) ruled segregation in schooling unconstitutional, President Lyndon B. Johnson called for “affirmative action” in both educational and employment opportunities, culminating in Executive Order 11246 in 1965. The executive order instructed government contractors to make greater efforts to hire minority employees. In 1969, President Richard Nixon signed the Philadelphia Order, requiring construction firms in Philadelphia to show proof of affirmative action steps. In the next few years, universities and colleges began adopting similar guidelines in their admission processes, as a means of correcting the extremely low enrollment of minority students beyond the network of historically black colleges and universities (HBCUs). Many universities began adopting quotas for the number of minority students accepted into each incoming class.

​By the late 1960s, inspired by the civil rights movement, plentiful court cases, and extensive media coverage, African American students at the University of Illinois in Urbana-Champaign started to make a larger push for change. They felt that the student body at UIUC was not representative of the state’s diversity and thus they challenged the university to recruit 1,000 African American students to create a more balanced school environment. The administration felt this goal was too ambitious, so they compromised, leading to creation of a special effort to recruit qualified students of color, known as “Project 500.”

Affirmative action policies at universities around the country generated controversy, as evidenced in the 1978 case, Regents of the University of California v. Bakke. Allan Bakke, a white man, claimed that his rejection from the University of California-Davis was due to his race, since minority applicants who were “less qualified” than he was had been granted admission. The U.S. Supreme Court ruled that schools were allowed to take race into account when making admissions decisions, but that they could not use specific quotas, or set numbers. Universities continued to implement affirmative action policies. In 1997, however, California’s Proposition 209 banned any form of affirmative action in admissions or hiring processes at any organization within the state. Only four years later, in 2001, a federal judge ruled, in Grutter v. Bollinger, that the affirmative action policies of the University of Michigan’s law school were unconstitutional. This decision was overturned in 2002 by a federal appeals court and then taken to the Supreme Court.  The final ruling determined that the law school’s use of race in admissions was constitutional, but suggested that at some point, such policies would no longer be needed.

The case Fisher v. The University of Texas has gained media attention due to its persistence in federal courts, from 2008 until 2016. Abigail Fisher, a white woman, claimed that she had been rejected from the University of Texas-Austin because of her race and that the college’s admissions process with regard to race was not clear.  However, Justice Anthony Kennedy said the university’s admissions policies about race were “concrete and precise” and that they served the goal of promoting diversity on campus. Affirmative action policies continue to be controversial, due to some people’s beliefs that they lead to reverse discrimination and hurt many qualified people.  Nonetheless, federal courts have ruled that race-related factors are allowed in decision-making about public goods (such as admission to a public university), as long as they promote a compelling interest of the state.

Read about the Interviewees

More on Beyond Opening the Gates: Diversity and Inclusion at the University of Illinois

Explore and listen to Beyond Opening the Gates: Diversity and Inclusion at the University of Illinois audio