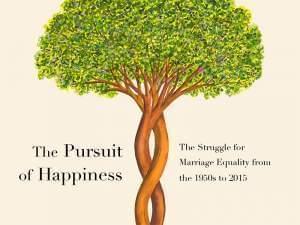 The Right to Marry

The Right to Marry Project's goal is to explore the right to marry in contemporary American society.  This project examines changes in laws, ideas, attitudes and practices regarding interracial, intercultural and same-sex marriage from the perspectives of individuals, couples, and families in east central Illinois from the 20th century to the present.  We also seek to understand the experiences of people in non-traditional marriages, and how such experiences have evolved as laws and perspectives, in our local community and in the broader nation, have changed over time.

Every year, University Laboratory High School (Uni High) students, in collaboration with radio journalists at WILL/Illinois Public Media, initiate an oral history project.  This is a two-year-long process of inquiry into a topic of broader social relevance, as seen through the lens of our local community.

The Right to Marry Blog

The Pursuit of Happiness: The Struggle for Marriage Equality from the 1950s to 2015
Listen

This documentary explores the experiences of these traditionally marginalized couples from the 1950s to the present, and offers insight into evolving perceptions of race and sexuality throughout this time. Students at University Laboratory High School, in collaboration with Illinois Public Media WILL-AM 580, interviewed 16 individuals and couples whose stories capture both struggle and triumph as the battle for marriage equality has played out.

By the end of this month, the U.S. Supreme Court is expected to rule on the constitutionality of state bans on same-sex marriage. Students from University Laboratory High School have prepared a series of reports on the history of the right to marry in contemporary American society. Today in the final installment of Breaking Barriers we meet Kathleen Robbins, a transgender woman.  Series producer Vinay Koshy narrates the story written by Uni High student Keisha Patel.

Later this month, the U.S. Supreme Court is expected to rule on several issues related to same-sex marriage. Students from University Laboratory High School have prepared a series of stories on the experiences of people who have fought for the right to marry. In part three of Breaking Barriers we hear about the stories of non-traditional couples who have chosen to have children and how their marriage has affected their children’s upbringing. Series producer Alice Hu narrates the story written by Uni High students Rima Rebei and Zina Dolan.

More on The Right to Marry