I started my first WILL Oral History project back in 2010. Just looking at that date is almost surreal to me. Has it really been almost five years? Where has all of this time gone?

I still remember my very first year as the Team Captain of a group of four boys. Our mission: to interview a Mr. Richard Adkins, a veteran of the Vietnam War. Slowly, but surely, we emersed ourselves into the beautiful and colorful world of Counterculture here in Urbana-Champaign. A now, about four years later, a group of five seniors embark on the second half of a journey to explore the right to marry (or R2M, as we fondly call our project). We started off with nine different project ideas. That's right, nine. As you can see, a lot of work went into choosing the right topic for us five. 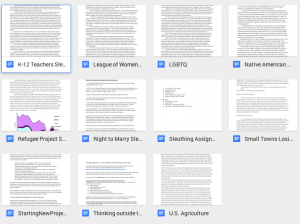 We eventually chose to delve further into the issue of marriage, not only because it was (and still is) a hotly debated and discussed topic, but also because we wanted to compare the harships and stories of other "non-traditional" marriages and unions, both historic and current. Orinignally we focused on four different topics: interracial marriage, same-sex marriage, interfaith marriage, and intercultural marriage.

Now that our project is becoming something more than just words on a piece of paper, I am really able to appreciate the people in our community that have shared their stories with us. Throughout the whole first year process, I met so many people who were really passionate about our the right to marry. Everytime a new project begins, I meet more and more individuals who truly open my eyes to the amazing and diverse Champaign-Urbana community.

One of the stories that has struck me is of Kathleen Robbins, a transgender woman who served in the Marines and married a women before her sex reassignment surgery. Ms. Robbins shares an abundance of stories of her life that we hope to include into our final documentary. For now, I want to share just a short segment of her 1.5 hour interview.

"I did all the normal things for a boy; I played sports, I was an Eagle Scout. But I also had a secret that I was carrying along all the time. I knew two things about that secret. Number one:  it was impossible.  Number two:  it was shameful. So I did everything I could to avoid that."

I feel that this segment, although quite short, really encompasses what a lot of youth are going through today. Many of the interviews we have gathered this past year, and in other years past, have opened my eyes to information and experiences that I would not have dreamed of knowing otherwise. So although this is my final year and my final project, I know that my years as a WILL oral history intern will stay with me for quite some time.

More on The Right to Marry