World leaders are gathered in France to mark the 70th anniversary of D-Day, the day some 150,000 Allied troops landed in Normandy and began the liberation of France and Europe from Nazi occupation during World War II.

NPR's Eleanor Beardsley called the area overlooking the American cemetery in Colleville-sur-Mer, where thousands of U.S. troops are laid to rest, "one of the most beautiful places on Earth."

"Imagine this big, high bluff of a green, perfectly manicured cemetery with rows of white crosses and these beautiful parasol pine trees that looks down on Omaha beach," she reports on Morning Edition. "It is an absolutely breathtaking place."

President Obama and French President Francois Hollande laid a wreath at the U.S. cemetery Friday and expressed their gratitude to the soldiers who fought to liberate Europe from Nazi Germany.

"America's claim — our commitment to liberty, to equality, to freedom, to the inherent dignity of every human being — that claim is written in blood on these beaches, and it will endure for eternity," Obama said.

People wearing clothes in the style of the World War II era look toward the sea Friday on the beach of Arromanches, western France. Ceremonies for the 70th anniversary of D-Day included an artistic re-enactment of the coastal assault. (Thibault Camus/AP)

Hollande added: "France will never forget what it owes these soldiers, what it owes the United States. Vive l'Amerique! Vive la France! And long live the memory of those who fell here for our liberty."

Here's more on today's events from The Associated Press:

"Hundreds of Normandy residents and other onlookers applauded, then formed a human chain on the beach.

"The glorious sun that rose as they arrived shone through the day on a land where paratroopers' corpses once hung from trees and medics dragged wounded soldiers from blood-swirled waves."

Eleanor described a "love fest" for the 3,000 or so veterans who have returned for Friday's ceremonies. For many of them, now in their 80s and 90s, this trip to France could be their last.

Obama's remarks touched on the sacrifices of those troops and many others who fought and fell during the war.

"These men waged war so that we might know peace," he said. "They sacrificed so that we might be free. They fought in hopes of a day when we'd no longer need to fight. We are grateful to them."

Nineteen world leaders — including German Chancellor Angela Merkel — gathered to pay tribute to those whose sacrifices brought peace to Europe. Among them was Russian leader Vladimir Putin, whose handling of the ongoing Ukraine crisis set off the worst tensions with the West since the end of the Cold War.

But, as Eleanor noted: "Today all that is going to be put aside, because today Europe, Russia — they're coming together to commemorate the magnitude of this common effort to defeat the Nazis."

Indeed, on the war's eastern front, the Soviet Red Army lost millions of soldiers but demoralized the Nazis at the 1942-43 Battle of Stalingrad.

The D-Day landings — officially called Operation Overlord — were planned in secret and included landings on five Normandy beaches: Gold, Juno, Omaha, Sword and Utah. Thousands of Allied troops were killed, but the operation broke Hitler's back on the western front.

"The president of the VFW [Veterans of Foreign Wars] told me he wants to see me at the 75th, but I don't know," Schlegel, a paratrooper of the 82nd Airborne Division, told the AP. "My head's still here, but I'm not sure about my body." 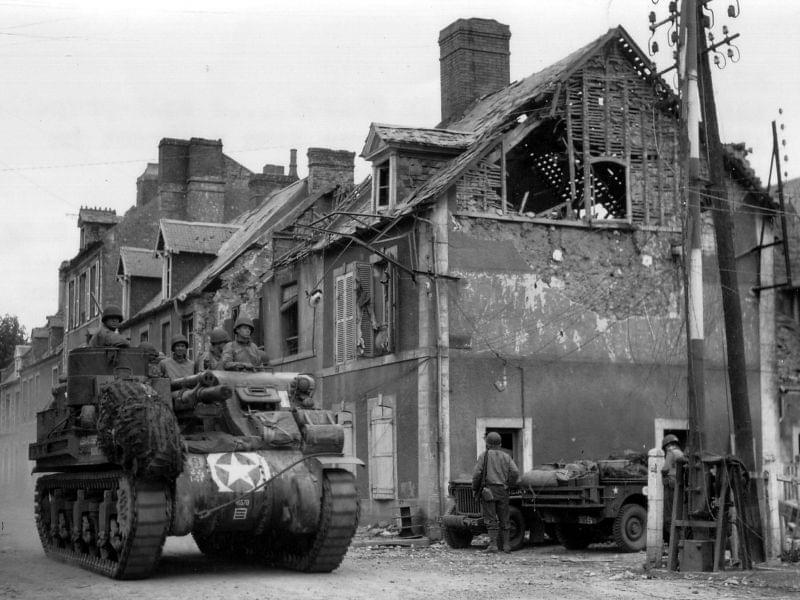 70 Years After World War II Ends: A Local Look Back