After Same-Sex Marriage: What’s Next In Fight For LGBT Rights?

Marriage for same-sex couples is now the law of the land. While it took effect in Illinois in 2014, the United States Supreme Court made it available across the country earlier this year. So what's next in the push for rights in the LGBT community? That's a question I posed at a recent conference in Springfield.

Grayson Alexander is 16 with short, curly hair. A transgender person, Grayson prefers to go by neutral pronouns's like "they", "them" and "their." Grayson is a junior at Springfield high School and the current president of GSA:

GRAYSON: "GSA traditionally stands for gay/straight alliance, but at my school we have changed it to gender/sexuality alliance in order for it to be more inclusive. As a transgender/non-binary person it's a really big deal to have gender neutral and gender inclusive bathrooms because it's really hard for me to go anywhere in public. Also, I want the road to changing names and changing gender markers to be free of loopholes because it's a ridiculous amount of money you have to spend in order to be legally recognized as yourself."

Grayson and I are standing outside of the State House Inn in Springfield, directly across from the capitol where the gay marriage law was approved two years ago. The sentiment about being more accepting of people regardless of their gender-expression is one I hear a lot today at the conference put on by advocacy group Equality Illinois. About 100 people attend. What's becoming clear, in part through gatherings like this one - is that the push for more LGBT rights is not over, but it is more nuanced now that a major target like same-sex marriage has been won.

Back inside the building, there's a workshop about breaking the gender binary and living outside of gender norms. It's also about how to respect those who do, even if you are cisgender - that is, your gender identity and the sex you were assigned at birth do match up.

Patty Dillon is the director of field operations for Equality Illinois and helped lead the talk. She says one of the priorities going forward is educating others:

DILLON: "What we know from throughout history is that changing laws is just the first part, and now it's about changing everyone's hearts and minds and making sure laws are properly implemented, but also that LGBT individuals live a complete and full equality within their life. ... there's a lot of things that need to be addressed that can't necessarily be addressed via legislation and a lot of that is about education and building networks and having folks meet people who are not like themselves, it's already started - but continuing to facilitate that conversation."

Sara Jo Malinkse is also with Equality Illinois. She says one priority in the movement is to make sure rights don't get slowly chipped away, and:

MALINSKE: "I think a movement-wide priority that's really exciting is that people are bringing this inter-sectional lens to the forefront of the movement, and addressing that in a lot of the legislation, a lot of things we have worked on affect the most privileged of our community - and those who maybe experience housing issues, low-economic status - those folks are not necessarily affected as greatly by the larger wins and we need to be incorporating those voices and bringing them to the forefront. And I think movement wide that's starting to happen, it's really exciting.”

While across the country many states have laws in place to protect gay people from discrimination, the laws are lacking when it comes to those who are transgender.  In Illinois, the Human Rights Act provides many of the same protections to both groups. Still, it's a fact that trans people face higher rates of violence, suicide, and discrimination when it comes to things like housing and employment.

Marcus Fogliano is the president of Peoria Proud, a non-profit in the city that provides support groups and resources for the LGBT community there:

FOGLIANO: “I identify as not a part of the gender binary, male or female - I identify as gender-queer. For many people it comes very easily, you see someone who looks masculine you use the pronoun 'him' or 'he' and same with female; 'she' or 'her.'  So for individuals like myself who don't identify as male or female we may use pronouns such as "they", “them” and 'theirs.'

I think the next major hurdle is really addressing just discrimination in general. Yes - now individuals can get married, but there was just a case the other day where a couple got married, went on their honey-moon, and the hotel would not let them stay in their hotel. I think that's really the next big hurdle - getting the non-discrimination in the workplace laws passed because also again - you just married your partner, you go back to work and they fire you because you just married your partner and you have no legal protection in a lot of states. Illinois thankfully does have that protection.”

Not everyone at the conference is gay or transgender. Martin Woulfe is a married father, he's also the minister of the Abraham Lincoln Unitarian Universalist Congregation in Springfield. Many of its members lobbied in support of gay marriage in the state.

WOULFE: "I think that the next step for us locally here in Springfield and in central Illinois is to have an honest discussion regarding religious liberty. There are people who are trying to roll back the advances in terms of acceptance and marriage equality ... There are certain faith traditions which are martialing their forces and trying to re-frame the discussion around religious freedom. Where as I would see that as wrong on so many levels. We have to convince our fellow citizens that what we are trying to achieve is basic decency toward our family members, friends, co-workers...”

Of course not everyone agrees. Some think gay marriage was a step in the wrong direction - that it goes against what marriage stands for. In the national spotlight, a county clerk in Kentucky refused to issue marriage licenses for same-sex couples and argued doing so would go against her own religious freedom as an Apostolic Christian.

Andy Manar is a Democratic State Senator from Bunker Hill and supported making same sex marriage legal. He was at the conference in Springfield and answered questions from the audience about how to further legislation that would help support the LGBT community.

MANAR: "I think it's important from a legislative perspective that there's always a dialogue on how to identify and eliminate discrimination that exists in our laws. Maybe not on purpose - but society changes, and our laws have to change with society."

Jonna Cooley has long made it a priority to make sure LGBT individuals are recognized as valuable members of society and provided with resources like support groups, STD testing, and even shelter for those who need a place to stay. She runs the Phoenix Center and started Springfield's annual Pride Parade and Festival. Like the rest of the people I have spoken with today - I ask her what the she sees as the next priority within LGBT advocacy now that gay marriage is legal across the country:

COOLEY: I think the biggest thing right now is educating professionals, from teachers and social workers and social service agency staff - on LGBT cultural diversity - to help them understand what being transgender is and is not. I think we also need to look at medical providers and anybody who deals with the general public in terms of what their forms say; how they are presenting information to their clients - some of those forms and how we talk to people is so heterosexuality based, and so I think we have to start looking at more than just male and female ... we have to open that door to catch the professionals up with how much progress the LGBT community has made."

Education on the various issues still facing gay and transgender people is a big part of what I hear is a priority today. It's part of why a conference on LGBT equality like this is happening in the first place. Though the question remains as to whether politicians and others are ready for more change. 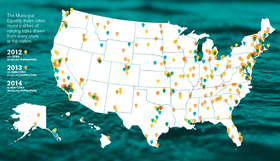 From the Closet to the Courtroom: Five LGBT Rights Lawsuits That Changed Our Nation