The signing of Illinois' new abortion rights bill was an important moment for Sharon, who underwent an illegal abortion nearly 40 years ago.

The three different contraception methods Sharon and her boyfriend used had failed. Students with career plans, neither wanted to have a child.

In 1970, abortion was illegal in Illinois. Through an underground women’s group, she learned she could go to Mexico City to end her pregnancy.

“The first thing that they wanted to do is count the money,” she said. “There was nobody that asked me any questions about my medical history, nothing.”

She woke from anesthesia in what she describes as a pool of blood. She tried to seek help, but there was no one in the room. Now 70, and an ardent abortion rights supporter, she  says she’s surprised she survived the ordeal. Sharon is not her real name. She asked that we not use it because she fears for her safety.

She celebrates the enactment of a  comprehensive abortion rights law that Governor J.B. Pritzker signed yesterday. It is known at the Reproductive Health Act.

Illinois law still permits abortion up until fetal viability, which is generally thought to be 24 weeks, unless there is a risk to the life or health of the mother. But it also now requires private health insurers to cover abortions if they provide pregnancy-related benefits. It repeals Illinois laws found to be unenforceable like a so-called partial birth abortion ban; the need for a husband’s approval of his wife’s plan to terminate pregnancy; and a 1975 law that contained criminal penalties for doctors performing abortions.

“Illinois really is pursuing policies that protect rights that are much broader than abortion,” said Elizabeth Nash, who follows abortion rights for the Guttmacher Institute, a think tank and reproductive rights advocacy organization. “We're talking about protecting the right to pregnancy, and the right to maternity care and the right to contraception and sterilization. And that goes farther than any other law that we have on the books. “

Illinois, in its preservation of abortion rights, is an outlier. With a new conservative majority on the U.S. Supreme Court, a wave of states in the South, the Plains and Midwest have passed measures aimed at limiting abortion rights in hopes of seeing Roe v. Wade overturned. In fact, this year, 17 states have passed 53 separate restrictions on abortion, according to the Guttmacher Institute.

Nash, who follows state policy on abortion for Guttmacher, points out that some of the states with the most restrictive laws border Illinois, including Missouri, Indiana and Kentucky.

“For conservative legislators, they saw an opportunity to pass the abortion bans in the hopes of kickstarting litigation that would put an abortion case squarely before the court in the next couple of years,” she said. “On the other side, progressive legislatures like Illinois, New York, (and) Vermont, were looking to protect abortion rights, because they saw the same threat at the Supreme Court level.”

State Rep. Kelly Cassidy, a Democrat from Chicago, led the charge in the Illinois House.

“Just because we're seeing these increasingly escalating attacks against women's rights happening around the country, that’s not a foregone conclusion that there aren’t people and states who are going to stand up for women's rights,” Cassidy said. “And I'm really proud that Illinois is taking that stance in this way.”

Not everyone is on the same page.

Former Republican Illinois lawmaker Peter Breen, who is an attorney with the anti-abortion Thomas More Society, welcomes the wave of restrictions and vehemently opposes the RHA.

“The Illinois Reproductive Health Act is the most radical and broad abortion-promotion legislation of its type in the country,” he said. “It goes through Illinois law in 126 pages and repeals almost every protection for health care workers.”

The Roman Catholic group has gone to court trying to block laws — like the Health Care Right of Conscience Act — which Breen says could put practitioners with a moral or religious objection in violation of the RHA. He says the organization is considering another lawsuit to make sure the RHA doesn’t further expose health care providers with objections to criminal punishment.

But the RHA maintains the exception under the Health Care Right of Conscience Act for those with a moral opposition to providing abortion care, according to state Sen. Melinda Bush’s office. Bush, a Democrat from Grayslake, was the chief Senate sponsor of the RHA.

Another of Breen’s concerns with the RHA is that it “elevates abortion to a fundamental right, with stronger standards than the right of free speech or the right of freedom of the press,” he said.

Bush says she believes abortion is a fundamental right and wants more legislatures to follow in Illinois’ footsteps on the issue.

“What we've seen across the country — it is very clear that there is a war on, I would say, on women's rights, women's equality, and certainly women's reproductive health,” Bush said. “We've seen it happen across the country. I do believe this is something that we have to stup and fight for.”

Illinois Issues is a weekly series, featuring reporting and analysis taking you beyond the daily news and providing a deeper understanding of our state. 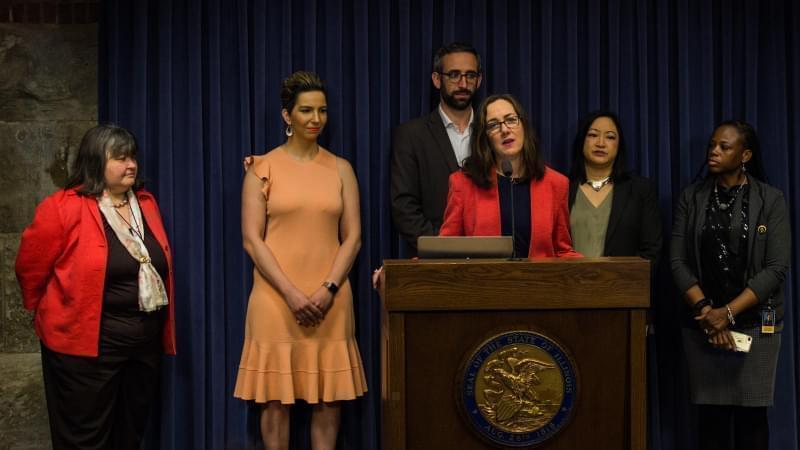 Cassidy: Abortion Bill Will Be Heard