The story of the engineers and ironworkers who built Eero Saarinen's Gateway Arch never gets old, and Wednesday marks the 50th anniversary of "topping out" day — it also might be one of the last opportunities for St. Louisans to meet the men and shake their hands.

Because a standard monumental shape — an obelisk, rectangle or dome — wouldn’t do for Saarinen, the Arch remains a one-of-a-kind monument built of 630 feet of Wow! His design was modern and bold:  a sleek and outsized arch of gleaming stainless steel on the St. Louis riverfront that would celebrate America’s pioneer spirit.

But taking Saarinen's concept from paper to sky also required vision from the craftsmen who built the monument — along with a can-do spirit,  American ingenuity, courage and muscle.

On recent anniversaries, the Jefferson National Parks Association has convened a group of the the builders to meet and greet park visitors.

Although the gathering is always popular with the public, this year will marked the final official gathering, according to Liz Forrestal, senior director of programs for the Jefferson National Parks Association.

“Their numbers are getting smaller and many are not as healthy. And it is a trial for them to attend these events sometimes,’’ she said. “We thought of the 50th as the opportunity to have one grand celebration, to come shake their hands and meet them and thank them for what they’ve done.”

Mary Leonard spoke to several of the builders who attended. Here are excerpts from those interviews:

Comporato was 26 when he started working on the Arch. He was a radio operator and directed the keystone section into place.

When I first came on the Arch, I was part of the raising gang crew — the men who would lift the sections up, hook onto ’em, land ’em and do the welding and fitting of the sections. That type of ironworker work. One of the phone men left, and the foreman up there just up and told me, 'You’re the new phone man.'

I did that from probably 300 feet up.

2. You were at the top, directing the crane operator who was maneuvering the final section into place. What was that like?

He was located on the ground where he couldn’t see. We had to draw him a mental picture of everything we were doing.

There were quite a few people around in boats and, if I had to guess, I’d say there were thousands of people down there. Everybody in the city of St. Louis seemed like they quit what they were doing and were just interested in watching that be put into place. And I think they had the Boy Scouts and the city officials and the mayor.

For a while [during the months of construction] the readings were like a foot off, and they finally figured out the sun hitting the south leg would move that steel that much. On the last day, they had the St. Louis Fire Department run cold water on the back side of the south leg to keep the steel from expanding.

3. Did you realize the magnitude of the project?

I didn’t have a clue. It was generally just another job to the workers on it. As it got higher and higher, it got more significant, and it was beginning to generate a lot of interest. There were people that would come every day and take pictures and sit in their cars and watch the construction going on.

It was really a pleasure to work on the Arch. It was refreshing to get to do something different than ordinary iron work that you generally do on the construction of buildings and bridges and things like that.

Everybody’s got the same questions about the height of the Arch and how many men were in the crews and they’re interested in how the thing was erected.

5. What was it like up there? Were you ever afraid?

The engineers had everything planned out so well, I really didn’t think I was in danger except for when we got into some high winds from time to time, and it would start to shake the Arch more than usual. There was one day in particular when we all had to get down because it got to moving so much up there.

To me, the worst part was the hot, hot days with the sun reflecting off the Arch and you’re getting that radiant heat and the heat from the welding. And the high winds and the snow and the ice. That was probably the worst part of the job.

Wright, born and raised in St. Louis, earned his engineering degree at the Missouri School of Mines, now the Missouri University of Science and Technology in Rolla. He worked for MacDonald Construction Co., the general contracting firm hired to construct the Arch. He was 20 and still a college student when he joined MacDonald in the late 1950s.

1. What was your job on the Arch project?

I was a civil engineer. We had to remove what at that time was an old railroad trestle that ran along Wharf Street (that became Leonor Sullivan Boulevard), build tunnels and relocate the railroad underground into tunnels that exist today.

The steel and construction of the Arch itself, were done by the Pittsburgh-Des Moines steel company. They had their own project manager, engineers and the credit for construction and how it finished goes to them.

2. Did you have to work on the monument, as it grew taller?

The winds and temperature varied quite a bit. Safety was obviously a concern, not only for yourself but for the individuals around you.

I don’t think any of us realized that this would be the celebrity that it’s become — the Arch itself and the people that worked there.

There are many such structures, iconic if you will, around the world at this point, but it’s fun to be associated with one of them, that’s for sure.

Admittedly, it was different than most jobs. It was a job that needed to be finished, and it had a schedule and it had a budget, and we had a job to do individually. The celebrity status wasn’t there when we were building it.

The one thing about building an arch is that nobody is calling and saying can you do this again. In our industry, you can always tell where you’ve been. That one’s tough to miss.

4. Any thoughts on this being the last official gathering of builders?

I’m looking forward to the builders day. Wish it were to be at the Arch. It’s not. It’s going to be at the History Museum. Some of us amongst ourselves will kiddingly say, ‘Who’s in charge of timing?’ They had 50 years to figure out the last one we’re going to have, and they’re going to miss it by more than two?

The builders group is getting smaller every year. Attrition is taking care of that for us. I’ll miss it.

5. What do people want to know?

Were you scared? That’s always a question. The safety issue comes up.

In the film  [“Monument to the Dream”] you will see men walking on scaffold boards. Really not much safety protection. Most of them are smoking.

You just had to be careful -- and also for those around you. We didn’t have the regulations then that you have today.

If they were afraid, they didn’t stay very long. As the Arch grew, credit is due to the PDM field management for being able to pick a crew that could carry out the task at a pretty good height.

Cherry, a World War II veteran, worked for two years inspecting the work made by welders on the Arch.

1. Your job was to inspect the welds. How did you do that?

We worked at night because we worked with radiation to X-ray the welds.

No one on the Arch could be around you, and you had to stand back yourself so you wouldn’t be radiated. We followed the procedure from the Atomic Energy Commission. You had to rope yourself off with radiation signs.

We went up on the outside of the Arch in an elevator and crawled up the steps to the creeper crane. It was dark. There were no lights except to where you were going to do your work.

I normally tied myself on the Arch with a rope. The wind would blow from 35 to 70 miles an hour down on the river. so we had to be like mountain climbers. We tied ourselves on so we wouldn’t be blown off the Arch.

I had a thing happen to me one night on the north leg of the Arch, long before it was completed. A rod broke off and hit me in the mouth and I had six stitches. They took me down to Alexian Brothers Hospital. They sewed me up, and I went back down and finished my work. That same night. And there was a rain storm.

3. Were you ever afraid?

As each section was X-rayed, you got higher and higher and higher. Weather would change. It was cold. The wind was terrific some times. Sometimes barely blowing. Hot. Rain. Storms. The Arch to me stands as a triumph  of men working at that height at that time.

But a lot of people got to a certain height and would say, ‘That’s it. No more. I’m not going any higher.' And they would quit their job.

4. You had an important job.

Yes, the welds were critical.

In my opinion, the Arch is structurally sound, and in relating to what I saw of the work done on the Arch, I think it’ll last for 1,000 years

I think it’s one of the greatest monuments in the United States. There’s nothing in the world that’s like it.

It’s the best job I ever had. 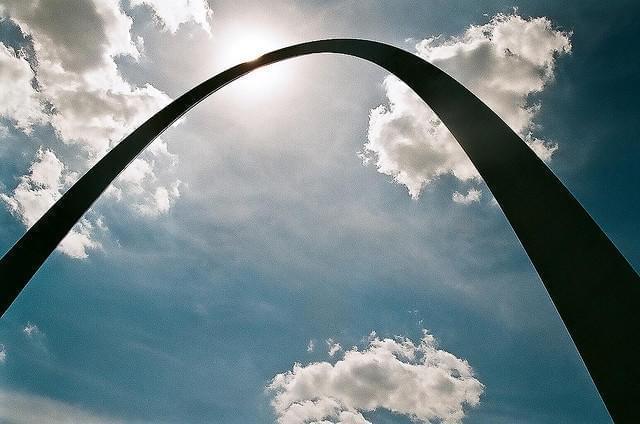 Four minutes up, three minutes down: Listen to a first-timer travel to the top of the Arch