Four minutes up, three minutes down: Listen to a first-timer travel to the top of the Arch

The Gateway Arch reaches the big 5-0 this year, and is thus deserving of citywide celebration — not only for its beautiful, imposing design, but because the Jefferson National Expansion Memorial is one of St. Louis’ top tourist sites, attracting more than 2 million visitors every year.

While many duck into the Old Courthouse and explore the Mississippi on the Becky Thatcher or the Tom Sawyer, the big draw is the Arch itself — all 630 feet of it.

The Journey to the Top requires visitors to acclimate to the confined space of a tram car and, of course, to the Arch’s prodigious height. But the payoff is the expansive birds’-eye view of St. Louis and its environs, provided by east- and west-facing windows at the top of the Arch.

It’s a view that enchants visitors from all over the world — and yet, some of St. Louis’ own have never had the pleasure. David Reddick of Kirkwood joined me on a trip to the Arch to commemorate and discuss the fiftieth anniversary of the city’s symbol.

It’s a four-minute ride to the top of the Arch. Reddick and I settled in a capsule-like tram car with hard white seats and a reassuring window by which we could track the car’s progress. The ride started slowly and the tram tilted as its height increased — a little ‘clunk’ every five seconds or so corrected it, straightening us out to travel another several feet skyward.

Reddick, unfazed by the rocking of our tram and fascinated by our view of the Arch’s internal organs, told me he moved to St. Louis under auspicious circumstances.

“I left Miami 20 years ago today,” he said on our creaking journey upward. “And as I was driving out of Miami, I was listening to WLRN, public radio there, and they had the St. Louis Symphony playing [a] Mahler symphony. And I thought, 'What a great way to start my move to St. Louis.’"

Reddick said that every time he comes to St. Louis from the east, he has to crane for his first look at the Arch.

That same day, Reddick saw the curve of the Arch for the first time. Now, he said, it’s the first thing he looks for when he drives into St. Louis from the east.

“Every time I’m coming in, I’ve always got to crane for the first look of the Arch,” he said. “It tells me I’m within driving distance now; I’m almost home. So it’s a very welcoming feeling that I have.”

At the top, we spied other landmarks in the metro area: Cahokia Mounds, Busch Stadium, East St. Louis, the Eads Bridge, the condos and offices of Clayton, and the Gateway Geyser. Reddick noted that the Arch has become known nationally as a symbol of St. Louis’ role in a critical period of American growth, and globally as a memorial to American trade, industry and expansion.

“The idea of the Arch is something that’s really meaningful,” Reddick said. “Everyone in the country or the world has seen pictures of the Arch.”

The top swayed slightly in the press of the wind — nothing to worry about, the greeter at the top said, as the crest of the Arch can bend nearly 10 inches on both sides, and was made to withstand an earthquake. Even so, leaning over the viewing area to get a good look through the windows induced an odd sense of weightlessness.

So, too, does returning to earth. It is only three minutes to the bottom of the Arch — gravity at work — and on the way down, Reddick said that he would be back to visit again.

“It’s really fascinating to be inside it and to know how hard people worked to make it happen, and to give it to the people of this community to call their own.”

The ticketing and visitor center are at the Old Courthouse as renovations to the grounds continue: 11 North 4th Street, St. Louis, Mo. 63102 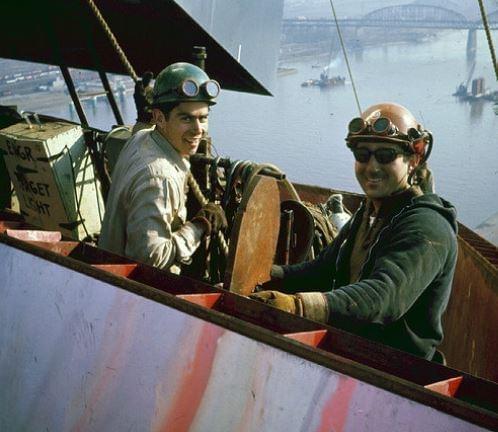