The cities of Champaign and Urbana, along with the University of Illinois, are asking for input for a longterm, multi-million dollar street improvement project. Students and community members have until next month to weigh in on its plans for "MCORE" — the Multimodal Corridor Enhancement Project.

The twin cities and the University received a $32 million federal TIGER grant for the project, which aims to completely re-do five stretches of streets that link Champaign, Urbana and campustown.

The goal is to reduce traffic accidents between cars, buses, cyclists and pedestrians by designing "complete streets," where the four modes transportation don't have to compete.

U of I graduate student Marcia Klopf says she's had a few close calls while on her bike.

"A couple times with cars just because...they do think that they own the road so I'm excited to see ... the raised bike lanes I think will be really great to direct traffic a little bit more and provide a safer area for cyclists," she said.

Fellow cyclist and Urbana Alderman Charlie Smyth almost exclusively uses his bike to get around town. He says the layout of many streets can make for scary moments, especially when a driver or pedestrian is distracted by a cell phone.

"Oh, I have close calls regularly," he said. "People driving motorized vehicles don't see you. They can be looking right at you and they don't see you. ...Almost all of the conflicts I've had, the person is distracted in some fashion."

MCORE also aims to improve life for those who depend on the Champaign-Urbana Mass Transit District, by reducing congestion to ensure more buses remain on schedule. That's something graduate student Evan Alvarez is grateful for. He says he uses the Green bus line daily.

"I love it," he said. "I'm from Alabama where we don't have public transportation. It's amazing."

Construction for the first phase of the project, the stretch of Green Street between Wright and Race in Urbana, is set to begin next year. The full five projects should be done by 2019, but the grant is active until 2021.

And for those who envision four years of a construction nightmare, project manager Cindy Loos has some advice: 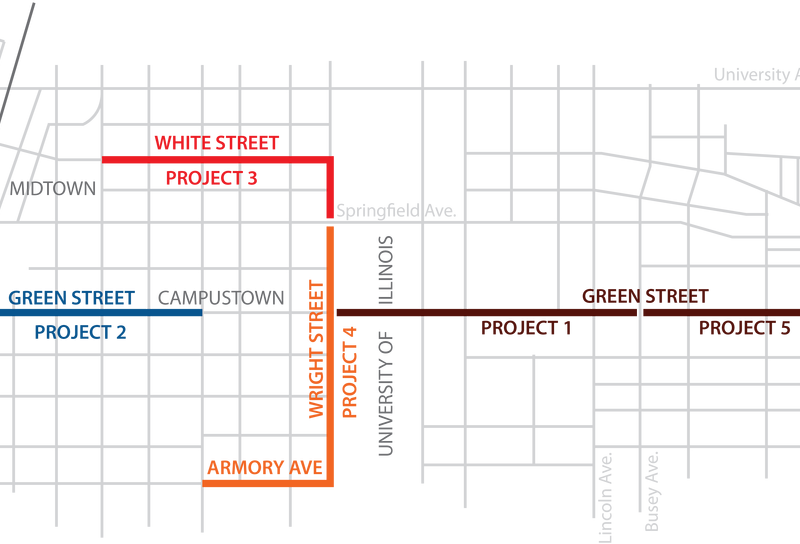