Harness racing --- horses racing at a trot or gait while pulling a driver in a two-wheeled cart --- is a longtime feature of the Champaign County Fair in Urbana. But races that were held every weekday at the fair a decade ago are now reduced to a single session set for Tuesday evening at 7 PM.

Fair Board President Mike Kobel says the decline of harness racing is a statewide problem.

“The state of harness racing in the state of Illinois has really dwindled,” said Kobel. “Support at the state level through the Department of Agriculture is virtually nonresistant. The future is unknown. In fact we don’t know if we’ll have a program next year.

Andy Samone, the executive director of the Illinois Harness Horseman’s Association, says the decline of harness racing is a statewide phenomenon that troubles him. Although he lives near the Chicago area racetracks (where only Hawthorne Park offers harness racing this year) Samone says he likes to get out to harness racing at the county fairs, because they offer a closer view of the action.

Samone blames the statewide decline in harness racing on state laws which bar Illinois racetracks from supplementing their income from betting on the horses with slot machines. Such so-called “racinos” are allowed in states like Indiana. 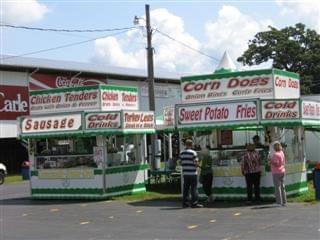