Despite The Headlines, Chicago’s Crime Rate Fell In 2013

In 2013, Chicago newspapers and television stations kept a daily deadly count, listing those slain each day, most by gun violence.

One of the most noted occurred early in the year when Hadiya Pendleton, 15, was shot and killed about a week after performing at inauguration events in Washington, D.C., with her high school band. Two young men were charged with opening fire on Pendleton and a group of friends standing in a park about a mile from President Obama's Chicago home.

The city's gun violence has also deeply touched the life of Shirley Chambers. Over a nearly 20-year span, she lost all four of her children to shootings. The last one, her 33-year-old son, Ronnie Chambers, had said the murders of his three siblings made him decide to change his life. He was killed this year.

"It's too much out of control now. They've got to get stiffer penalties for these guys," said Shirley Chambers. "They go out here and murder people for no reason."

In September, a shooting in a Chicago park left more than a dozen people wounded, including a 3-year-old boy. Chicago Police Superintendent Garry McCarthy says in that shooting, assault-style weapons were used.

In 2013, at least 412 Chicagoans lost their lives violently — about 100 fewer than a year ago. That's more than those murdered in New York, and more than Los Angeles. But a Yale University analysis says that despite Chicago's grim numbers, the city's crime rate is not exceptional when compared with other large cities. It ranks Chicago 19th, with violent crime levels similar to those of Houston or Minneapolis, and half that of Detroit or St. Louis.

The study, which looks at Chicago's crime levels over nearly 50 years, says the city is on track to have the lowest crime rate since 1972 and the lowest murder rate in 45 years. McCarthy says it's not victory, but it is real progress.

In a city of neighborhoods, though, crime rates are not equal, and many of the shootings here are gang-related in the city's South and West sides. 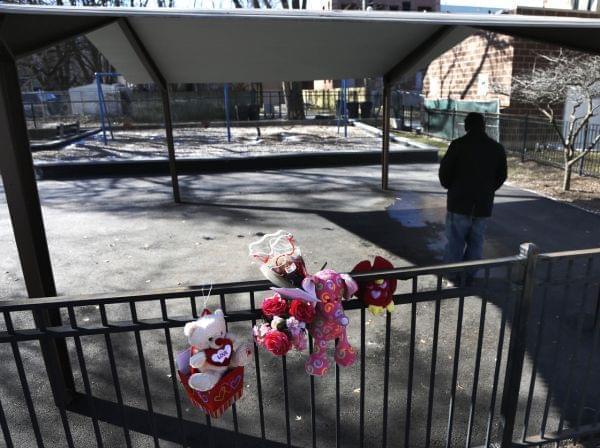 A memorial at a Chicago park marks where Hadiya Pendleton, 15, was shot and killed earlier this year. (Charles Rex Arbogast/AP)

Community activists and ministers recently attended a public hearing convened by the Rev. Al Sharpton. "They say that the shooting is down. Well, if one person is shot, it's one too many," he said.

People like Lucy Moore don't believe the rate of gun violence in Chicago is actually down.

"I think it's poppycock. They're not telling all of it. The murder rate is even higher. They just want to save face, and that's what I feel. It's not down. I see too much shooting and too much killing," she says.

Natjuan Herrin lives on Chicago's West Side and is also skeptical. "Well, where I come from, they shoot every day, all day, but it's not safe nowhere in Chicago. Wherever you go, it's not safe," Herrin says. 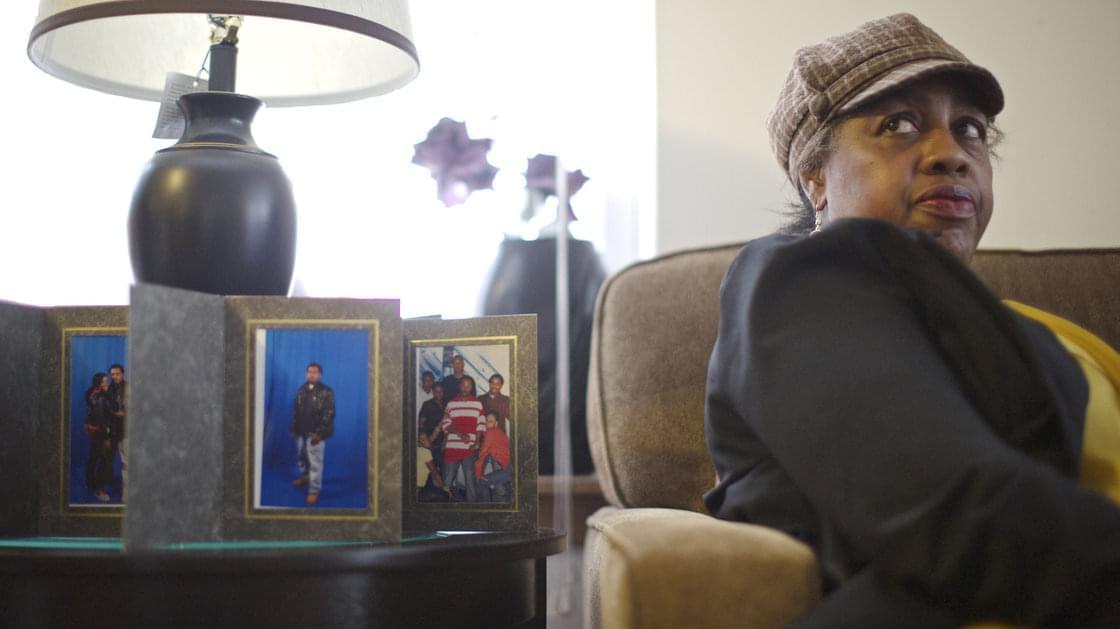 Shirley Chambers lost her four children — three boys and a girl — to gun violence in Chicago over a period of 18 years. The last of her children, her son, Ronnie, was killed in January. (John Gress/Reuters/Landov)

Chicago Mayor Rahm Emanuel says that while he understands that skepticism, the numbers don't lie.

"We are not going to rest until people feel the reality of these numbers. It is day-in-and-day-out work, and I'm not going to let anybody working for me rest until that feeling is shared throughout the city," Emanuel says.

Emanuel has pushed for thousands of summer youth jobs, more education initiatives and recreational opportunities, which he says have resulted in less gun violence. He's calling for tougher gun laws, including mandatory minimum sentencing for anyone possessing an illegal gun. That effort comes as U.S. Attorney General Eric Holder has announced changes that would relax mandatory sentencing requirements — at least when it comes to drug policy. But Holder says the federal government will help Chicago as best it can.

"The Justice Department will seek new ways to ensure that resources provided to the Chicago Police Department by our Asset Forfeiture Fund can be better used to keep more officers on the beat," he says.

Holder was in Chicago for the swearing-in ceremony for Zach Fardon, the U.S. attorney for northern Illinois. As an assistant U.S. attorney, Fardon successfully prosecuted former Illinois Gov. George Ryan on public corruption charges. Fardon says he doesn't believe the city can arrest its way out of its gang problem.

"It is too big. It is too deep. It is too insidious. It starts at too young an age," Fardon says.

He says that even though his office will continue to focus on public corruption, white-collar crime and terrorism, it will also work on violent crime. "We're all in. We'll be aggressive and strategic in going after the worst of the worst," Fardon says. "We do have limited resources, and so we have to focus on the gang leaders, and we have to focus on the violent offenders. And we will do that, and we'll do it with vigor."

It's an attitude that the mayor here and even his critics say everyone must have — just ask Shirley Chambers.