Updated results from statewide, congressional and local races in Illinois' primary election. Check back throughout Tuesday night for the latest information from the Illinois Public Media newsroom.

Voters in Arthur, Illinois overwhelmingly rejected a proposal to sell the water and sewer system to a private company.

The village in Douglas and Moultrie counties is struggling to pay for aging water pipes and mains.

Matt Bernius, the village's mayor, had estimated a sale of the property to Aqua Illinois would generate more than $5.5 million dollars.

But opponents worried that customers in Arthur would pay more to subsidize water systems in other communities served by Aqua Illinois.

Nearly 80% of voters in both Douglas and Moultrie counties voted "no" on the proposal.

We talked earlier about how Champaign county voted in the presidential primary. Here's how Danville's votes fell: 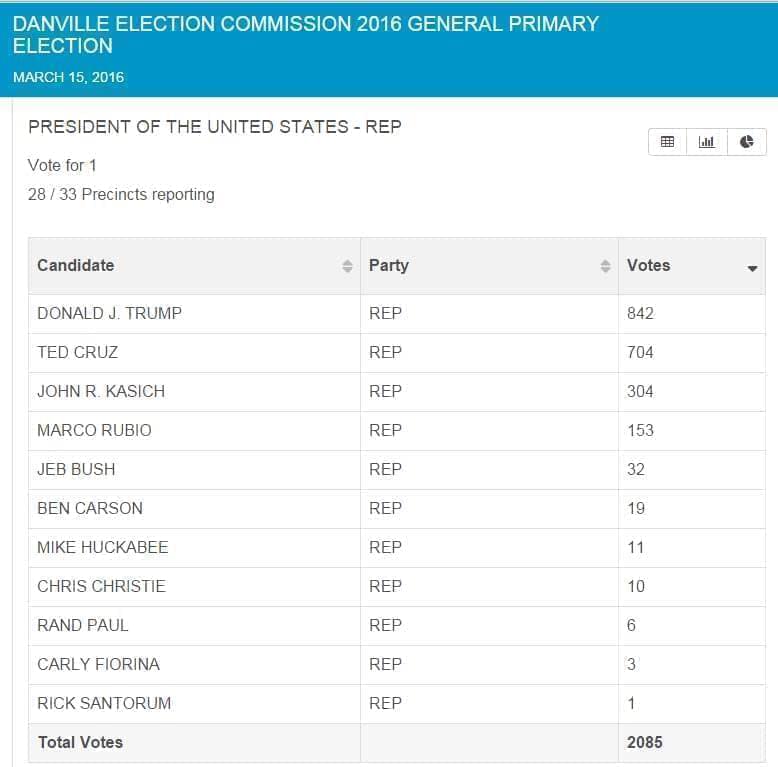 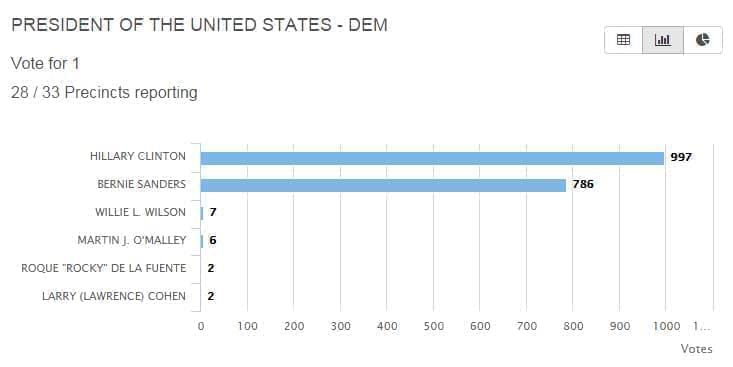 Former state legislator Brad Halbrook is in a position to return to Springfield, besting two challengers Tuesday for the GOP nomination to the 102nd District House seat.  The Shelbyville business owner had the endorsement of Governor Bruce Rauner.

Halbrook says Tuesday’s results show voters in his district back the governor’s business reforms, or the so-called ‘Turnaround Agenda’.

“Hard work, team effort, like we’ve said all along, you know, the people are interested in these reforms," he said.  "We ran on the issues of reform all winter.  Evidently, that’s what they’re looking for.”

The current officeholder, Champaign Republican Adam Brown, is stepping down to return to his family farming operations.

No Democrats have filed to run for the seat this fall.

Republican incumbent State Representative Reggie Phillips has won the GOP nomination in the 110th Illinois House District, according to the Associated Press.

The Charleston businessman was first elected to the Illinois House in 2014, succeeding Republican Brad Halbrook, won the nomination Tuesday in the neighboring 102nd House District. His businesses include residential and commercial building construction, student apartment rentals, a hotel, two restaurants and a chain of assisted living facilities.

Phillips says that restoring state higher education funding is his top priority --- and he wants to do it quickly, separate from a budget settlement, which he believes could be slow in coming.

“People understand, up and down the state, we no longer can hold our public universities hostage in this," he said.  "So we have to come up with some sort of solution.  Either we come up with emergency funding, or a funding bill of some sort, for higher education. So we don’t hold them hostage, cause here’s what’s going to happen.  Nobody will really know the fallout, probably until September, October.”

Phillips says by being in a heavily Republican district with no Democratic challenger, he’s effectively been elected to another term with the primary win.

Rodney Davis, the GOP incumbent in the 13th Congressional District, won the Republican nomination tonight. He defeated Ethan Vandersand, of Carrollton, and now faces a three-way race in November against Democrat Mark Wicklund, of Decatur, and Independent David Gill, of Bloomington.

While Hillary Clinton leads by a small margin in Illinois, the numbers in Champaign county are very different:

U.S. Rep. John Shimkus has survived a Republican primary challenge in his bid for an 11th term.

According to the Associated Press, the Collinsville congressman defeated state Sen. Kyle McCarter of Lebanon Tuesday in the race for Illinois' 15th Congressional District. McCarter had hoped to capitalize on the anti-incumbent mood that has dominated the GOP presidential race.

The district covers all or parts of 33 counties in east-central and southern Illinois and a slice of the Metro East suburbs of St. Louis.

McCarter won support from the conservative Club for Growth in one of the few races nationwide where the political action committee targeted a Republican incumbent.

No Democrats filed in the 15th District.

While we wait for Shimkus to speak tonight, here's his interview a few weeks ago with Illinois Public Media:

Voters have ousted the Chicago area's top prosecutor in a Democratic primary race focused on the office's handling of the shooting death of a black teenager at the hands of a white police officer.

Kim Foxx's victory Tuesday over Cook County State's Attorney Anita Alvarez sends her to a November matchup in which she will be heavily favored.

Foxx, a former aide to the Cook County board president, criticized Alvarez over the Laquan McDonald shooting, as protesters and critics scrutinized her investigation as a cover-up. The teenager was shot 16 times in October 2014, an incident that was captured on squad-car video.

Alvarez's office charged the police officer with murder, but not until November, a year after the shooting and hours after a judge ordered the city to release the video.

Donald Trump has won the Republican primary for president in Illinois.

The billionaire businessman won the statewide presidential preference vote on Tuesday to take at least 15 of the 69 delegates available. It's likely he will pick up more as delegates in each congressional district are awarded.

It's still possible they will pick up delegates of their own.

In Illinois, the winner of preference poll wins 15 delegates. Voters elect the other 54 -- three in each of the 18 congressional districts -- by choosing delegates who are committed to a particular candidate.

Those results were still being tallied Tuesday evening.

The matchup between Duckworth and Kirk, who also won his party's nomination, is expected to be one of the most contentious nationwide.

According to a copy of her prepared remarks to supporters, Duckworth says her win is a clear message. And Illinois Democrats are working together to beat Kirk.

She accuses Kirk of running attack ads against her for months.

The longest-serving state House speaker in the nation, Michael Madigan, has fended off another challenge in his Chicago district, according to the Associated Press.

The powerful Democratic leader overcame a challenge from fellow Democrat Jason Gonzales, a 42-year-old Harvard graduate who was the best-funded candidate to face Madigan in recent memory. Gonzales raised nearly $222,000 himself, and Illinois United for Change spent nearly $600,000 on his behalf.

But that paled in comparison to Madigan's multi-million dollar campaign fund.

Madigan was first elected to his southwest side Chicago district in 1971. He was first elected House speaker in 1983 and has held that position for all but two years during the mid-90s when his party lost control of the chamber.

The Associated Press is reporting that Democratic Illinois state Rep. Ken Dunkin has lost his seat in a contentious contest that had President Barack Obama endorsing his opponent, Juliana Stratton.

Dunkin drew the wrath of his party after voting against pro-labor legislation and siding with Republican Gov. Bruce Rauner, who has made restricting the power of unions one of his priorities.

Obama chided Dunkin during a speech at the Illinois statehouse last month, telling him to "sit down'' after Dunkin stood and applauded the president's comment about how voting with the other party doesn't make someone a sellout.

Obama recorded radio and television spots endorsing Stratton a week before the election. Immediately before the endorsement, Stratton's campaign accused Dunkin's team of paying people for votes. A Dunkin spokesman has called the allegations "baseless.''

According to the Associated Press, Kirk and Duckworth won their primaries for U.S. Senate on Tuesday.

Kirk, of Highland Park, says he's "honored to have the backing of my fellow Republicans ... and make sure we beat Tammy Duckworth in November.''

Duckworth has called on the U.S. to admit 200,000 refugees, including 100,000 from Syria. Kirk's campaign calls that "naive.'' He wants to prohibit refugees from entering the country until authorities can guarantee they don't pose a threat.

The race is expected to be one of the most competitive in the U.S.

While you wait for the results to come in, listen to one of our older stories.

State Representative Reggie Phillips of the 110th district is running for reelection against Jonathan Kaye. Jim Meadows from Illinois Public Media sat down with him a week ago to talk about his goals.

Election authorities in Vermilion County say a handful of people were given a ballot covering federal races only, and weren’t able to vote in county elections. County Supervisor of Elections Lindsay Light says the problem happened at a couple of precincts, and many of those ballots were caught before being placed in the tabulator.

Light says the local State’s Attorney and State Board of Elections is looking into next steps, but says voters can’t be allowed to vote twice.

“Every election has its thing. We have always sent out the federal ballots in the past," Light said. "Me personally, I have never experienced this before, this is only my fourth election. But things happen. I’m sure it’s happened in the past. It’s also happened in places throughout the state.”

The News-Gazette reports similar problems occurred at the Danville Election Commission this morning. That office can’t be reached for comment.

Between the city and county election offices seven county board seats are facing primary election challenges, as is the race for Vermilion County State’s Attorney.

Election officials say voter turnout is steady, but may not reach the level seen eight years ago when Barack Obama and Hillary Clinton faced off in the Democratic presidential primary. Still, several polling places are extending hours tonight. Champaign County Clerk Gordy Hulten says anyone in line by 7pm, will be allowed to vote.

McLean County Clerk Kathy Michael reports "really long lines" of voters at Illinois State University. She says student voters are turning out in far heavier numbers than in recent years, at least in part because of on-campus campaigning by supporters of Democratic presidential contender Bernie Sanders.

Voting hours in Sangamon County have been extended until at least 8:30pm, says Stacey Kern, the county's director of elections. The county ran out of ballots at 10 polling places, so they extended the time to accommodate printing and delays.

Increased turnout means the polls will stay open later and more ballots are being printed in Adams County in western Illinois.

Adams County Clerk Chuck Venvertloh said Tuesday evening that he's seeing ``much larger turnout than anticipated.'' He says that's for both the Republican and Democratic primaries. Venvertloh says ballots ran out and more needed to be printed.

Venvertloh says polls will stay open until 8:30 p.m. instead of 7 p.m. He says that will be enough time for voters to cast ballots.

Adams County includes the city of Quincy and areas along the Mississippi River.

No candidate for St Atty on Democratic ballot. Incumbent Randy Brinegar is not seeking re-election.

Referenda (many are in multiple counties:

“Shall the Farmer City Community fire Protection Dis. … levy a special tax at a rate of not to exceed .40% of the value of all taxable property … for the purpose of providing ambulance service?”

“Shall the Bd of Education of Monticello Community Unit School Dis. 25 … acquire & improve a site for and build and equip a high school building, improve the sites of an alter, repair and equip the existing Washington Elementary and Monticello High School Buildings for elementary school purposes and issue bonds of said School District for the amount of $40,900,000 for the purpose of paying the costs thereof?

Does the Village of Arthur Sell the Water and Sewer Property?