The immigration bill that the U.S. Senate Judiciary Committee is expected to take up on Thursday includes a provision for farmworkers that shortens their waiting period for legal residency.

Reyes Alvarez, 56, of Guatemala came to the U.S. illegally more than a decade ago so he could make enough money to support his family back home. Alvarez is an alias to protect his identity because of his legal status.

Alvarez lives in Champaign County, but commutes to another county, where he works at a dairy farm 48 hours a week, milking cows and cleaning their udders. He makes roughly $10-to-$11 an hour. It is work he takes pride in doing even more than growing coffee beans, which is what he did in Guatemala.

“The good thing here is that your job is secure, but over there you are the owner and most of the times you do not know if you will have success with the crops,” Alvarez said through an interpreter.

Despite the added job security, Alvarez’s work in the United States does come with sacrifices. With the exception of a grown son who works with him at the dairy farm, Alvarez has not seen his wife and children since 2001.

Alvarez said his family supports his decision to be away from them.

“My wife is in complete agreement because they’ve suffered a lot in Guatemala,” he said.

Alvarez worries that if he leaves the U.S. to see his family, he will not be able to return.

“Of course I miss my family,” he added. “I think everybody misses their family when you are far away from home. I suffered so much when I crossed the border in order to look for a better life for my family mainly for my kids. My only intention is to give to them an education and then I can come back.”

A proposal in the U.S. Senate could change things for Alvarez, and the estimated 35,000 migrant and seasonal farmworkers living in Illinois illegally.

Depending on their work history, many of these workers could apply for a new ID called a “blue card.”

In order to get it, they would have to pay a fee and show they have paid taxes. After five years, blue card holders could then apply for a green card, which is about half the waiting period required for many other immigrants. 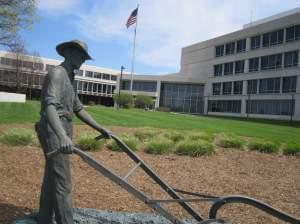 “In the context of immigration reform, these are the people that we must have – an experienced farmworker workforce in this country - otherwise we risk seeing agricultural production of fruits and vegetables primarily - but also of dairy and livestock - offshore,” Nielsen said.

With fewer American-born people growing up on farms and willing to do farm labor, Nielson said immigrants play a critical role in Illinois’ changing agricultural industry.

“A lot of the people who come from Mexico and other places grow up also in rural areas, but they’re working with chickens and goats and they have skills in that area where in the United States, it’s becoming fewer and far between,” he said.

That is something farmer Pat Bain knows all too well.

Bain oversees a farm in McLean County where 70,000 newborn pigs are produced each year. He said for the past 12 years, it has become increasingly difficult to find skilled American-born workers to not only clean and feed the pigs, but also perform other tasks that require more training like conducting artificial insemination and assisting with births and vaccinations. So, he turned to migrant labor to do that year-round work. 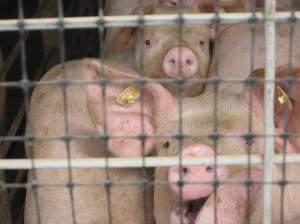 “It’s not a clean job, and it’s hard work,” Bain said. “Everybody has their opinion and their ability to make their choices, but when it comes to producing food, those are the jobs that we have that need to be done to produce the food.”

Bain favors the blue card system, saying it will make it easier to attract and keep skilled workers who are not afraid of being deported because of their legal status.

“Well, we know what happens when you give amnesty to ag workers. They stop working in agriculture,” said Roy Beck, the head of NumbersUSA, a national organization that supports reducing both legal and illegal immigration.

Beck worries allowing more immigrants to stay in the U.S. permanently through the blue card system would drive them away from farm labor, to other jobs that directly compete with U.S. citizens who are looking for work.

Beck points to a federal immigration bill signed into law in 1986, which allowed immigrants who entered the U.S. before 1982 to be eligible for amnesty.

“As soon as they got their green card, they left agriculture and starting working in construction and service,” Beck said. “What they did is not only did the farmers lose their workers, but all of these people began competing with Americans who are trying to make their living.” 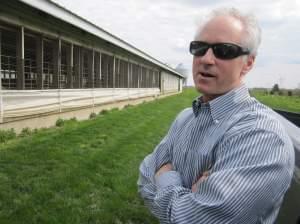 McLean County Farmer Pat Bain (pictured on the left) said his employees, who are Mexican, have been with him for about a decade. They previously worked for a farm in the Quad Cities, and he learned about them from word of mouth.

Many farmers, though, turn to the federal guest worker program to find migrant labor.

Bain said he does not ask his employees questions about their legal status, but does require a social security number so that he can pay them.

He said his big concern is that he could one day lose skilled workers, who could be deported for not being in this country legally.

“If that would happen, the question is where do I go for labor, and if there’s another program does that program work for me?” Bain said. “I guess the only program that there is is the H-2A and that is a temporary work visa in which case the workers come and stay for nine months. Well, my need for labor is 365 days a year.”

For future farmworkers, the Senate proposal would phase out the H-2A guest worker program and replace it with two kinds of visas  --- good for year-round operations or those operating only during the harvest season.

The visas would be good for three years, and could only be renewed once. After year six, a guest worker must live outside of the U.S. for three months before obtaining another visa. 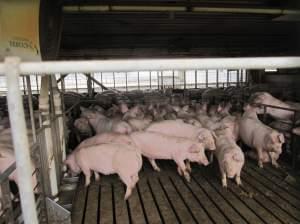 Meanwhile, farmworkers would have added protections, like prevailing wage rates, housing, and transportation.

Miguel Keberlein Gutierrez of the Illinois Migrant Legal Assistance Project said the state does not recognize a union for farmworkers, and he said that is unlikely to change with immigration reform.

However, Gutierrez said he believes farmworkers will have more power to speak up if they are being treated poorly.

"If you’re a resident or you’re a citizen and you’re doing this work, you have more of an incentive to say, ‘You know what, I am going to stand up for my rights if you’re going to rip me off. If you’re going to rip me off, then I am going to sue you to get my money,’” Gutierrez said. “You know, I may not be able to unionize, but I am empowered in the sense that you can’t use the threat of deporting me to keep me from complaining.”

Under the Senate proposal, up to 112,333 visas could be issued each year during a five-year period. The Illinois Farm Bureau said it wishes the cap was higher, but the cap could be adjusted in later years.

As that is happening, current farmworkers, like Reyes Alvarez, would be able to take part in the Blue Card program, which he said he is going to do.

“I think it is good, because a lot of people come here for necessity and they're living in fear,” Alvarez said. “You hear that some of them already have a family here and some were deported and the family - the family is divided, so that's sad.”