When you think summer, you might think of cold beer at a barbecue, maybe a bottle of wine with a Sunday picnic. A lot of people take it for granted that they can just go to the store and pick up alcohol.

While many states have laws restricting liquor sales, Indiana is the only one where you can't buy packaged beer, wine and liquor on Sundays, and it's the only state that regulates alcohol sales based on temperature. Only liquor stores can sell cold beer.

Convenience stores are trying to change the laws, and — in a surprising twist — it's the state's liquor stores that are fighting back.

The convenience stores will tell you this battle is all about, well, convenience for consumers. 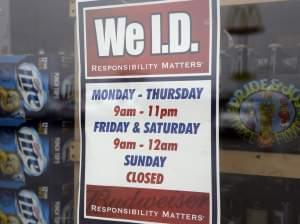 "Not having the ability to sell what our customers want impacts our bottom line," Bridgers says.

Even though Thorntons was founded in Indiana, it hasn't opened a new store in the state since 2006 — and the state's antiquated liquor laws are the reason why, Bridgers says.

"We will continue to invest in other states," he adds, "where laws are more business friendly to our company, and where it makes the most economic sense."

Thorntons has been expanding in bordering Kentucky and Ohio instead. But, along with other retailers, it has also spent the last five years lobbying Indiana's general assembly to change the state's alcohol laws. After legislation failed to gain traction again this year, these retailers filed a federal lawsuit seeking to sell cold beer.

"You don't have choice. You don't have competition," says Scott Imus, who heads the convenience store owners' trade association. "We've done extensive price surveys at liquor stores and find that they add either $1 to $2 on a case of beer, on cold or warm. I mean, Subway doesn't charge more to heat my sandwich."

You might think that liquor stores would have the most to gain from Sunday sales. So why are they fighting to keep Indiana's blue laws intact?

Because Sundays tend to be one of the busiest shopping days anyways, most consumers would rather just pick up their alcohol at the grocery store instead of making another stop at the liquor store later in the week, argues John Livengood, head of the Indiana Association of Beverage Retailers.

Livengood has been lobbying on behalf of the liquor industry for more than two decades. And he argues that allowing Sunday sales would put about a quarter of the state's liquor stores out of business. He accuses the convenience store owners of trying to do an end-run around the legislative process.

"This looks to me kind of like a Hail Mary pass, trying to get done in the courts what they couldn't get done at the legislature," Livengood says.

But what the liquor stores are really resisting is an expansion of cold beer sales, which they argue would devastate the state's liquor industry and cause about half the stores to shut down. So this battle, says Livengood, is really about money.

"They want to come in here and change Indiana's laws so they are the same as they have in a few other states. Why? Because they want to make money," Livengood says.

So liquor stores and convenience stores are each accusing the other of being a threat to the state of Indiana. Meanwhile, it's the state's consumers, who routinely drive across the border to skirt Indiana's alcohol laws, who are stuck in the middle.

From New Albany, Ind., it's a 10-minute round trip to the closest liquor store in Louisville, Ky. On Sundays, that's where nearby Hoosiers go to buy their alcohol. It's not unusual for every car in the lot to have Indiana plates, and that will likely continue unless the laws change in neighboring Indiana.