Gov. Bruce Rauner's State of the State address included proposals for improving Illinois schools, reforms to the state's criminal justice system and support for State Senate President Cullteron's pension reform plan. Here are highlights of the address and reaction to it, from the Associated Press.

Republican Gov. Bruce Rauner is backing a plan pushed by Democratic Senate President John Cullerton. It would give state workers and retirees a choice in retirement benefits. Rauner says it would save $1 billion annually.

Rauner on Wednesday called addressing Illinois' $111 billion pension debt "one of the most critical actions we can take'' to save taxpayers money. He says his lawyers are working with Cullerton's staff to finalize legislation.

The Chicago Democrat says he's "open on all the pension questions'' and is "anxious to see the governor's language.''
___
2:40 p.m.

The group's chairwoman Sen. Kimberly Lightford says the Republican spent his time pointing the finger and "playing the blame game'' during his address Wednesday.

The Maywood Democrat says Rauner talked more about his pro-business agenda items and not about college and social service cuts.

Other black lawmakers mentioned their proposals on education and criminal justice as solutions to the problems facing black communities during the budget impasse.

Lightford said she agreed most with Rauner's stance on education. Rauner said he wants to work with legislators on improving Illinois schools.

In a statement Wednesday, a coalition of unions said Rauner "has been an unmitigated disaster for the working people and most vulnerable citizens of Illinois."

The Republican governor pushed in his State of the State speech Wednesday for many of the same pro-business ideas he's been stressing for the past year.

He also said Illinois' largest public-worker union is pushing in contract negotiations for compensation he described as "out-of-touch with reality.''

Democrats and their union allies have said Rauner's agenda would drive down wages and hurt the middle class. Because of the disagreement, lawmakers have been unable to agree on a budget for the fiscal year that started July 1.

Rauner said during his State of the State speech Wednesday he wants to direct more money to elementary and high school classrooms and early childhood education. He also says he wants to hold schools "truly accountable for results."

The Republican has been a big supporter of charter schools, which typically are not unionized and which some Democrats oppose. Rauner and his wife also have donated significant money to help Chicago Public Schools.

Rauner told lawmakers he wants to lower the prison population by 25 percent by 2025 by implementing suggestions from a commission he convened last year to study the issue.

Rauner made comments during his second State of the State address Wednesday.

He says the state should pursue programs that reduce recidivism and help inmates acclimate back into society and emphasize rehabilitation over imprisonment for some low-level offenders.  Rauner says the commissions reforms "will lead to fewer victims of crimes, a pathway back for ex-offenders, and safer communities for all."

The Republican governor told lawmakers Wednesday during his State of the State address about a plan he's working on with Democratic Senate President John Cullerton. It would give employees a choice between keeping cost-of-living increases in retirement and counting future raises when figuring retirement benefits.

But there's disagreement about whether the plan should include a provision that takes salary increases out of the collective bargaining process. Rauner wants that, but Cullerton does not. Both say they're willing to continue working to agree on a measure.

Illinois has the worst-funded pension system of any U.S. state and is roughly $111 billion in debt.

Rauner said during his State of the State speech Wednesday that Illinois spends billions each year on "a broken patchwork of reactive, expensive and ineffective interventions."

Without providing details, he says his administration is focusing more on prevention and paying providers for "value" rather than volume.

The Republican also says he wants to move more elderly people and people with developmental disabilities who live in institutions into "community care" programs, where they live on their own with assistance.

Rauner's office last year proposed limiting eligibility for some programs to save money during the state budget impasse. He later reversed course.

Gov. Bruce Rauner is repeating his call for changes he says will make Illinois more competitive.

The Republican is delivering his second State of the State speech Wednesday. He says Illinois should be leading the country in economic growth but "we are losing the race for good paying jobs."

Rauner says the key is to pass pro-business legislation that he's been pushing for more than a year. They include changes to workers' compensation and freezing property taxes.

The agenda items are the center of a stalemate over the state budget that's approaching its eighth month.

Democrats want Rauner to agree to a tax increase to balance the budget. Rauner won't agree until Democrats pass some of his priorities.

He says he'll work with Democrats to accomplish some of them this year.

More than 500 people gathered at the Illinois Capitol ahead of Gov. Bruce Rauner's State of the State address to call for an end to the state budget impasse.

The Responsible Budget Coalition's rally was Wednesday morning in the building's first-floor rotunda. Protesters waved signs and yelled "Rauner says cut back! We say fight back!"

A retiree from Chicago Heights said he came from the South Side of Chicago on a bus with about 50 others to ask Illinois leaders to solve the budget crisis. He held a sign that read "Budget Now for Families." Other signs called for a budget for youth, higher education and immigrant services.

Rauner and Democrats who control the state Legislature have been unable to agree on a budget for the fiscal year that started July 1.

Illinois Gov. Bruce Rauner will propose fixing the state's underfunded pension system and eliminating what he says is wasteful bureaucracy in public schools during his State of the State address.

The Republican governor is delivering his second State of the State speech Wednesday with no budget and mounting pressure over the seven-month-old stalemate that's crippling services.

In his speech, Rauner will propose ways to provide more money to classrooms and hold schools "truly accountable for results," according to excerpts provided by his office to The Associated Press.

And he'll repeat earlier calls for fixing the state's massive pension debt, which stands at $111 billion.

He'll also talk about efforts to reduce the state prison population by 25 percent over the next decade by focusing more on rehabilitation rather than imprisonment.

(This posting was last updated 3:33 PM, 1/27/16, to include reaction from labor leaders and legislators.) 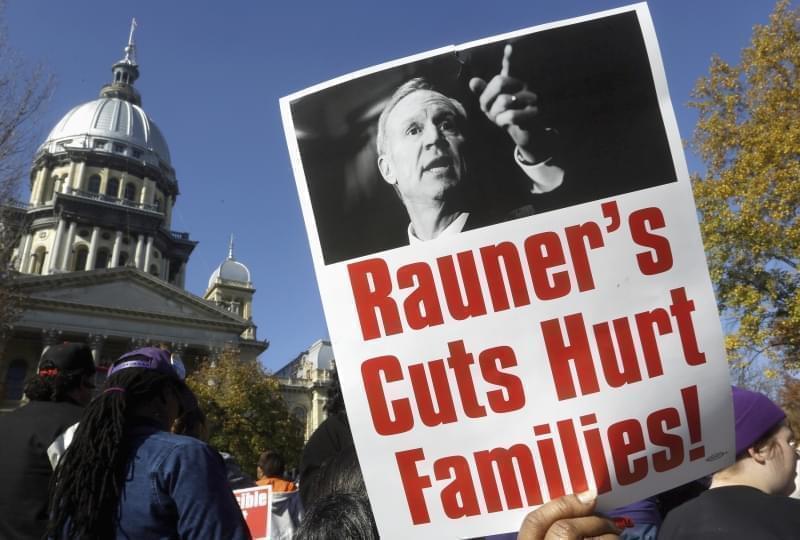