Coleman-Lands tied Maverick Morgan for a team-high 18 points. Tracy Abrams hit all four of his three-pointers, and Aaron Jordan converted 3-of-5 to help Illinois achieve a 57% accuracy rate from the arc. The team's 16 made-threes tied a record set in the Illini’s miraculous March Madness comeback win over Arizona in 2005.

St. Joseph-Ogden graduate Nate Michael scored a game-high 25 for the McKendree Bearcats. Michael is the son of former Illini cager Tom Michael, who was senior associate athletic director at Illinois before taking the top post at Eastern Illinois University.

The younger Michael said the opportunity to return to familiar environs was “like a dream come true.”

“Growing up just down the road from here, (having) season tickets growing up when my dad worked here, and to get to play on the same court as them, and play against them, you know, being on the Big Ten Network makes it a little bit sweeter”, said Michael. “I think this game will help us in the future.”

With all the offensive fireworks, two of the game's most remarkable stats might have gone overlooked. First, Illini leading scorer Malcolm Hill went 1-for-7 from the floor for three points, two days after scoring 40 points in Sunday’s 79-64 win over Northern Kentucky. Coach John Groce applauded Hill for trying to get others involved, and for playing relentless defense.

Groce was even more pleased that his team committed a total of only six turnovers. He attributed the improvement in ball-handling to his employment of a line-up that frequently featured two point guards simultaneously, rotating between Jaylon Tate, Tracy Abrams and Te'Jon Lucas.

We have three really good point guards, and Tate’s playing the best he’s played in his career”, said Groce. “Abrams is the best he’s shot the ball. And then you saw a little bit of  Te’Jon’s talent tonight, in particular with passing and pushing tempo. One of my concerns I kept echoing, coming out of the exhibition games was the turnovers. Putting two point guards out there at times has certainly been helpful when it comes to taking care of the basketball.

For true freshman Lucas, it was the first time he saw major minutes in a college game. He finished the night a perfect 4-of-4 from the floor, for 9 points, with 6 assists and two turnovers.

For McKendree, the game counts as an exhibition, not a loss on the Bearcats season record. For Illinois, the game does count toward a season win total, but doesn't affect the Illini's standing in the Rating Percentage Index (RPI), a key determinant for NCAA postseason play.

This rule anomaly is the chief reason for an uptick in games scheduled between Division I and Division II teams.

Illinois returns to Division I action Friday night, when they host Detroit-Mercy's Titans at 7 pm. 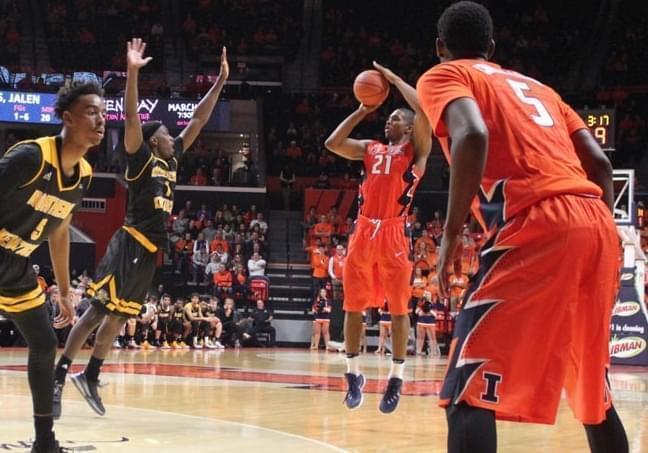