It’s the last Monday in August, and lawmakers have gathered in Springfield for an eleventh-hour vote on education funding, in the hopes of releasing long-awaited money to state schools as academic years are beginning.

But former Senate Republican Leader Christine Radogno is at home, preparing to rush off to O'Hare International Airport on a trip to see her daughter and grandchildren in Arizona.

Radogno, the first female to lead a party caucus in the state legislature, announced June 29 she'd be stepping down from the post she'd held since 2009.

The move came as lawmakers were just days away from entering a third year without a state spending plan, a partisan-driven logjam that Radogno had tried hard, but unsuccessfully, to break in recent months.

So Radogno chose the start of the state's fiscal year to begin her retirement.

“At some point, it's not worth the stress on your physical and mental health when you're not making any progress,” Radogno says. Searching for what she calls a “natural break” in the legislature, she chose July 1, the start of the state's new fiscal year.

“I wasn't sure there was another break coming anytime soon,” she says.

After telling reporters of her decision, a tearful Radogno walked out of the Capitol basement room where press conferences are often held and into the embrace of Democratic state Sen. Melinda Bush of Grayslake.

“I told her, ‘You will be so missed. You have been an incredible leader,’’’ Bush reflected. “I really thought it was important that there was a woman there in leadership. ... I speak for most of us and say we respected the fact that she was willing to come to the table to try to find a middle ground where we could compromise.”

The chamber's two leaders portrayed themselves as the voices of reason in the midst of a battle of ideologies between powerful House Speaker Michael Madigan and Republican Gov. Bruce Rauner, working to push a plan that ultimately, to their frustration, fell apart.

Radogno was first elected to the state Senate in 1996, after defeating incumbent Republican Robert Raica in the primary.

A former LaGrange village trustee and social worker by trade, Radogno got involved in politics as a young mother of three when there was an effort to build a fire station at the end of her street to clear land for a TIF (tax increment financing) district elsewhere.

“Ironically, I was a critic of TIF districts at the time, and we developed some opposition, got local school districts to understand the issue,” she says.

That background — and the following decade of experience on the village board — propelled her toward serving on finance committees when she began her term in the statehouse.

“I came in with a little bit of credibility,” she says. “That said, once you get there, women have to prove themselves, whereas men get a presumption of competence.”

“When I was chair of the appropriations committee she served with me and was a pretty quick study,” Rauschenberger says. “She had some firmly held beliefs and never lost those.” Among them, he says, she was concerned with how disabled people were dealt with in the state’s Medicaid program, something that “was not really a kind of Republican mainstay in the 1990s.”

Radogno, Rauschenberger says, was “effective in helping us negotiate with the Democrats.”

Radogno says she feels she developed a reputation for moderacy in part because of the drawing of her 41st Senate district, which at one time included the affluent suburban communities of Burr Ridge, Hinsdale and LaGrange, while at the same time including more diverse, blue collar communities of Summit and Bridgeview as well as part of the city of Chicago.

“I was really forced to work with both sides,” Radogno says, noting that “one of the problems we have now is districts are (gerrymandered) to be so extreme.”

One early example of that was the state’s mental health parity act, which brought state law in line with federal law by requiring mental health coverage be treated like other physical ailments.

“That was born in part because of my social work background,” she says. “It wasn’t particularly popular with Republicans. At the time, there was a lack of understanding about (the importance of mental health).”

Before Democrats had total control of the governor’s office and the General Assembly, Radogno says she learned the value of trading favors with lawmakers on the other side.

“I was in the majority and Larry Walsh, a state senator from Joliet, needed something for one of his school districts,’’ Radogno says. “I remember thinking (in voting for it), this is money in the bank. It sowed the seeds of really good relations.”

However, when Democrats got total control of the General Assembly in 2003, “it became very different” in terms of a more partisan, vitriolic atmosphere, she says.

Radogno made an unsuccessful bid for treasurer in 2006, which she says in retrospect she was “thrilled I didn’t win.”

“It’s a job that’s much more administrative than policy, and I’ve been very focused on policy,” she says. “But campaigning gave me an opportunity to learn the state and the nuances of different (regions).”

In 2009, Senate Republican Leader Frank Watson, another of Radogno’s mentors, suffered a stroke while out campaigning.

When it became clear he would not recover enough to return to the job, Radogno saw an opportunity.

“I asked him for it, frankly. I thought a suburbanite would be good and a woman would be good (for the role),” she says. “Republicans were getting pushed further and further to the right and I thought I might add a different face to the party.”

She was surprised by her selection because it was not a role she envisioned for herself,  even though she felt she had a lot to offer.

“I’m not sure symbolism by itself matters,” Rauschenberger says. “I think it was good we had a woman. But I think the more significant piece is we had a suburban moderate (as Senate GOP Leader) at a time the GOP was struggling with how the suburbs viewed the Republican party.”

At the leadership table with three strong male personalities, Radogno developed a reputation for her knowledge of the social service budget and the impact of it.

“Chris had a firm understanding of how those programs worked and their importance,”  Rauschenberger says. “She went to the table with those kind of understandings.”

Radogno spent much of her time during the 100th General Assembly working with Cullerton to end the state’s two-year budget impasse, which was a highlight of her tenure.

That effort ultimately fell apart in May, with Democrats accusing Republican Gov. Bruce Rauner of pulling GOP senators’votes off the measure at the last minute.

Radogno says she decided to step down earlier this year, but stayed to keep working on the budget deal dubbed the grand bargain.

“It was my initial hope that my natural break point would be sending the grand bargain over to the House,” she told reporters when she announced her departure.

The efforts by Cullerton and Radogno showed a rare glimmer of bipartisanship in the politically deadlocked state Capitol.

It also displayed a reflective mentality by both Radogno and Cullerton, who was also rumored to be mulling leaving his post.

“When you reach the end of your career, you’re less hard-edged and you're more interested in winding up,” Rauschenberger says. “Maybe that influenced how she saw the last budget.”

In June of 2014, Radogno's middle daughter, Lisa, a 31-year-old aide to U.S. Sen. Mark Kirk, died of a pulmonary embolism weeks after she was hit by a car in a hit-and-run crash in Washington, D.C.

"I know no tomorrows are guaranteed. I learned that the hard way,” Radogno says.  She adds that both she and her husband Nunzio are in good health and of retirement age, and want to spend more time traveling and with their grandchildren.

After she announced her retirement, Madigan told reporters that Radogno was leaving the state Capitol with “a reputation for hard work, honesty, integrity.”

“The genius of the legislative process lies in the ability to compromise, and Chris Radogno understands that,” Madigan said.

Radogno declined to discuss the state's future, or sketch a concrete picture of her own in the years to come.

“I’m just going to take a break right now. I’m just enjoying the time,” she says. “I hope people would say that I was reasonable, serious, and I really took the time to dig into issues and that I was willing to compromise to move the state forward.”

That willingness to compromise “is not necessarily a gender issue but it does seem to be. It’s women who have to deal with divergent voices with kids, their teachers, the PTA or little league. We’re constantly dealing with that.” 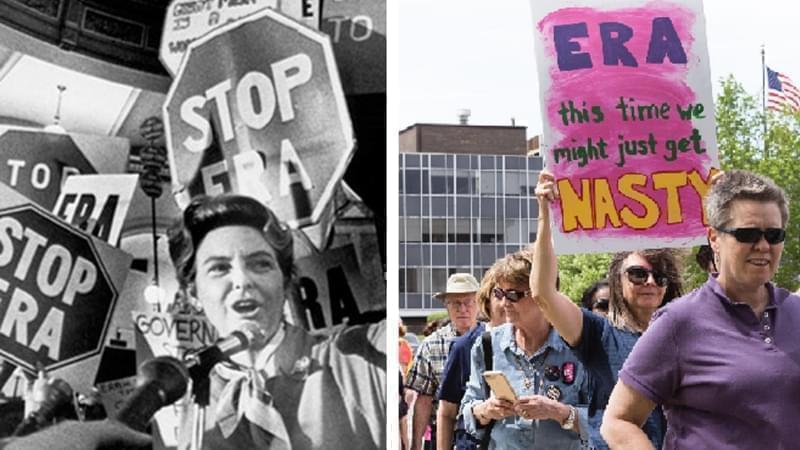