Buying shoes, a new computer or even toilet paper online can be convenient and cheap, but officials in cities across central Illinois say it’s taking a bite out of their budgets. That concern is behind support for state and local sales taxes on online purchases.

It may seem quaint in the age of Amazon, but Mark Peterson wanted to buy a power tool from a store. He says he went to a home improvement store a few times to try to buy it, but was told he’d be better off getting the tool from the store’s website because workers weren’t sure when a shipment would be coming in.

Better than most, Peterson, the manager for the town of Normal, knows that buying online means his town loses out on local sales taxes. He says it's one reason Normal has been seeing revenue flatline or even decline in recent years. Retail taxes have been a reliable and significant piece of the town’s budget, and the trend is concerning.

What’s needed is a change to tax policy to more accurately reflect an economy that is increasingly based online, the city officials say. Allowing state and local governments to collect sales tax on all online purchases would close a loophole and level the playing field with brick-and-mortar stores, the argument goes. But many online sellers worry current proposals would mean onerous collection requirements that could put small sellers out of business.

This comes as the state attempts to lure online shopping behemoth Amazon and its promise of 50,000 jobs  to set up its second headquarters in Illinois with a package of tax incentives.

Meanwhile, city officials are figuring out how to close budget gaps by raising other taxes or fees or cutting services.

Kyle Moore, mayor of Quincy, says the growth in online shopping is affecting his city. It has traditionally been a retail hub, but instead of revenue from retail taxes growing by 2 to 3 percent per year, it has been stagnant. This year, the city is projecting the revenue stream to bring in $9.6 million, almost no growth from last year. And costs continue grow, Moore points out.

Moore says he’s warned the city’s council that difficult decisions about reducing services or raising other sources of revenues lay ahead. One proposal is to hike garbage and recycling fees. While no one enjoys seeing taxes raised, Moore says he worries about increasing fees on residents on a fixed income.

“That's the tough conversation we have to have if we don’t want to reduce services,” he says.

Brad Cole, executive director of the Illinois Municipal League, says those conversations are happening throughout the state. “Over the last decade, we've seen an increase in online sales, which then relates directly to a decrease in sales tax [revenue],” he says. “There is some collection happening, but it's having a significant negative impact on most municipalities.”

Limits to the "Amazon Tax"

With the 2015 “Amazon tax,” Illinois began collecting the 6.25 percent state sales tax on more online purchases from sellers with a warehouse, office or other presence in the state. A percentage of that is distributed among local governments based on population.

But the tax doesn’t cover out-of-state vendors who don’t have a presence selling merchandise online to Illinois residents. Consumers are technically supposed to pay the sales tax on their annual income tax returns, but few do.  And cities that have a local sales tax, unless they’re home to a warehouse or fulfillment center, can’t collect taxes on what their residents buy online.

There isn’t a lot of analysis for loss of sales tax revenue on a city level. The National Conference of State Legislatures estimates uncollected taxes from e-commerce totaled $11.4 billion in 2012. Of that, uncollected revenue in Illinois was around $506.8 million.

Meanwhile, online sales have boomed. E-commerce totaled $394.9 billion in 2016, an increase of 15 percent from the year before, according to the U.S. Department of Commerce. Comparatively, overall retail sales grew 2.9 percent.

After some growth following the Great Recession, sales tax revenue in Peoria declined or remained stagnant in the last five years, according to numbers from the city. The biggest loss was a $566,000 drop in Fiscal Year 2013. It then dipped by $452,000 the following year. Last year Peoria hiked its local sales tax rate by a quarter percent and saw a corresponding boost to revenue.

“The challenge for us is that that's not applied to online sales, which is where we're seeing the growth occurring,” says Peoria City Manager Patrick Urich.

Urich sees the problem as a paradigm shift that Illinois is not equipped to handle.  “The reality is that Illinois has not kept pace with the changing way that the consumer is purchasing goods and services,” he says. “We still have taxing systems set up assuming that we have an economy based on goods and it was goods that were purchased in your community. And what we're seeing today is that we're more of a service-based economy, and we don’t tax services in Illinois. And then we're also an economy that's now moving more towards online sales.”

There could be other factors contributing to stagnant or declining revenue. In Normal, Peterson says the area’s major employer, State Farm, has moved jobs to other cities in the last couple years.

Springfield has felt the effects of the state budget and union contract impasse, and had several big-box stores close, arguably another casualty of booming e-commerce, says Bill McCarty, director of the city’s Office of Budget and Management.

The capital city experienced local sales taxes decline by $1.3 million last fiscal year. And it’s seeing another decline this year. McCarty says that’s exacerbated by the state imposing a fee to collect local sales taxes on behalf of cities. The fee was meant to help the state balance its budget passed in July, according to budget negotiators at the time.

McCarty says he hopes the federal government will change the rules so states and cities can collect taxes from online purchases. “Communities, all communities, would share in the taxes generated from online sales. Right now, Springfield doesn’t get anything.”

While officials look for a solution to the problem of dwindling tax revenue, online sellers are attempting to navigate a tax code complicated by changes in the e-commerce industry, says Eddie Levine. Levine is the president and a co-founder of Wholesale Breakthrough, based in Wauconda, which offers consulting to new and growing online businesses. “The tax code and the tax laws as they are now, they weren’t designed for what’s going on in the marketplace,” he says. “That’s the problem.”

Even in the last five years, the business of selling online has changed, he says. More people are using marketplaces, such as Amazon or eBay, that store a business’ inventory in warehouses, use their online platform to sell the goods and then ship them to customers.

Amazon’s rapid expansion of dozens of fulfillment centers throughout the country — there are now five in Illinois — has at once enabled vendors selling online to promise faster shipping and complicated the question of sales tax collection, Levine argues.

Many states have laws similar to Illinois’ “Amazon tax,” requiring online sellers with a presence, or “nexus,” in the state to collect sales tax in that state. The debate Levine hears among online vendors is about whether they have nexus in a state where their inventory is stored.

“A lot of sellers will say that it does not; a lot of sellers will tell say it does,” Levine says. “No matter what side of the coin you fall on, there hasn’t been clear guidance from acting authorities or federal government on what is right and what is wrong.”

Out-of-state retailers with inventory in Illinois warehouses do have to collect state sales tax, according to an Illinois Department of Revenue spokesman. The issue was front-and-center in 2014 when the state legislature approved the Amazon tax after the Illinois Supreme Court struck down a previous, more far-reaching tax on online retailers.

The nexus requirement presents challenges for governments, too, says Lisa Soronen, executive director of the State and Local Legal Center. “The problem is from a state and local government perspective, whatever term is used, whatever definition [for physical presence] is issued is still going to exclude a whole lot of vendors,” she says.

The South Dakota state government passed a law requiring tax collection from all out-of-state vendors for online purchases. Wayfair Inc., Overstock.com Inc., and Newegg Inc. challenged it, and South Dakota’s Supreme Court sided with the online companies in September, upholding the Quill precedent and setting up a possible appeal to the U.S. Supreme Court.

In a previous court decision dealing with similar questions, Justice Anthony Kennedy commented that the court should revisit the Quill decision. Soronen says the South Dakota case is an answer to that. “The idea behind all this litigation is to get rid of physical presence test all together,” Soronen says. What could replace it could be up to the nine justices, she says.

That still leaves room for Congress to act, which it has attempted to do. A version of a current proposal to allow states and local governments to collect sales tax on online purchases made from all out-of-state vendors, the MFA (Marketplace Fairness Act), passed the U. S. Senate in 2013. It failed to get a vote in the House of Representatives.

Some conservatives criticized the effort. “At a time when wasteful government spending is strangling federal and state budgets, most Americans are looking for legislators to cut costs, not raise revenue,” wrote then Americans for Prosperity Vice President Brent Gardner in a 2015 letter to Wyoming U.S. Sen. Mike Enzi, a sponsor of the bill. “The MFA is attempting to solve a tax collection problem but in turn will cause far more serious issues to consumers and small businesses.”

Cole, with the Illinois Municipal League, is tracking both legislative and judicial efforts to change laws on collection. “We're supporting any type of activity that would level the playing field between brick-and-mortar, community businesses and online retailers, and that would allow the municipalities the flexibility to collect the taxes that are already owed to them,” he says. “These are not new taxes. These are taxes that are already owed, already established. It's just applying them properly to those remote online purchases.”

Meanwhile, many online sellers worry a federal policy would force them to deal with a complicated web of tax laws or purchase expensive software to navigate them. Jennifer Dunn is with TaxJar, a service that assists online vendors with filing sales tax returns. She argues the online vendors she works with want to do the right thing when it comes to taxes. “They understand that sales tax pays for schools and roads and ambulances and things like that,” she says. “They just also can't be putting themselves out of business with complying with these really strict and multifaceted sales tax rules.”

What companies need is clarity of what to collect and how, Levine says. He hopes whatever solution results will simplify the process. 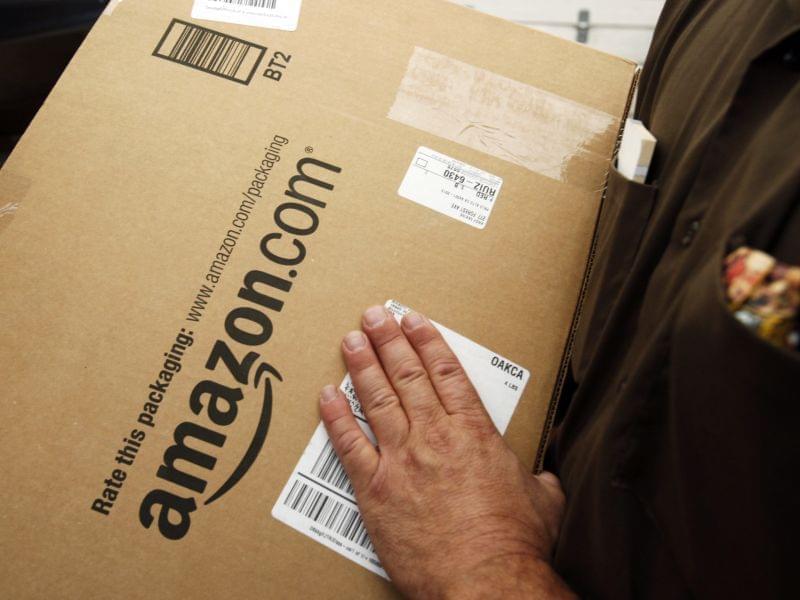