With just more than a week before the end of the spring legislative session, there are many issues lawmakers have yet to settle. For Illinois Issues, NPR Illinois reporters Brian Mackey, Dusty Rhodes, Jaclyn Driscoll, Mary Hansen, and Daisy Contreras take a closer look.

When Gov. J.B. Pritzker introduced his freshman budget this winter, he proposed a range of new or increased taxes. It was intended to let Illinois government hobble through next year’s budget on its way to a graduated income tax.

The ideas included higher cigarette taxes, a new fee on plastic shopping bags, an assessment on the managed care organizations that participate in the state’s Medicaid program, and legalizing recreational marijuana and sports gambling. He also called for shorting the state’s required pension contribution by hundreds of millions of dollars.

But those ideas are speculative and controversial, so when members of the Illinois House of Representatives began putting together a budget, they counted on none of that money, and instead planned for deep cuts across state government.

Then came the April surprise: $1.5 billion in unexpected tax payments, with projections for an additional $800 million into next year.

House Majority Leader Greg Harris, who is also the House Democrats’ lead budget negotiator, says all the proposed taxes are still in the mix.

"They're all being talked about,” he said. “What makes it into the final package or not? I don't know. The bag tax does not seem to be faring very well -- not getting a lot of support for that. But other things -- this is the time of year where there's a lot of negotiating going on and things will come in and go out.”

After weeks of Republican complaints that they were being shut out of the process, this week House budget negotiators from both parties met again.

“Last night in the house more working groups on Elementary and Secondary Education met, Higher Ed met and Human Services met — Republicans and Democrats — to make a second round through the budget to account for the money that came in in April that we had not been expecting,” Harris said.

He said there are parallel meetings between the House and Senate leadership, and others that involve the governor’s office.

“Things come and go out of each proposal and you've got to keep a scorecard,” Harris said.

Among the things that could come in and stay in is the assessment on the Medicaid managed care organizations. Republican Rep. Norine Hammond, from Macomb, says her party can support that idea, as well as legalizing sports betting.

Nevertheless, Hammond remains what one might call guardedly optimistic.

“I would like to think that we're headed towards a bipartisan budget,” Hammond said. “But as you well know after all these years, the devil’s in the details.”

Harris, the Democratic majority leader, says he’s “really optimistic” about the chances of a bipartisan budget. Of course with supermajorities in both the House and Senate, Democrats ought to have more than enough votes to go it alone.

“Eventually we’ll squeeze the jello enough, it will form into a mold, and we’ll have a path forward,” he said.

Illinois’ proposal to legalize recreational cannabis for adult use is still being negotiated and some changes are expected to be unveiled soon.

One of the most contentious issues is the expungement of criminal records for low-level marijuana crimes. As the proposal is written now those 21 years and older would be able to possess up to 30 grams of cannabis. But, the measure would offer automatic expungement for possession of up to 500 grams. State Sens. Dale Righter (R-Mattoon) and Jason Barickman (R-Bloomington) have said they disagree with that portion because it expunges records beyond possession limits stated in the proposal.

State Sen. Heather Steans (D-Chicago), a lead sponsor, said dispensaries will be able to possess much more than 500 grams, and the idea is to allow those who engaged in illegal dealing of small amounts of cannabis access to the legal marketplace.

House Minority Leader Jim Durkin (R-Western Springs) has said he believes the expungement portion is only included as “an enticement” to get “certain caucuses” to support the legislation. On WILL’s radio show, The 21st, Durkin said: “People who deal with drugs and people who have destroyed neighborhoods, should be given the opportunity to have this expungement … for the purposes of putting them back into the legal trade, doesn’t make any sense to me. It’s not right.”

The Legislative Black Caucus has openly advocated for social equity and criminal justice reforms to be included, but Gov. J.B. Pritzker has also said this was one of his primary reasons for legalization.

“The laws have been unequally prosecuted against people of color and that’s one of the reasons why, as we have a cannabis bill put forward, it was very important to have expungement as part of it,” said Pritzker. “Important for us to try to reverse the damage that’s been done by the war on drugs to communities of color.”

The measure also allows adults to grow up to five plants of cannabis at home, so long as it is secured in a room away from children and is not in plain sight. But, in a Senate committee last week, Deputy Gov. Christian Mitchell said he expected that portion to “change substantially.”

One idea is to only allow medical marijuana card holders to be able to grow plants at home. Law enforcement is still opposed to that idea. In a press release, the Illinois Association of the Chiefs of Police said there would be no good way to check for violations, such as the plant limit or if it is being grown in a secure area. They also said “cannabis would be much more accessible to underaged (sic) people” if this is allowed.

Teacher licensure is still one of the main topics on the education beat, because it plays so directly into the state’s teacher shortage. There’s a few bills that tackle that issue from different directions. Not surprisingly, a couple of these bills are sponsored by former school teachers — state Rep. Sue Scherer (D-Decatur) in the House, and state Sen. Andy Manar (D-Bunker Hill) in the Senate.

Both bills would remove the controversial “basic skills test” requirement that has been amped up over the years and now prevents many potential teachers from entering the profession. Scherer’s bill would put the requirement on hold for six years to give the Illinois State Board of Education time to reassess the situation; it has passed both chambers with a veto-proof majority.

Manar’s bill would remove the requirement completely. But his bill has two other provisions: One would allow student teachers to be paid; the other would have removed a 2018 provision limiting teachers’ pre-pension pay raises to 3 percent instead of 6 percent. The bill passed the Senate, but the pension boost got deleted in a House amendment.

On Wednesday, the Illinois Education Association — the state’s largest teachers union — came to the capitol to deliver petitions asking for the 3 percent provision to be repealed.

For months, mayors, county highway engineers, hospital officials, educators and more have been telling lawmakers just how badly they need an infusion of cash to fix deteriorating roads and buildings. The numbers are staggering – billions for highway maintenance, billions for facilities on college campuses and millions more for improvements to hospitals and daycares.

Gov. J.B. Pritzker announced his $41.5 billion plan, dubbed Rebuild Illinois, last week. The state last had a capital plan in 2009, the $31 billion Illinois Jobs Now.  The bulk of the money will go to roads, bridges and rail projects. There is money for higher education, state facilities and schools, as well as hospitals and community groups.

To fund it, Illinoisans would pay more for gas and vehicle registration. Taxes would increase on electric vehicles and alcohol, and there’d be new fees on streaming services and parking garages. Pritzker said Wednesday it’s important for those sources of revenue to be stable.

“[It’s] very important also that we have enough of a capital bill here to meet the significant life safety needs for our infrastructure, and then on top of that to make sure we’re advancing the economic interests of the state,” he said.

Illinois representatives and senators have been discussing plans as well. The proposals all include increasing the gas tax, though the exact rates vary and are still under negotiation. The current per gallon tax is 19 cents, which hasn’t changed since 1990. Drivers also pay a sales tax on gas.

State Rep. Margo McDermed, a Will County Republican, said she wouldn’t vote to double the gas tax, but could support a smaller increase.

She said she’s never voted to increase tax since she took office in 2005. “However, folks in my district have come to me repeatedly and said one of the biggest challenges they face is I-80,” she said. “And because of that, I have to step forward and show some leadership in that area."

Lawmakers and stakeholders are still talking about what will be included in the final proposal to legalize sports gambling.

So far, several ideas have been floated around, most recently one that would award seven brick and mortar licenses and three online licenses. This would make it possible for riverboat casinos, video gaming terminal operators and horse tracks to take part in the market. Representatives from all three industries have been vocal about wanting a stake in a legalized framework to potentially revitalize their industries. State Rep. Michael Zalewski (D- Riverside) is spearheading negotiations.

Still contentious is if the tax rate at which wagers are taxed is too high (a current plan puts this at 25%), if professional sports leagues should get a royalty fee, and how much licenses fees should cost. One of the latest proposals would give professional teams a 0.2% royalty on certain bets. Lawmakers involved in negotiation have said all of the proposals are fluid, and taxes and fees could be lower in a final plan. Still, Gov. J.B. Pritzker is counting on $200 million from licensing fees alone that would go toward the budget – meaning fees would still be in the millions.

Gambling experts who have watched as several other states have also legalized sports betting in the last year say Illinois lawmakers can learn a lot from what others have done — especially New Jersey, where lawmakers placed  an 8.5 % tax rate on brick and mortar wagers and a 13% tax rate on online wagers. In the Midwest, Iowa and Indiana have also recently legalized sports wagering, with tax rates and fees much lower than what Illinois’ proposal has now.

Experts say the key is to keep bettors away from the black market and have good consumer protections in place.

A final plan could include casino expansion and other gambling issues that have stalled in previous general assemblies. For years now, several cities across the state have pushed for an opportunity to build a casino in their towns, some arguing that having one would allow them to tap into much-needed revenue. Now, the argument is that they, too, could tap into whatever sports gambling can offer. 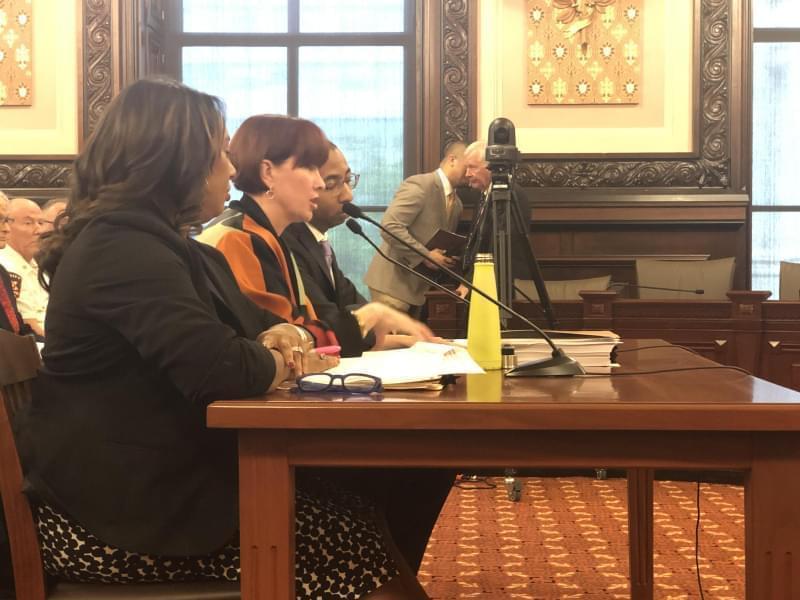