Illinois farmers grow a lot of corn and soybeans.  But the state leads the nation when it comes to growing pumpkins. Despite unusually heavy rains and dry, hot days during the growing season, it’s turning out to be a good year for the crop.

Mohammad Babadoost, a plant pathologist with the University of Illinois at Urbana-Champaign, said the number of pumpkins grown for both eating and decoration doesn’t seem to be slowing down. “Every year we grow more than 20,000 acres of pumpkins," he said. "Some years we reach 26,000 acres. And this is almost as three times as large as any other state that grows pumpkins in the nation."

Dale Jefferies grows ornamental pumpkins and other produce in northern Sangamon County. The family business, Jefferies Orchard, has been around since the 1940s.  After taking over, Jefferies said he has witnessed years where crops haven't fared well. But over the last few years, he describes an average yield of quality ornamental pumpkins.

He said the weather conditions didn't affect his crop this year either.  “Earlier in the summer we were in a dry pocket and we missed a lot of the rains that everyone else got," Jefferies said. "And that affected the pumpkins. But the fall rains were just enough to get them growing, and we ended up with an average yield, an average crop.”

Pumpkin growers like Jefferies must always monitor their crops for disease, Babadoost said. Pathogens from a rotting pumpkin could affect a healthy crop. Babadoost encourages pumpkin patch goers to wash their hands after handling a rotting pumpkin to avoid cross-contamination.

Babadoost said the only issue some crops experienced this year was pumpkin sunburn after several matured earlier than usual. Many growers removed the pumpkins from the vines, which led to rotting after sun and water exposure.

"If pumpkins ripen faster and very early, and we have very direct sunshine, we can keep the pumpkins on the vine and cut them as needed," he said.

Babadoost said the final numbers for canned pumpkin production will be available late in the year.

A Good Year for Pumpkins 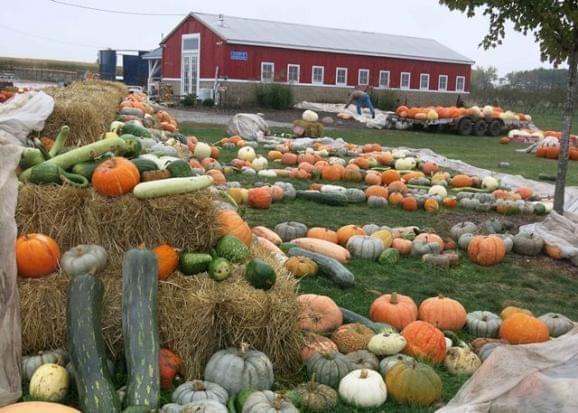