This Thanksgiving, hungry families all over the country will finish off their holiday meal with a little slice of the Midwest.

That’s because the vast majority of all pumpkin that comes from a can and winds up in a pie got its start on a vine in Illinois.

Pumpkin patches are popular destinations for families seeking fall fun, and you’ll find roadside farm stands all over the country. But this is big business in Illinois, where farmers feed canning factories hungry for a special kind of pumpkin that looks nothing like those you see on Halloween.

A huge producer of corn and soybeans, Illinois also harvested more than 16,000 total acres of pumpkins in 2012, according to the USDA. That’s more than double the next biggest pumpkin grower, the state of Ohio.

Morton, Ill., is a major hub of pumpkin production. The small farming community near Peoria is home to Libby’s brand canned pumpkin, which should be familiar to shoppers who’ve glanced down their grocery store’s canned foods or baking aisle. Thirty miles to the north, in Princeville, Ill., Seneca Foods processes generic pumpkin for grocery stores’ private labels. That’s why locals call Morton the “Pumpkin Capital of the World.”

Why is Illinois the pumpkin state? Mostly because Libby’s brand is the canned pumpkin king. The company is owned by Nestlé and says 8 of every ten cans of pumpkin sold last year was Libby’s.

So it comes down to fertile pumpkin soil -- and gravity.

“Pumpkins are heavy and, of course, expensive to transport.” said Roz O’Hearn, with Nestlé’s prepared foods division. “We have tested growing pumpkin in other areas, and we just find the Morton pumpkin just to be perfect for our purposes.” 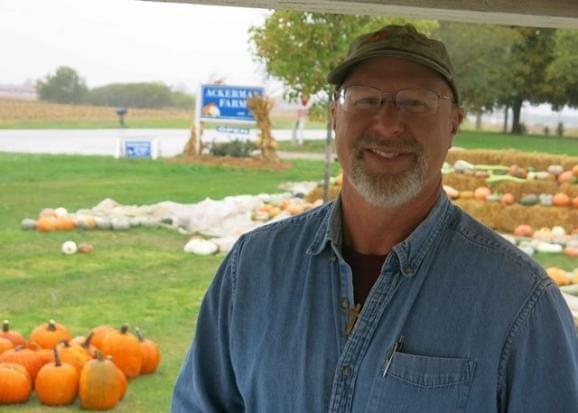 Area growers like John Ackerman have for years cashed in big time on the nation’s appetite for holiday sweets.

“I understand that most years, there’s about 5,000 acres in central Illinois devoted to Libby’s pumpkins,” Ackerman said.

The arrangement canning companies offer growers in the area provides them an economic safety net unique to pumpkin growing around the country. In 2009, when John Ackerman lost 30 acres of Nestlé pumpkins due to heavy rain during harvest time, he was paid for his estimated yield and got to use the ruined crop as fertilizer. That year Nestlé announced a shortage of pumpkin, which made headlines and triggered a run on supermarkets around the nation.

With Nestlé in his backyard, Ackerman can afford to take risks on what is known as a notoriously fickle crop.

“To be honest, any vining crop, particularly pumpkins, are a fickle crop,” Ackerman said. “If they get rain at the wrong time it can be disastrous. They are more susceptible to fungus and diseases.”

The variety Ackerman grows for Libby’s, called the Libby’s Select, is closer to a butternut squash than it is a jack o’ lantern. It isn’t harvested for its looks. Its off-white skin is peeled away and the thick orange flesh inside is cut out, steamed and strained before it is put in a can at the local processing plant.

“We tell our schoolchildren it may not be as pretty as some of the other pumpkins, but it makes a great pumpkin pie,” Ackerman says of the Libby’s Select.

Ackerman says the company has been “good to him” over the years, which has allowed him to expand his pumpkin business. His backyard now has 160 varieties of pumpkins, squash and gourds from around the world.

“I’ve got one that looks like a giant pickle and weighs 70 pounds. It’s the Long of Naples, it’s a good eating one,” Ackerman says. “There’s even one that’s beige with bright orange stripes that’s called ‘One Too Many’, because that’s what your eyeball’s supposed to look like after you’ve had one too many.”

While some cooks may turn their noses up at canned pumpkin, the market for pumpkin products is growing. Soon, it may not just be the dirty little pumpkin pie secret of those pressed for time. Perhaps you’ll find pumpkin ravioli on Valentine’s Day, pumpkin salsa for Cinco de Mayo, or pumpkin dip during a summer barbeque. And it’s likely that pumpkin pulp started on a vine in central Illinois.