Illinois lawmakers return to Springfield on Tuesday after two weeks away. The top issue this spring remains whether to let the temporary tax increase drop at the end of the year as scheduled, or vote to keep the income tax rate at five percent.

Senate President John Cullerton said the Senate will vote on the tax question if and only if it first passes the House.

"We feel like the House should take this up first. We have more Democrats here who are supportive of the measure," Cullerton said.

House Speaker Michael Madigan recently said he doesn't yet have the votes to pass Gov. Pat Quinn's plan to keep the higher rate.

Democrats hold supermajorities in both chambers of the General Assembly, but the partisan ratio is most lopsided in the Senate, where there are 40 Democrats and 19 Republicans. That's more than enough votes to pass a tax hike without any GOP support, but Cullerton said that is a difficult task of Democrats, with an election ahead in November.

"If the House doesn't decide to extend the income tax, then we'll have to work on a very Draconian, Doomsday type budget," Cullerton said. "But people then might fully appreciate what tough choices we’ve been making down here, and how difficult our choices have been."

Gov. Pat Quinn and other Democrats say if the tax rate is allowed to drop, there would have to be massive cuts across state government.

For example, Secretary of State Jesse White said his office would have to cut nearly $39 million under the "not recommended" budget.

White said that means 25 drivers license facilities would be closed and at least 200 people laid off. He also said the state would stop mailing reminders for people to renew their drivers licenses and license plates.

"If we are forced to stop sending notices out, I am afraid that many well-intentioned people will simply forget to renew their vehicle registration or drivers license in a timely manner," White said.

The threatened cuts include the entire state Capitol Police force, which was established about a decade ago, after a deranged man shot and killed an unarmed security officer. The shooting led to the installation of metal detectors and x-ray machines, and hiring sworn, armed law enforcement personnel. 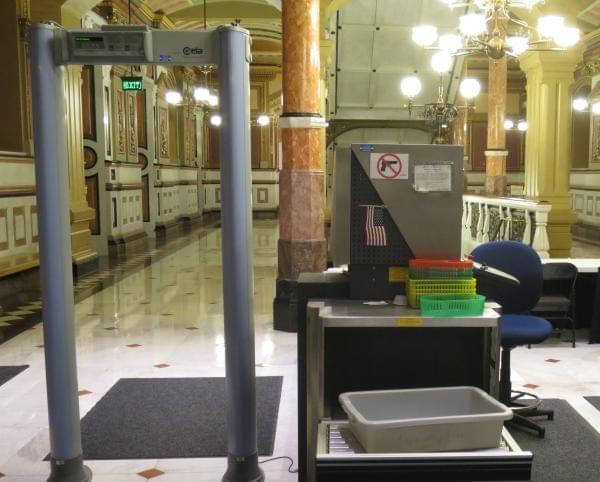 Metal detectors and X-ray machines were installed in the Illinois Capitol after a gunman killed an unarmed security guard in 2004. (Brian Mackey/IPR)

White said unless the legislature makes the temporary tax increase permanent, the entire force will be eliminated — leaving just the unarmed guards.

"We just believe if we have to revert back to the days when this gentleman was killed, that it may not be in the best interests of the members of the Illinois General Assembly, or the people at large," he said.

Republicans say Democrats are exaggerating the financial hole that would be created by letting the tax increase expire, but they have yet to offer their own comprehensive plan for funding -- or cutting -- state government.