The Illinois Department of Natural Resources says it has reached an agreement with the governor's office to reopen the state museum by charging admission and closing two branches to save money.

The announcement Monday comes three days after Gov. Bruce Rauner rejected legislation to reopen the museum. Rauner used his veto power to tell lawmakers the museum and its satellite locations can reopen only if it gets its own funding through admission fees and donations.

IDNR says lawmakers must grant the authority to charge entry fees. The department says the locations slated for closing are the Chicago and Rend Lake branches.

Republican lawmakers say an admissions fee, private funding and keeping satellite locations closed will save the state about $1 million a year.

Senator Andy Manar (D-Bunker Hill) sponsored the vetoed bill and says the governor could have started charging a fee for visitors months ago.  Although he says he wasn't invited to the announcement by IDNR, Manar still wants to find a way to re-open the museum.

"I remain committed to trying to find a path forward to solve the problem," he said.

Rep. Tim Butler (R-Springfield) says charging a five dollar admission fee to visitors is reasonable compared with other museums in Illinois and in other states.

"I think that the community really spoke loudly in that this is a gem for our community and now, moving forward, we have a real opportunity for the community to join us in our efforts to make this museum a better place than it has been in the past, in all honesty," he said.  "And I look forward to that."

Rauner closed the museum locations in October because the state doesn't have a budget. The state spends $6 million annually on the Springfield museum and its four satellite sites. 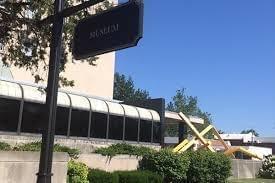