In Illinois, A Governor’s Luck Gets Tested Again

Illinois has remained in lousy shape throughout Quinn's five years in office.

The state's jobless rate is the worst in the Midwest and among the highest in the country. Quinn pushed through a sizable tax increase early in his term, yet Illinois's finances remain among the shakiest in the nation, with its overall budget gap continuing to increase.

"We were one of only two states in the entire country where the unemployment rate got worse last year," says Andrew Welhouse, communications director for the state Republican Party. "Illinois is getting worse, as all of our neighbors are getting better."

For all these reasons, Quinn's approval ratings are underwater and polls indicate he trails Bruce Rauner, a multimillionaire venture capitalist expected to win Tuesday's Republican primary.

Yet few people in Illinois are ready to rule out Quinn, who took the reins in 2009, after fellow Democrat Rod Blagojevich was impeached for trying to sell President Obama's Senate seat to the highest bidder.

Last fall, Hillary Clinton joked that Quinn belonged in the Guinness Book of World Records as the "luckiest politician" in the world — an acknowledgment of the governor's good fortune in avoiding a tough primary election fight.

"People have written Mr. Quinn's epitaph too early too many times before," says Gregg Durham, a pollster with We Ask America, a firm based in Springfield. "He always seems to bounce back." 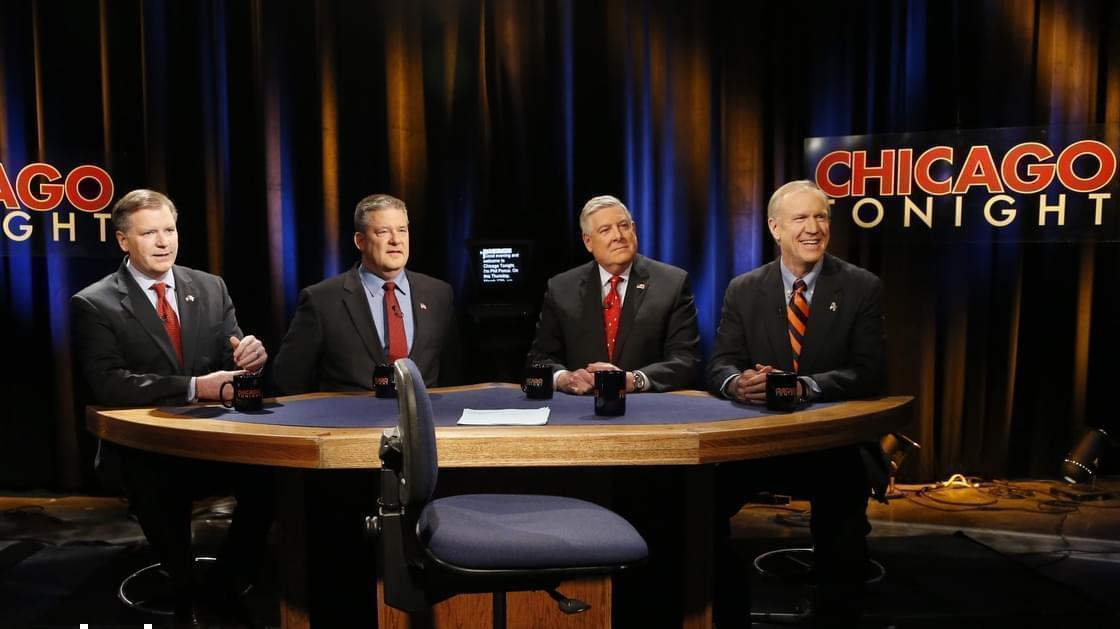 Running Against A Newcomer

Democrats are eager to paint Rauner as the second coming of Mitt Romney, only worse — an arrogant rich guy seeking to buy his way into top political office.

"There is hardly a more flawed candidate running for office in the country today," claims Quinn consultant Mark Mellman. "He's done Romney-like dismemberment of companies to his own benefit."

Rauner handed the Quinn campaign a gift recently when he said the minimum wage should be reduced by a dollar an hour. Rauner quickly backpedaled, saying he would favor a wage increase under certain circumstances.

But Democrats intend to pounce on Rauner on wage and equality issues, as well as the management of his own companies.

"He's got to establish that he's more than just a rich guy who wants to buy his way into the governorship, and that's how Democrats will portray him," says John Mark Hansen, a political scientist at the University of Chicago.

Rauner has spent at least $6 million of his own money on the race, raising even more from other donors. He has vastly outspent his three rivals, including state Sen. Bill Brady and state Treasurer Dan Rutherford, for the Republican nomination.

Rauner's leading opponent, state Sen. Kirk Dillard, lost the nomination by less than 200 votes four years ago. It appears he will come up short again.

Dillard had received backing and financial support from a number of public-employee unions. But they pulled their money out of the race last week, a clear indication they thought he couldn't catch Rauner.

The unions are unhappy with Quinn for having pushed through a pension bill last year that raises retirement ages and reduces cost of living increases. But they prefer him to Rauner, who talks openly of his disdain for "union bosses."

"Rauner scares them so much that they're swallowing hard and realizing that Pat Quinn is a better deal for them than Rauner would be," says David Yepsen, who directs a public policy institute at Southern Illinois University.

Quinn has some work to do in rallying Democrats to his cause. Illinois is a blue state — no Republican has been elected governor since 1998 — but like Democrats across the country, he has to worry about a midterm fall-off in turnout.

Four years ago, Quinn's margin of victory was less than 1 percentage point. He lost all but four of the state's 102 counties, racking up his winning margin in the populous Chicago area.

What's more, a recent poll indicated that a third of Illinois Democrats aren't certain they will vote for him this fall.

"That's a devastating number," says Durham, who conducted the poll.

Rauner, meanwhile, has proven himself to be a disciplined candidate. He has essentially no public record, but with the exception of his minimum wage comment has stayed strictly on message and pounded his GOP opponents with well-timed attacks.

"Rauner has shown two things that most of the rich guys who run haven't, which is kind of a killer instinct in terms of his campaign approach and great opposition research," says Dennis Culloton, a public relations consultant and former GOP gubernatorial aide.

Rauner will have to mend fences himself, with a majority of Republican primary voters likely to vote against him. They haven't all warmed to his moderate-to-liberal stances on social issues such as abortion and same-sex marriage.

Luck Is Residue Of Work

Quinn, meanwhile, managed to avoid a bruising primary challenge that he might well have lost. And his pension law, while not a panacea, gives him a powerful argument about being able to push through difficult changes in a legislature that will remain dominated by Democrats.

Quinn sought to cut off pay for legislators until they passed the bill, which angered them but played well with the public.

"He's begun to solve the pension crisis that has bedeviled the state," says Mellman, Quinn's campaign consultant. "He had to knock some heads together to do it, but he's starting to bring the state back."

People in Illinois know that, when it comes to the campaign, Quinn will not be outworked — and he's a master at attracting free media.

"It's the toughest race Quinn will ever see," Culloton says. "By the same token, this is a guy who doesn't need millions of dollars to run a campaign. He needs a push mower, a little bit of protein and a flashlight, and he's good to go. This is a guy who can live off the land."