Gov. Bruce Rauner has launched a website to show that most school districts stand to gain more state funding under his plan than under the Democrats' plan. How he calculated those numbers is a question reporters have asked repeatedly. We turned to the state board of education for answers.

When lawmakers wants to see how a school funding bill would work out, they ask the Illinois State Board of Education to build a simulation or model.

To expedite matters, the board's legislative liaison, Amanda Elliott, sent an email to several staffers in both parties with a detailed plug-and-play diagram attached, showing them how to build their own school funding simulations using models already published on isbe.net.

Step one: Specify the dollar amount to input through the new formula. This diagram negated any need for lawmakers (or the governor) to share how they calculated that amount. The dollar amounts Rauner promises on his website are more generous than SB1 to every school district except Chicago Public Schools.

A footnote on his website indicates he would pick up Chicago pension payments but eliminate a CPS block grant. Redistributing that block grant would account for a significant portion of the increased funding Rauner promises other districts. ​

NPR Illinois obtained the email through the Freedom of Information Act.  Below are the instructions sent to staffers by Elliott. 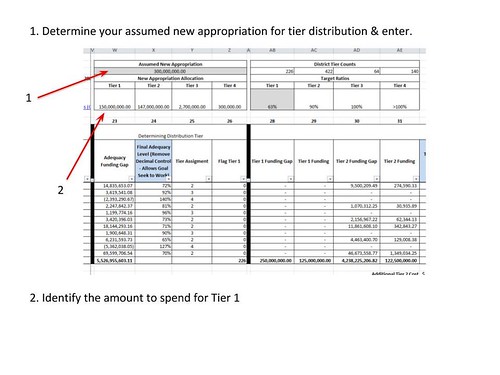