A state labor board has denied a request by Republican Gov. Bruce Rauner's administration to bypass an administrative judge and expedite ruling on whether negotiations have stalled with Illinois' largest public workers' union.

The decision means the contract negotiations case with the American Federation of State, County and Municipal Employees will proceed as it has for months, with an administrative law judge.

She'll give her recommendation to the board, possibly by November.  Illinois Labor Relations Board members, appointed by the governor, voted unanimously Thursday. They contend intervening early wouldn't save time or money as Rauner's office argued.

Material from the judge's hearings is voluminous with over 5,000 pages of transcripts. The board's attorney says it'll take members time to study. Also, there's little legal precedent for bypassing an administrative judge.

AFSCME members don't *want* to strike, says spokesman Anders Lindall. But the union is laying the groundwork, just in case.

"We've got nearly 80 local unions of state employees and so they are having their conversations with their members, on the ground, where they live and work, to give them all the information and answer all their questions," Lindall said.

Lindall says Governor Bruce Rauner is trying to unilaterally impose demands -- like pay cuts, and higher health insurance premiums -- on the thousands of state employees who are members of AFSCME.  The Rauner administration says the two sides are so far apart on negotiating a new contract, there's no point to further talks.

Rauner released a statement after the labor board's ruling Thursday.

“While we are disappointed in the result, we voluntarily agreed to these impasse proceedings with AFSCME and will continue to respect and follow the Labor Board’s decisions throughout," he said. "This will hopefully also put an end to the reprehensible attacks that AFSCME has made against the independence and integrity of the administrative law judge and the Board.”

The governor says union members would accept his offer if their leadership would give them the chance.

AFSCME has never gone on strike in the roughly 40 years Illinois has had collective bargaining. The two sides have been at odds since Rauner was a candidate, and criticized "government union bosses." 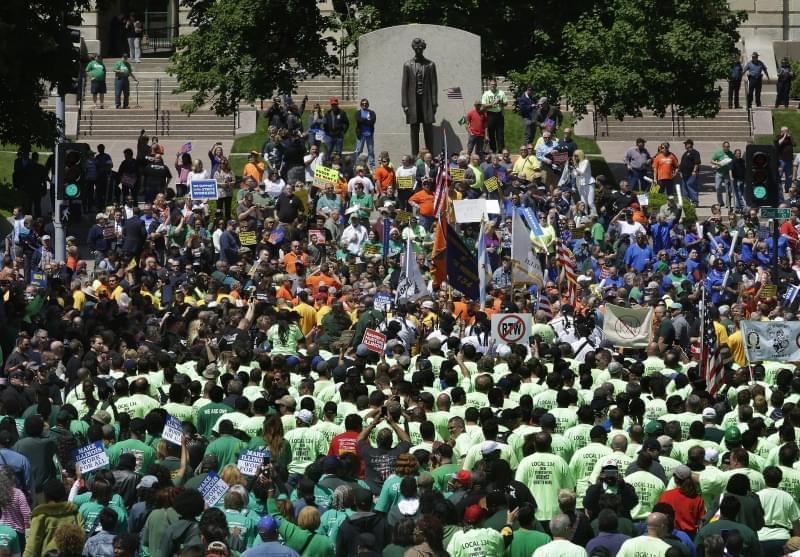