Driver’s license services will return to Champaign this summer, about six months after the previous location was forced to close.

He said it’s about 2,000 square feet larger than the former site on Bradley Avenue (6,000 total), with additional parking space.

"That was an issue that we always had, and we know the customers had some issues with too, at the previous facility is the parking lot just wasn’t big enough," he said.  "We do approximately 800 applicants at day at the old Champaign facility, and we expect we’ll do at least that many at this new facility.”

Customers and employees at the previous location complained of headaches and nausea.  Tests showed high levels of carbon dioxide.

Since that time, motorists have had to visit alternate sites in towns like Rantoul, Monticello, and Tilton. 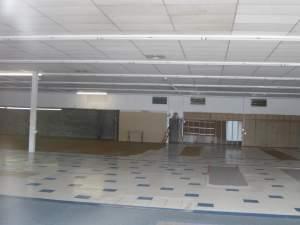 (Pictured:  a look inside the windows of the future Driver's Services Facility in Champaign on Round Barn Road.)

Haupt said the Round Barn location will need a few standard modifications, including routine plumbing, electrical work, and new flooring before opening.

In a press release, Secretary of State Jesse White said his office is working closely with the landlord who, as part of the lease agreement, is in charge of those modifications.