Gov. Bruce Rauner is ratcheting up his battle with organized labor. In a surprise move, today he issued an executive order that allows government workers to stop paying union dues.

Since taking office, Rauner talked a lot about his belief that unions’ contributions to political campaigns are a "corrupt bargain." 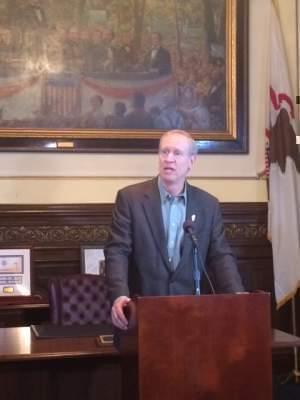 The Republican governor says forcing state employees to pay union dues is a “critical cog” in that bargain, and it’s crushing taxpayers.

"A major reason why government unions are so dominant in Illinois is the decision to institute card check – forced unionizing – in state government, which had the effect of bullying and intimidating many state employees into joining the union," he said at a press conference in Springfield.

Illinois, in fact, does not force workers to join unions; workers who benefit from union-negotiated contracts, however, can be made to help pay for that. Rauner says there are 6,500 workers in this position. He says he’s preparing to take the issue to the U.S. Supreme Court. Rauner has already filed a case in the federal court, in Illinois' Northern District.

In a statement, the director of Illinois’ largest public employees union, AFSCME's Roberta Lynch, calls Rauner's order a "blatantly illegal use of power," and vows to work to overturn it. "Perhaps as a private equity CEO Rauner was accustomed to ignoring legal and ethical standards, but Illinois is still a democracy and its laws have meaning," Lynch wrote.

The Illinois Federation of Teachers also issued a statement.  "Rather than offer concrete solutions on how he will better fund our public schools and services, the Governor continues to engage in unproductive, partisan politics," said IFT President Dan Montgomery.  "Today’s executive order is an abuse of power and the democratic process, and we won’t stand for it. We are exploring all legal options at this point, and we fully intend to hold this Governor accountable to the U.S. Constitution, Illinois law, and collective bargaining agreements."

Illinois' General Assembly can toss executive orders if they're deemed to exceed a governor's authority; Democratic Senate President John Cullerton said in a statement that his legal staff is E.O. 15-13.