Illinoisans can now get driver’s licenses and state ID cards that comply with Real ID, the strict federal security requirements that will soon be needed for air travel.

Real IDs are optional — the only people who need them are those who fly, or who enter restricted federal facilities and nuclear power plants.

Henry Haupt, a spokesman for the Illinois Secretary of State’s office, says people have plenty of time.

“There is no need to rush out to apply for a Real ID,” Haupt says. “Current Illinois driver's’ licenses and ID cards will be accepted for domestic air travel and entering secure federal facilities until October 1, 2020.”

Real ID sets national standards for how people prove their identity when seeking a drivers license or other state ID.

It's has been a long-time coming. The law was enacted 14 years ago — it was one of the recommendations of the 9/11 Commission:

“Secure identification should begin in the United States.The federal government should set standards for the issuance of birth certificates and sources of identification, such as drivers licenses. Fraud in identification documents is no longer just a prob- lem of theft. At many entry points to vulnerable facilities, including gates for boarding aircraft, sources of identification are the last oppor- tunity to ensure that people are who they say they are and to check whether they are terrorists.” — The 9/11 Commission Report, p. 390 (via NCSL).

Obtaining a Real ID-compliant drivers license or state ID requires a sheaf of documents, including a birth certificate or passport, tax returns, utility bills and more. (The Secretary of State's office created an interactive checklist to help Illinoisans figure out what documents they'll need.)

“The federal government basically wants you to start from scratch on proving your identity,” Haupt says.

Illinois was among many states that opposed the Real ID law soon after Congress passed it in 2005.

But a more recent federal decision to require Real IDs for air travel prompted most states to relent. 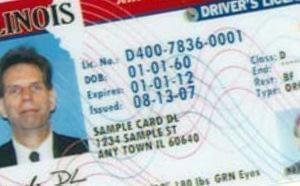