Party leaders and candidates rallied in Springfield Thursday at the Illinois State Fair, where the men competing for the top of the ticket each say they're uniquely qualified to revive the Illinois Republican Party.

Illinois Republicans are at a crossroads. The party has a historically small number of people in the Illinois Senate, and a small minority in the House, too. But Republicans are also hopeful about 2014, when they have the chance to win back the Illinois governor's office, ending 12 years of Democratic rule.

Party leaders and candidates rallied in Springfield Thursday at the Illinois State Fair, where the men competing for the top of the ticket each say they're uniquely qualified to revive the Illinois Republican Party.

It's appropriate that Republicans began the day with a meeting in a hotel off Springfield's Dirksen Parkway. Everett Dirksen was a Republican U.S. senator at a time when Republicans were not just competitive in Illinois, but in some elections were dominant.

They held the governor's job as much as they didn't, and often controlled at least one chamber of the General Assembly.

Not so in the last dozen years, when Democrats have had a lock on the Supreme Court, legislature and governor's mansion. 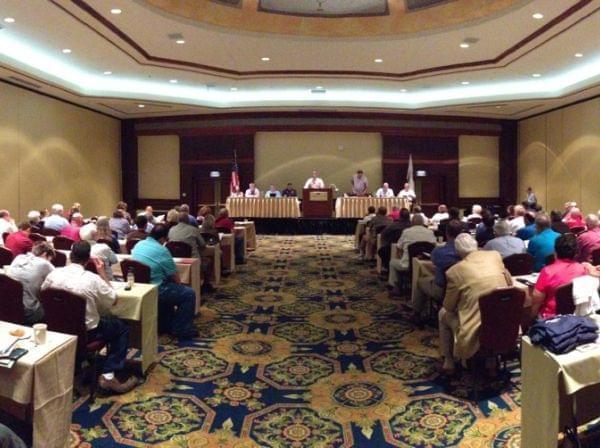 More than a hundred Republicans heard from their party leaders and top candidates at the State Central Committee and County Chairmen’s Association meeting on Thursday in Springfield. (Brian Mackey/IPR)

It's in this climate that four men are trying to make the case for why they're best suited to return Republicans to power. Speaking before a gathering of more than a hundred top GOP officials, State Treasurer Dan Rutherford says Republicans need to go beyond their traditional base — mostly white, suburban and rural voters.

"I know that going into communities of diversity is imperative for us as Republicans to earn the right to govern," Rutherford says.

Rutherford points out he got more votes as a candidate for treasurer in 2010 than Pat Quinn did in winning a term as governor. He says that was only possible because he was at least marginally competitive in Chicago, winning 22 percent of the vote.

"You can't do that with just us as Republicans," he says. "We have to be able to attract people from the Democratic Party and independents."

State Sen. Kirk Dillard sounded a similar note in his speech. Well, first he recalled his time as chief of staff to Gov. Jim Edgar, in the 1990s. That's when there was a two-year interruption to House Speaker Mike Madigan's long reign.

"We made Mike Madigan the minority leader, and we've got to do it again," Dillard says.

But a little later in his speech, Dillard tacitly acknowledged it's unlikely the Democrats would lose control of the House or Senate. Dillard says the party needs a candidate who can deal with that reality. 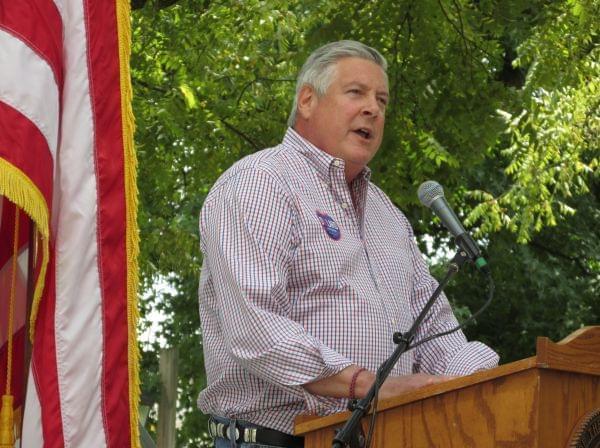 State Sen. Kirk Dillard, who came within 200 votes of winning the Republican nomination for governor in 2010, asks party members for another chance on Thursday at the Illinois State Fair. (Amanda Vinicky/IPR)

It's on those types of questions about governing style that the candidates set themselves apart.

On questions of policy, they all talk a good game about cutting state spending and enacting laws they say will improve the job climate in Illinois. But contrast Dillard's assertion he can govern a "Democrat legislature" with Republican businessman Bruce Rauner, who's promising to take office in a confident fighting crouch.

"I love to fight. I love to win," Rauner says. "I've been a leader at everything I've touched throughout my career — both in business, and in our civic leadership here in Illinois."

That was Rauner's message at the morning meeting of the State Central Committee and county chairmen. Before lunch, everyone piled into their cars and drove north — on Dirksen Parkway — for a rally on the Illinois State Fairgrounds.

Now, Rauner would deliver an even more pointed critique: "I love the state, and we're going down the drain. We're in a death spiral. And the career politicians in Springfield have failed us repeatedly." 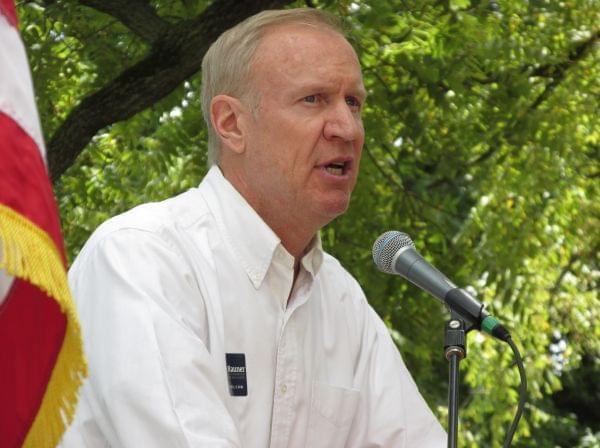 Businessman Bruce Rauner tried to brand himself as political outsider in a speech to Republicans at the Illinois State Fair on Thursday, as he vies for the GOP nomination for governor. (Amanda Vinicky/IPR)

Notice he didn't confine his attack to "career Democratic politicians."

The last name in the race should be a familiar one — state Sen. Bill Brady, who narrowly lost to Quinn in the last election. Brady says he's eager for a rematch.

"You know, I played sports in high school and college, and you always love the idea of going up against the team that beat you the last time," he says. "And we've got the running shoes on."

Brady was actually wearing running shoes. But for that to make sense, you have to go back to a dig Gov. Quinn made the day before.

"I was given a nine percent chance of winning in the General Election. And we won. And Brady's still looking for his gym shoes," Quinn said.

Brady used this line in both of his Republican Day speeches.

"Gov. Quinn indicated that he beat me, and that I was still looking for my running shoes," Brady says. "Well ladies and gentlemen, I'm here today with running shoes on, and game on for the Republican Party." 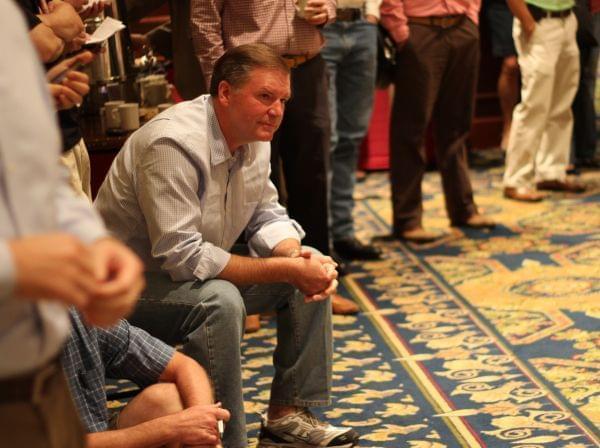 Now the hard work of campaigning begins in earnest. The candidates will soon have to announce their lieutenant-governor running mates. And they still have to figure out a way to impress Republican primary voters without tacking so far to the right it's difficult to appeal to independent voters in the General Election.

It's unlikely Republicans will be able to turn Illinois back into — as Brady suggested — a red state. Owing to favorable district boundaries and the changing demographics of Illinois voters, it would be a real challenge to take back the Illinois House or Senate.

But the GOP came within one percentage point of winning the governorship in 2010. And that suggests next year, the office is at least potentially within their grasp.