McCain leaves behind his wife of 37 years, Cindy; seven children, including three from his first marriage, to Carol Shepp; and his 106-year-old mother, Roberta McCain.

Perhaps America's most famous prisoner of war, the former Navy pilot with a famous admiral father was shot down over Vietnam and spent 5 1/2 years as a POW in the north, most of that time in a prison sarcastically termed the Hanoi Hilton for the way inmates were treated.

McCain endured torture at the hands of his captors, a cause he would speak out against 40 years later as a United States senator during the Iraq War following the Sept. 11, 2001, terrorist attacks on the United States. McCain even voted against President Trump's nominee to be director of the CIA, Gina Haspel, for her role in overseas detention centers.

I believe Gina Haspel is a patriot who loves our country & has devoted her professional life to its service & defense. However, her role in overseeing the use of torture is disturbing & her refusal to acknowledge torture’s immorality is disqualifying. https://t.co/ocDtdqU2Sx

A Washington institution, McCain served in the Senate for more than 30 years, first entering public service as a congressman in 1982, just nine years after his release from the Vietnamese prison. 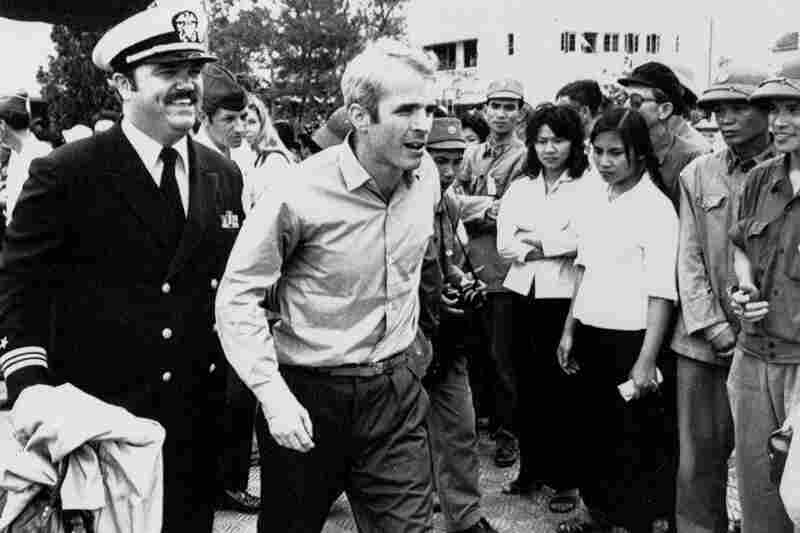 John McCain is escorted to Hanoi's Gia Lam Airport in 1973 upon his release after 5 1/2 years' imprisonment as a POW.
Horst Faas/AP 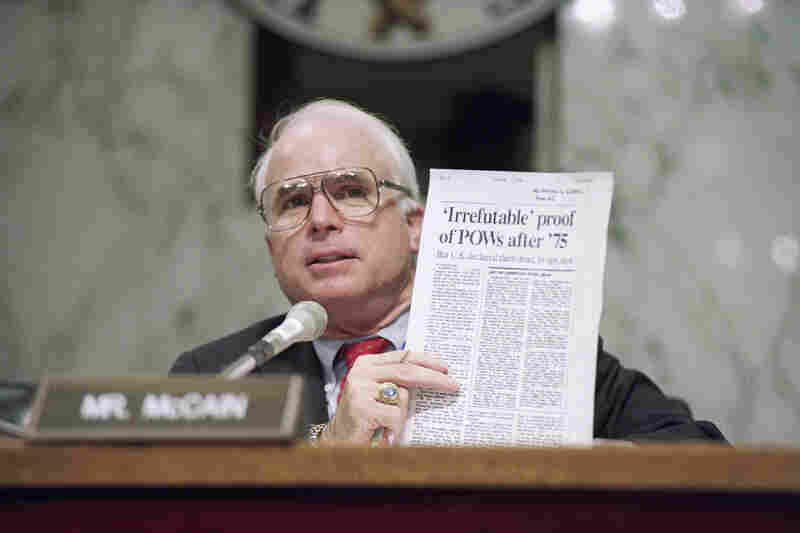 In 1992, McCain shouldered the long effort to account for American soldiers still missing from the war and to normalize relations with Vietnam.
John Duricka/AP 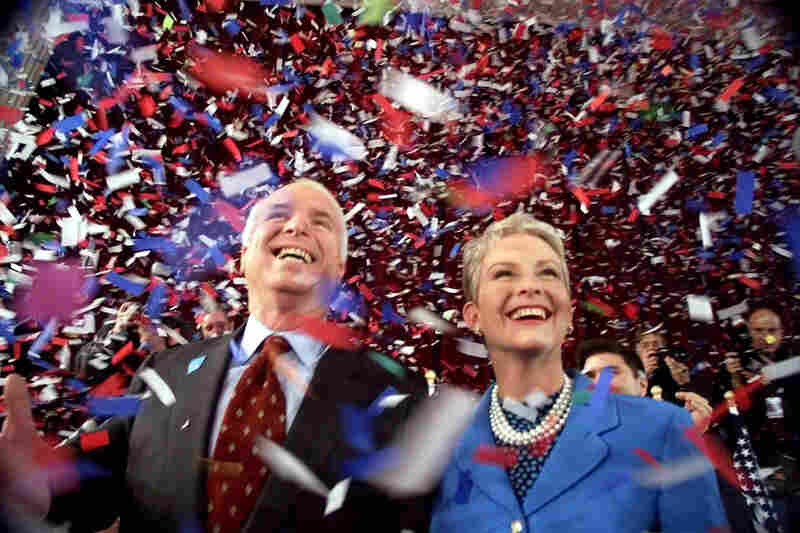 McCain and his wife, Cindy, on the presidential campaign trail in Peterborough, N.H., in 2000. McCain nearly swiped the nomination, trouncing George H.W. Bush in the New Hampshire primary.
Stephan Savoia/AP 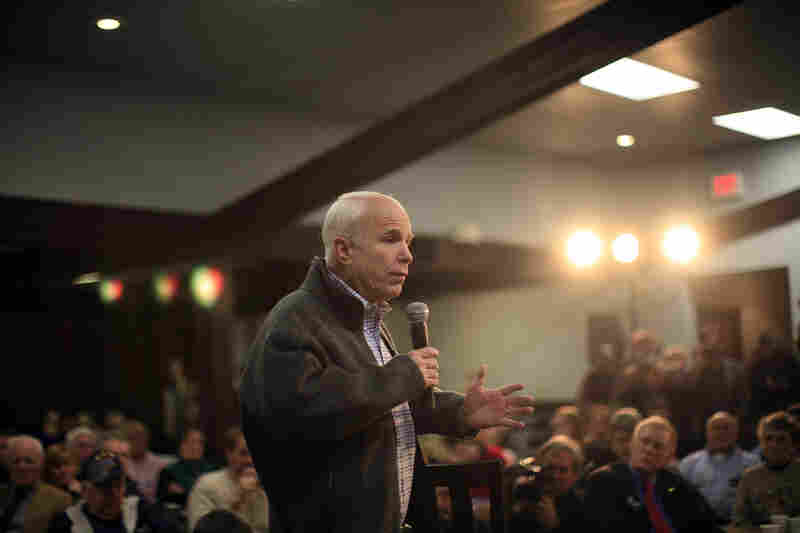 As a Republican presidential hopeful in 2007, McCain speaks during a town hall meeting in Des Moines, Iowa. He won the nomination that year and garnered nearly 60 million votes on Election Day, a sign of his resilience.
Eric Thayer/Getty Images 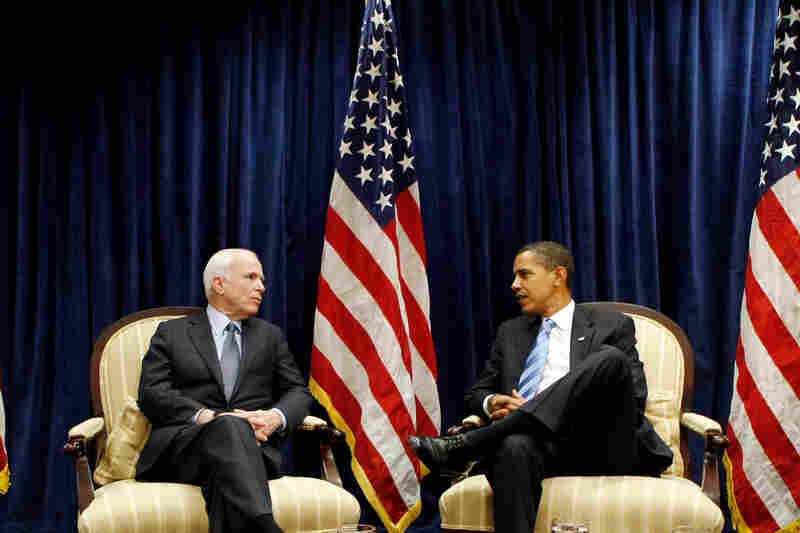 McCain meets with President-elect Barack Obama in November 2008. McCain showed tremendous grace in defeat, praising Obama and focusing the country on the historic nature of his candidacy.
Pablo Martinez Monsivais/AP 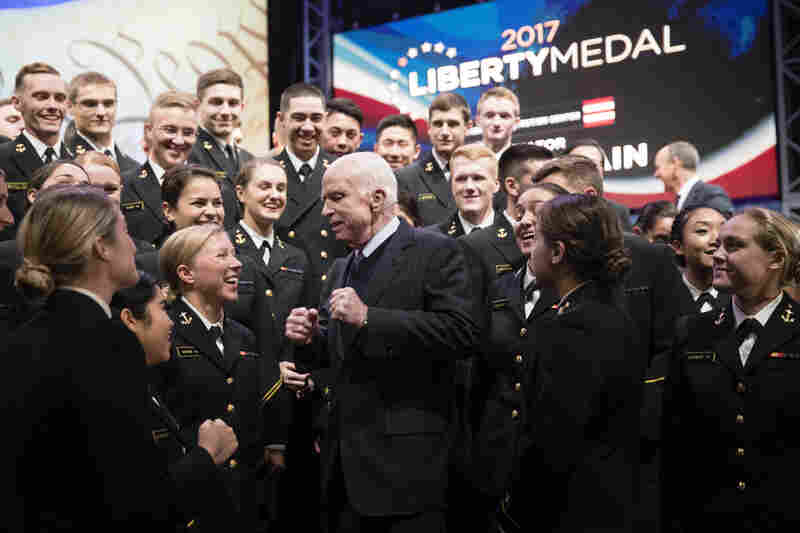 McCain meets with members of the United States Naval Academy Choir in 2017 after he received the Liberty Medal at the National Constitution Center in Philadelphia.
Matt Rourke/AP 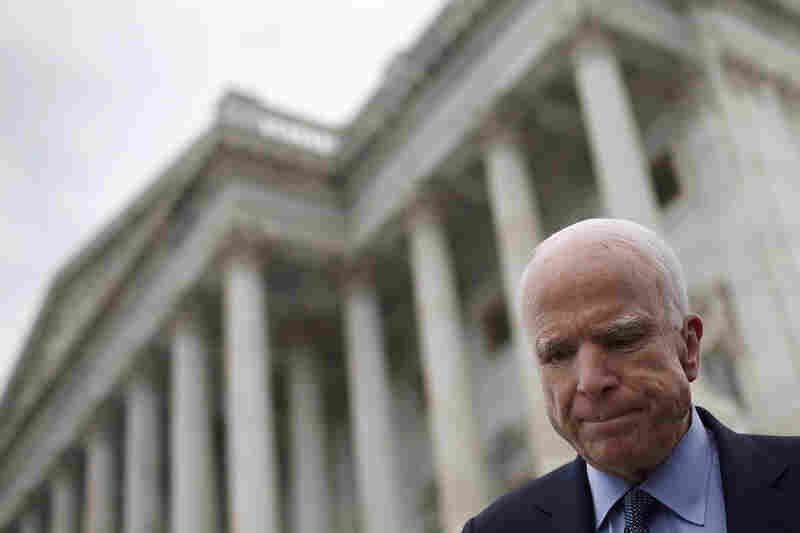 McCain regained some of his maverick image in his final years in the Senate as one of the few Republican lawmakers willing to criticize President Trump.
Win McNamee/Getty Images

"I made a small place for myself in the story of America and the history of my times," McCain notes, adding, "What an ingrate I would be to curse the fate that concludes the blessed life I've led. I prefer to give thanks for those blessings, and my love to the people who blessed me with theirs. The bell tolls for me. I knew it would. ... I hope those who mourn my passing, and even those who don't, will celebrate as I celebrate a happy life lived in imperfect service to a country made of ideals, whose continued success is the hope of the world. And I wish all of you great adventures, good company, and lives as lucky as mine."

The Arizona senator frequently clashed with President Trump. After McCain said in July 2015 that Trump "fired up the crazies," especially when it came to immigration, Trump fired back. He mocked McCain, saying, "I like people who weren't captured."

The chasm between the two men — one of the party's past and one of its present — centered on more than just personal attacks; it was very much about America's place in the world.

McCain laid it out in October 2017 during his acceptance speech for the National Constitution Center's Liberty Medal, in which he blasted "half-baked, spurious nationalism":

"To fear the world we have organized and led for three-quarters of a century, to abandon the ideals we have advanced around the globe, to refuse the obligations of international leadership and our duty to remain 'the last best hope of earth' for the sake of some half-baked, spurious nationalism cooked up by people who would rather find scapegoats than solve problems, is as unpatriotic as an attachment to any other tired dogma of the past that Americans consigned to the ash heap of history."

"Regardless of any political differences we've had," Biden said, "we've always stood shoulder to shoulder as staunch defenders of that enduring, bipartisan vision for vigorous, engaged American leadership of the liberal international order that was created after World War II. It's a vision that's under attack today."

McCain, who was a thorn in the side of the last three presidents, extended his criticism of Trump to action on subject matters beyond foreign affairs.

McCain effectively ended GOP efforts to repeal the Affordable Care Act in 2017, signaling his "no" vote on a repeal bill with a thumbs-down in the middle of the night on the Senate floor.

That move widened the gulf between him and the president. Trump would mock McCain at campaign rallies, without mentioning his name, when talking about the failed health care vote. And he tweeted his outrage toward McCain on multiple occasions following the vote. Earlier this month, Trump even declined to use McCain's name during an event about a defense-authorization bill — which had McCain's name on it. 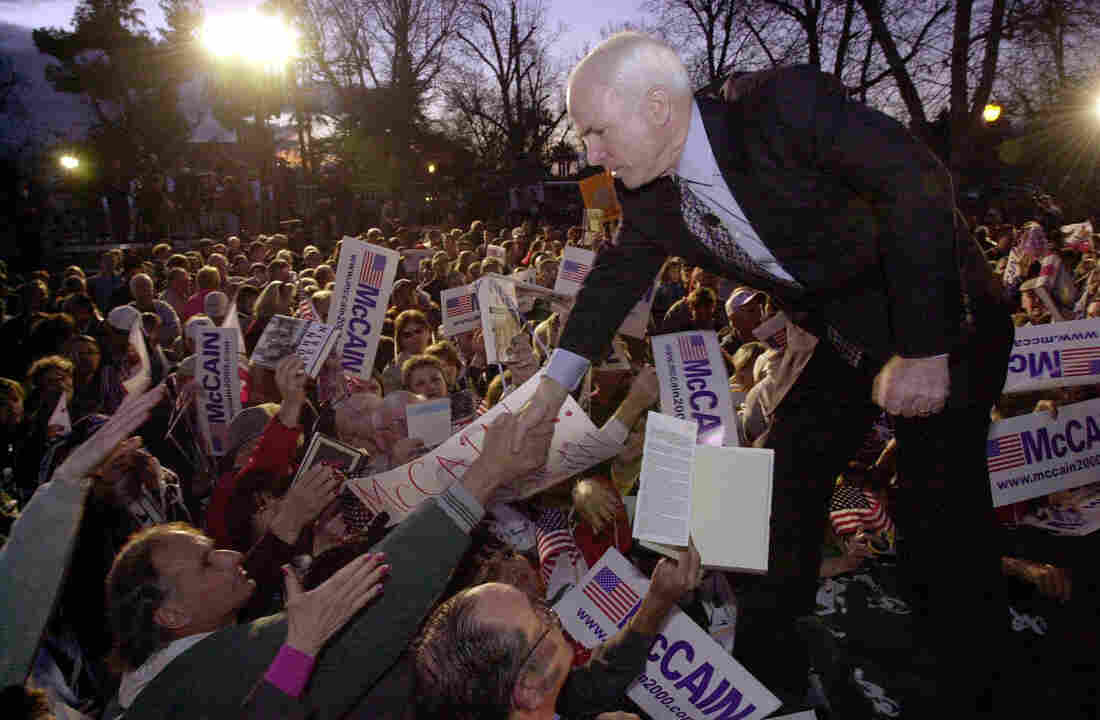 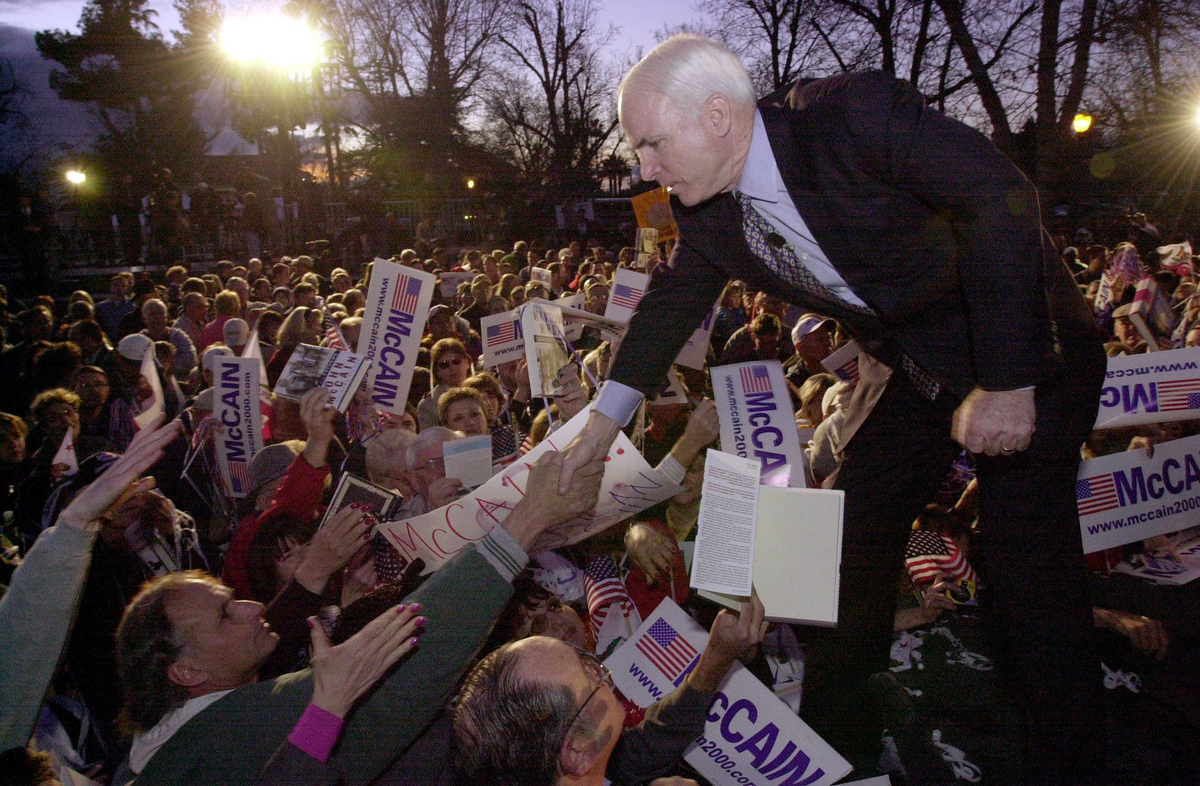 McCain overcame a savings-and-loan scandal early in his political career. He and four other senators had pressured regulators to back off their political benefactor Charles Keating. They became known as the "Keating Five."

Keating eventually served jail time for fraud. McCain was the only congressman involved to go on to serve long-term.

"It's amazing he survived that," Arizona State University professor Bruce Merrill told the Arizona Republic in 2014 following Keating's death. "And I guess one could argue that his political skills brought him through that."

McCain's willingness to buck his own party earned him the nickname "maverick," a moniker he wore proudly. But that independent streak — and his famous temper — did not always endear him to party leadership.

In 1999, McCain clashed with the GOP establishment in his run for president. Texas Gov. George W. Bush, son of former President George H.W. Bush, was seen as the far and away front-runner. But McCain nearly swiped the nomination, trouncing Bush in the New Hampshire primary.

Bush saw a massive lead evaporate in the next primary, in South Carolina. But Bush and his supporters in the state used a heavily negative campaign to derail McCain. There was even a whisper campaign that McCain had fathered a black child. McCain has an adopted daughter from Bangladesh.

The episode left McCain bitter toward the future president of his own party. 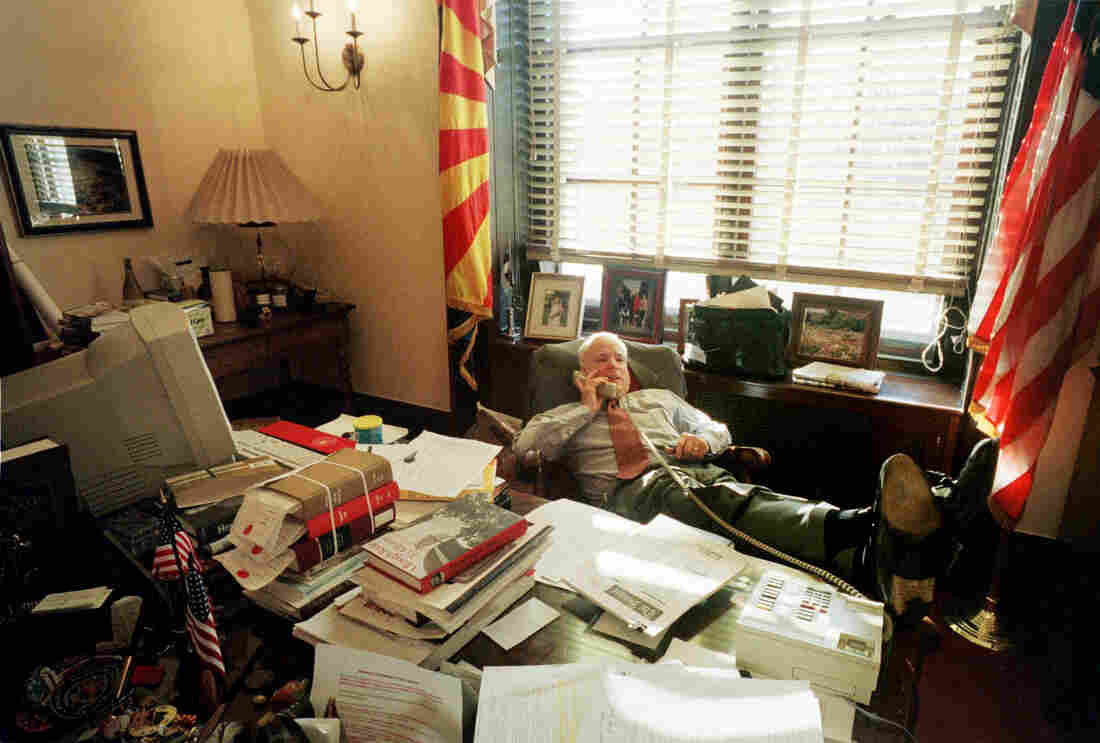 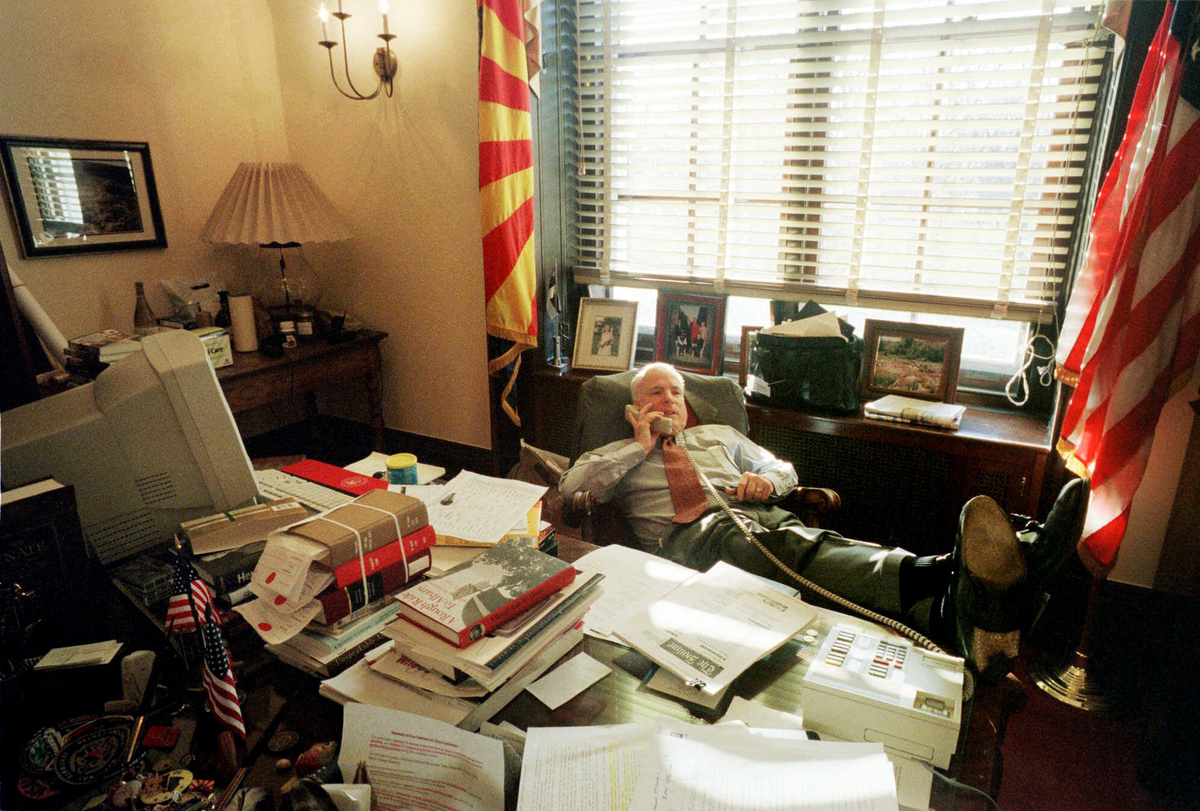 McCain makes a phone call while working in his Capitol Hill office during the Senate debate of the McCain-Feingold campaign finance reform bill in March 2001. McCain tackled the system of campaign financing with like-minded Democrats, an issue that split him from Republican leaders.
Stephan Savoia/AP

But McCain and Bush were able to work together on immigration. McCain, a border senator, championed Bush's comprehensive immigration overhaul effort.

It eventually collapsed because of a lack of support from rank-and-file Republicans. And it was something for which McCain had to apologize to the Republican base to win the 2008 presidential nomination.

The 2008 campaign: From "No, ma'am" to Sarah Palin and Barack Obama

The 2008 campaign, in which McCain received nearly 60 million votes on Election Day, showed McCain's resilience. In the summer of 2007, he was seen as an afterthought in the Republican primaries after his campaign collapsed and ran out of money. 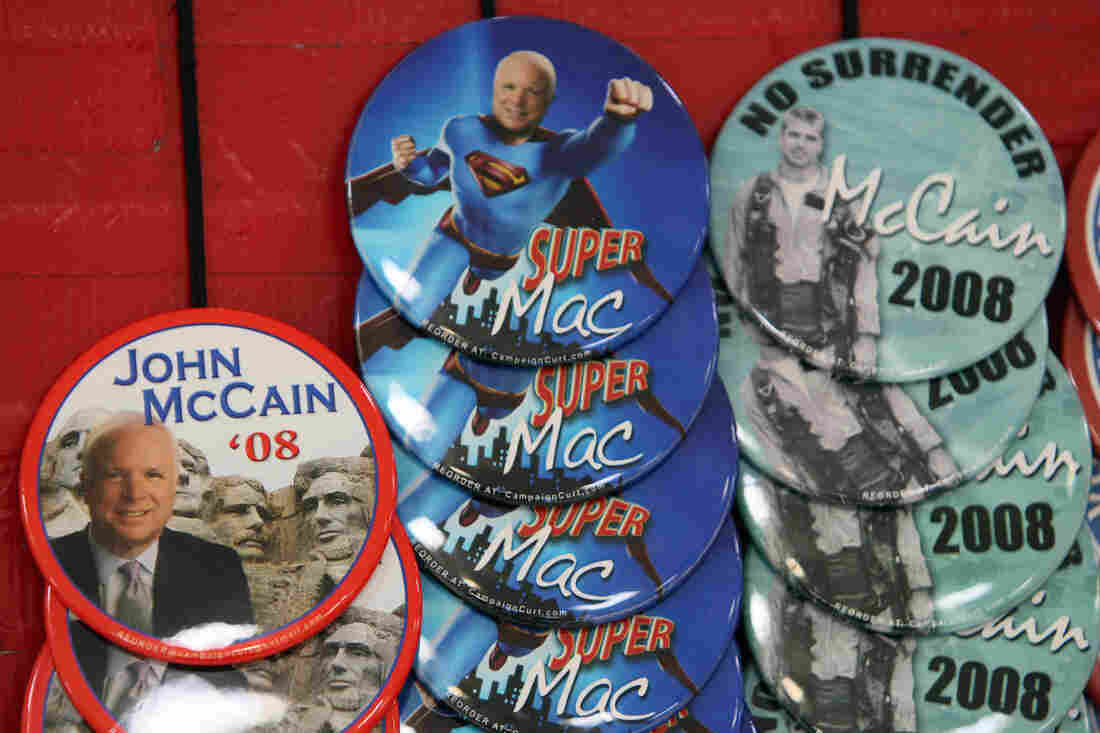 Campaign buttons for McCain on sale at a campaign rally in St. Louis in February 2008.
Don Emmert/AFP/Getty Images

But on a shoestring budget and a limited staff, he ran a campaign full of town halls, retail politicking and a particular openness with the media. He wound up overcoming the long odds, displaying the same stubbornness and determination he had shown surviving 5 1/2 years as a tortured prisoner of war that left him with injuries so bad, he walked with a noticeable limp for the rest of his life and could not raise one arm above his shoulder.

The Great Recession that began in late 2008 and the Iraq War during the Bush years proved impossible for McCain to overcome. McCain, needing a boost, took a chance with his vice presidential pick. He put Alaska Gov. Sarah Palin on the ticket.

It was a move that looked smart early on, as he got a bump in the polls, and Palin would routinely draw larger crowds than McCain himself. There was so much excitement with the base around her being on the ticket, some people would cut off the McCain portion of their McCain-Palin bumper stickers.

The jolt was short-lived. Palin would make missteps that had a negative affect on the campaign. But her star turn with the base would inspire the outgrowth of the Tea Party, help Republicans take back the House in 2010, and lay a lot of the groundwork that made a Trump presidency possible.

Compounding the difficulty of McCain's campaign was Barack Obama, McCain's Democratic opponent. Obama was young and dynamic and would be the nation's first black president.

In a notable moment during the campaign, McCain defended Obama's identity against a woman who said she was uncomfortable with Obama, whom she declared an "Arab."

"No, ma'am," McCain said in a video that went viral. "He's a decent family man, a citizen that I just happen to have disagreements with on fundamental issues, and that's what this campaign is all about. ... I admire Sen. Obama and his accomplishments. I will respect him. I want everyone to be respectful, and let's make sure we are, because that's the way politics should be conducted in America."

McCain also showed grace in defeat, praising Obama and focusing the country on the historic nature of his candidacy.

"Sen. Obama has achieved a great thing for himself and for his country," said McCain, who grew up a generation before the passage of the landmark Civil Rights Act.

Back to the Senate 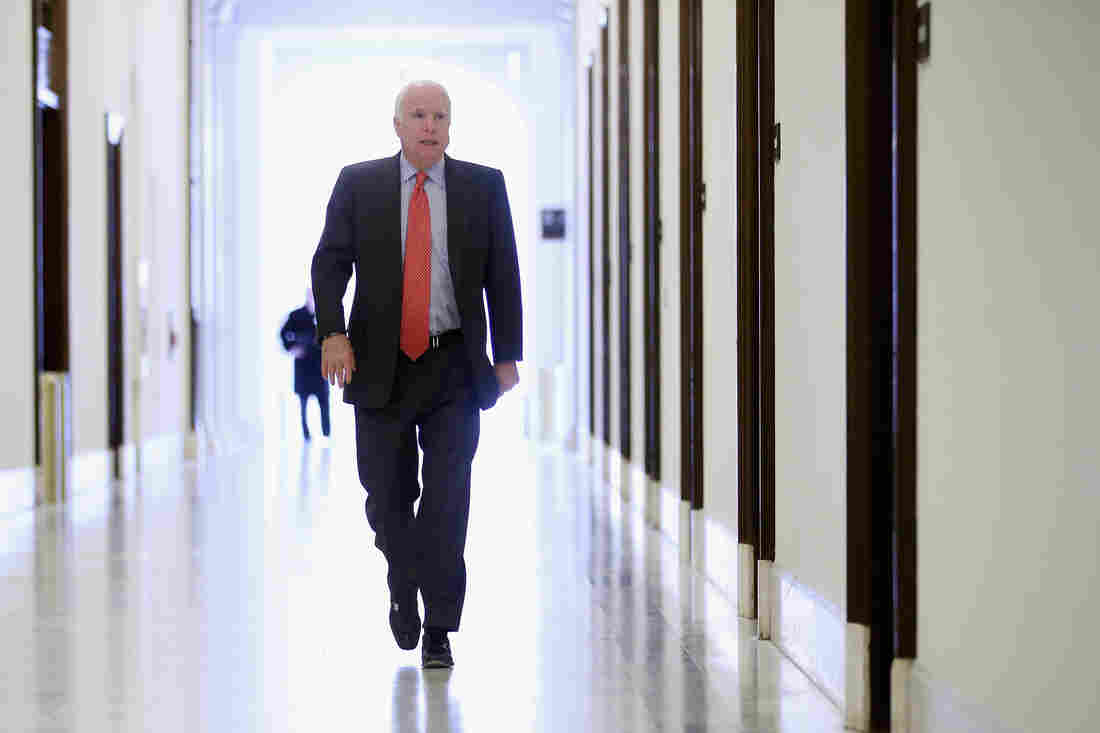 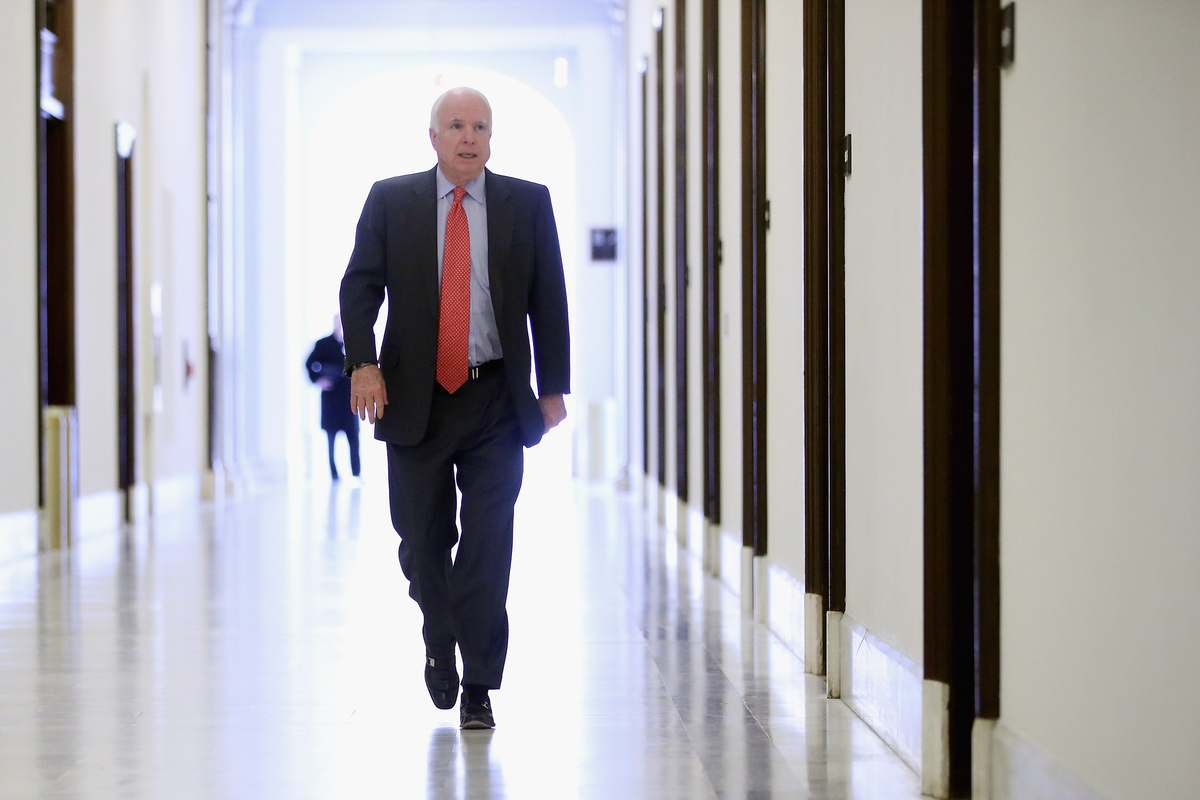 McCain heads to his office in the Russell Senate Office Building in 2013.
Chip Somodevilla/Getty Images

McCain served 10 more years in the Senate, facing serious primary challenges in 2010 and 2016 that forced him to take more hard-line conservative positions during those campaigns than he had in the past, particularly on immigration and border security.

McCain spent his final years in the Senate as chairman of the Armed Services Committee, championing higher defense spending. He also regained some of his "maverick" image as one of the few Republican lawmakers willing to criticize Trump.

"The senator has always understood that people in positions of power have a responsibility not only for what they say, but for what people hear," said Pablo Carrillo, who worked for McCain for 15 years and served as his chief of staff from 2013 to 2017. "And in that sense, I think that his approach to governing and leadership would have been guided by that in mind. Indeed, that's something that we are well-served in remembering, especially those with responsibility." 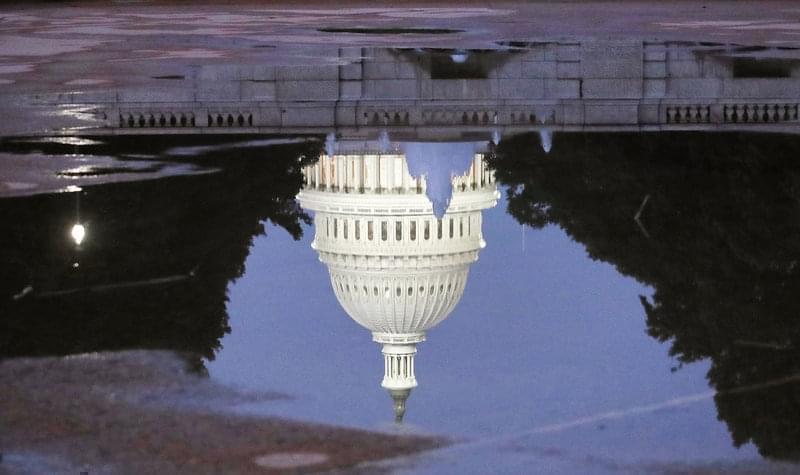 What Is The ‘Regular Order’ John McCain Longs To Return To On Health Care? 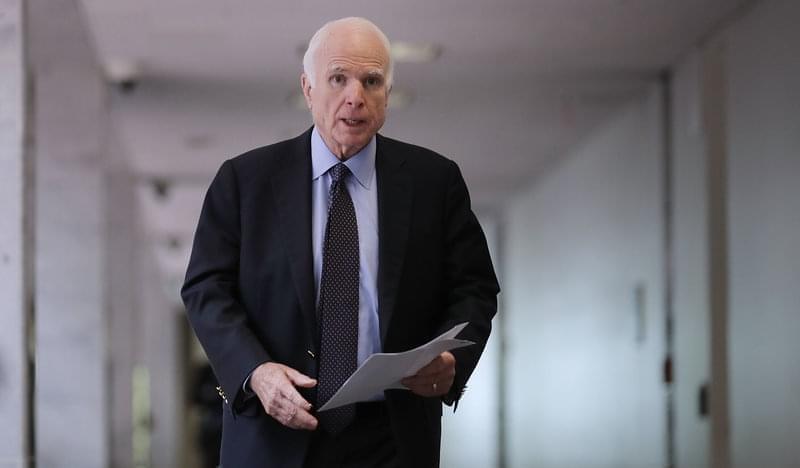 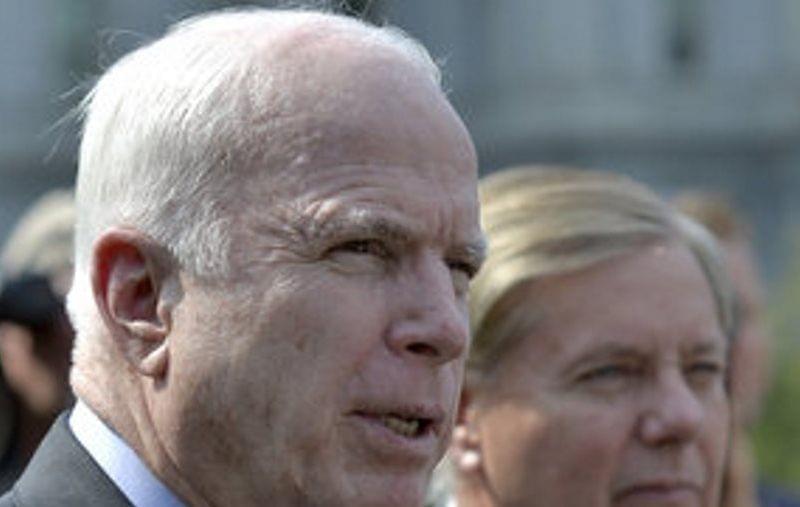 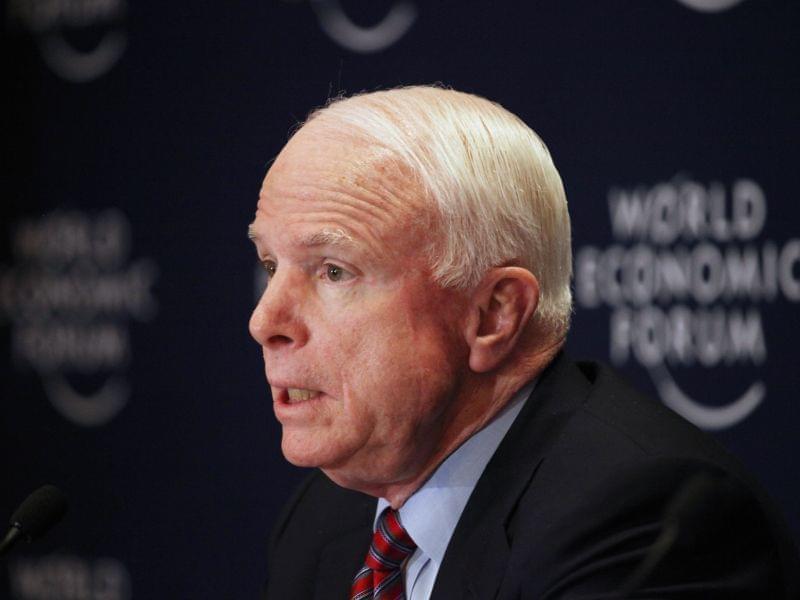