Behind a tall security fence and countless coded keypads, the future of the Delavan economy is growing under bright lights.

There are around 60 workers at this Revolution Enterprises medical marijuana cultivation facility. The 75,000-square-foot building does production from start to finish—from seed to packaging. 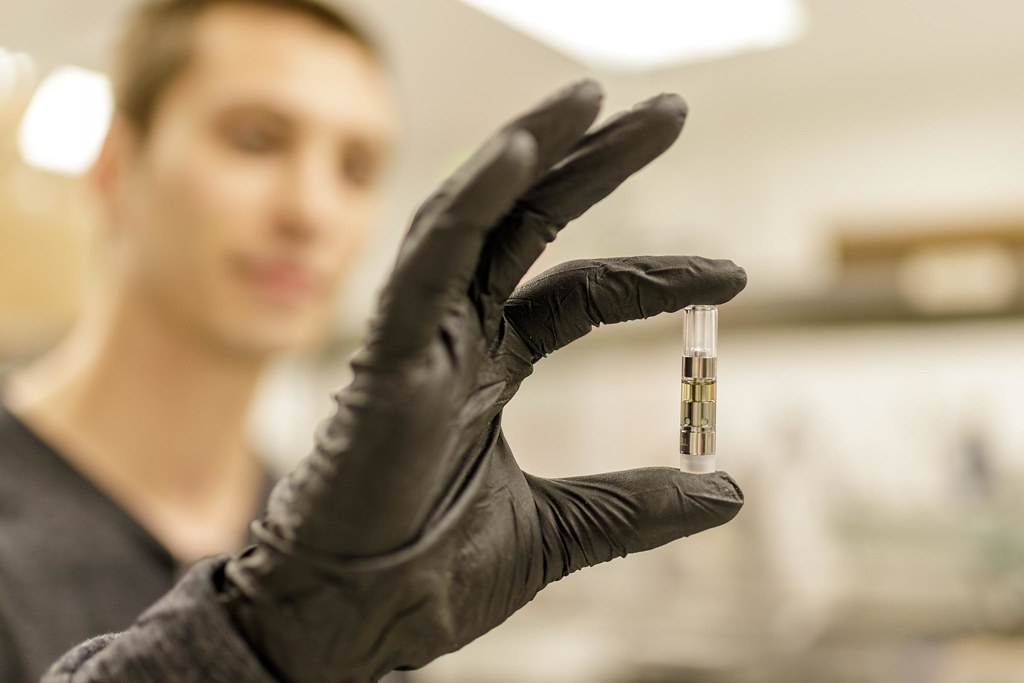 During a recent tour, what was striking is how much of it is done by hand—not automated. That means high quality, and that means jobs.

“Obviously the most care is taken in the grow (stage),” Revolution Senior Vice President for Operations Todd Cesek. “But we still have to continue that same delicate care throughout trimming, and cure, and packaging, to get that end product to the customer as highest quality as possible.

The state’s medical marijuana program has only around 61,000 patients. But it's injected a lot of life into the local economy in places like Delavan, a town of 1,600 people south of Peoria and west of Bloomington-Normal.

That's economic impact could grow with demand if Illinois legalizes recreational marijuana. A report from the Illinois Economic Policy Institute and the Project for Middle Class Renewal at the University of Illinois at Urbana-Champaign forecasts that legalization will create 23,000 new jobs at more than 2,600 businesses in Illinois.

Revolution now has around 110 employees in Illinois. Revolution CEO Mark De Souza said they’ve already bought 70 more acres in Delavan and want to build another 650,000 square feet of growing and processing space. That investment is “more than” tens of millions of dollars, he said, declining to say an exact figure for competitive reasons.

“I can see that workforce (in Delavan) on a rotational level being as high as 300 to 350 people,” De Souza said.

City officials say Delavan is already getting over $300,000 in new tax revenue from Revolution, plus another $70,000 for the school district.

De Souza said he sees it as a partnership he hopes will continue pay off.

“It’s making sure that they have stronger broadband. Making sure we get them … a grocery store down there. Maybe even a rotational doctor’s office. Things that community has kind of been missing for many years as the economy has waned. We look at this as a very serious relationship with the town and the mayor. We want to be a long-term and strong and positive impact,” he said.

Delavan Mayor Liz Skinner says Revolution has been a good neighbor. Speaking recently on The 21st, Skinner said she has reservations about legalizing marijuana but thinks it's inevitable.

“So if it is going to happen, I would certainly want Revolution in our community to be a part of that,” said Skinner.”

State law currently allows for one medical marijuana cultivation facility for each State Police district, so up to 22.

A new report commissioned for the Medical Cannabis Alliance of Illinois found that existing cultivation capacity could meet demand for both medical and recreational use for the first two to four years. That's space already running or approved by the state.

But five years after legalization, it says another million square feet of cultivation space will be needed to meet demand from Illinois residents and tourists.

Delavan isn't the only small town hoping to reap the benefits of expansion.

Cresco Labs has a cultivation facility just outside Lincoln in Logan County. Officials say it employs a few dozen people, though Cresco did not respond to requests for comment.

Logan County Board member Dr. David Hepler sees them as 21st century agriculture jobs. He was County Board chair when Cresco came to town.

“We’ve had, like most communities, some losses,” said Hepler. “A Kroger store had to close. A bottle plant that’s owned internationally—it’s been here a long time—also closed. This has been a way to actually create new jobs that weren’t there before but probably have a long lifespan, but also fit the culture of this community very well.”

There are many unknowns with legalization. The social costs could be more impaired driving—maybe more crashes. Some even speculate about reduced workplace productivity.

But in small towns looking for jobs—any jobs—the Not In My Backyard folks are hard to find. Half of Lincoln residents don’t even realize the facility is there, said Mayor Seth Goodman.

“I just sold a house located right next to it,” said Goodman, also a real estate agent. “The guy didn’t even think twice about it being in his backyard. It wasn’t even something that was discussed.”