Sue Wood On 44 Years Behind The Altgeld Chimes

Sue Wood’s music is heard by dozens of University of Illinois faculty, staff, and students a day – but she’s seen by just a handful each week.

"I keep telling people it’s the anonymity of the place,” she said.  “Because nobody knows who’s up here playing.”

But the Chimesmaster, who’s played The University Chime at Altgeld Hall since 1971, said she’s gotten enough attention nowadays to where many passersby know the daily 12:50- 1 p.m. concert is performed by her or one of her students.

“Apparently it’s become quite popular this past year or so, because with 10 students I’m almost overwhelmed," she said.

Wood started attending University Lutheran Church as a graduate student in 1966, as was asked to play the 25-bell carillon there.  Altgeld’s 15 bells fall under the category of chime (since it has between 9 and 23 of them.)  A bell tower containing between two and eight bells, is called a ring or peal.

“The first two years I was (at Lutheran) and listening to that, I thought “I’ve never been near a bell tower before,” Wood said.

A short time later, the pastor, who knew Wood played piano and organ, asked her to play. For about two years, she also took lessons in Springfield’s Washington Park, at the Rees Memorial Carillon.

“Finally, I had to stop that, because it was two hours over, and then if I didn’t practice for a couple hours or more, it took a whole day,” she said.  “But by then, I was playing well enough I didn’t need to worry about the church, I could cover that pretty well every Sunday or Wednesday or whenever the occasion might arise.”

Aside from students, just two people have been responsible for Altgeld concerts since 1957 – Wood, and before her Albert Marien, who served as Chimesmaster for 37 years.

Now in her 44th year, Wood starting filling in for Marien in the early 70’s when he wasn’t available.  She was named Chimesmaster in 1995 when Marien was designated Chimemaster Emeritus. 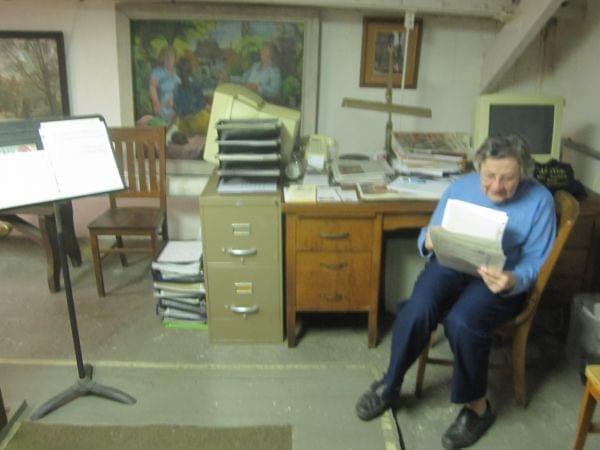 Bell concerts can be performed during any class passing period, but the regular time is the 12:50 p.m. performance

The traditional schedule is also set aside during finals week, including December 15, when Wood played an 11:30 am Christmas concert that included 'Jingle Bells', 'Blue Christmas', 'What Child Is This', and 'We Wish You a Merry Christmas'.

But she started last Monday’s performance with some Illini spirit.

“We always play ‘Hail to the Orange”, she said.  “That’s been tradition over the years, and so no matter what concert we’re playing, unless it’s a memorial concert of some time, we always put it somewhere so we don’t run out of time to play it.”

Players of the University Chime have mixed in some 2-thousand songs over the years, from traditional favorites to national anthems, to classic rock and contemporary songs (like Lady Gaga’s ‘Bad Romance.”)

“We’ve had Hedwig’s Theme from the ‘Harry Potter’ movies,” Wood said. “It doesn’t fit the keyboard here, and I always tell people if John Williams came up here, he’d say ‘what are you doing to my number?”

The classes of 1914-21, who donated the money for the bells, designed the keyboard to play Illinois Loyalty, which means the keyboard wasn’t quite chromatically correct, missing a D-sharp and two F-naturals.

As for the holiday season, Wood says a few Christmas tunes are mixed in to the concerts starting December 1, and she’s added a few more each year, (like “I Saw Mommy Kissing Santa Claus.”)

She won’t play “Grandma Got Run Over By A Reindeer.”

Anyone wanting to play the bells can come up during the public tour time of 12:30 to 1 p.m. weekdays and try out the practice keyboard. Due to the size of the room just below the chimes, tours are limited to 25 people.

Wood expects to retire from this voluntary job in the near future, saying the turret staircase at Altgeld is getting a bit more difficult.

She celebrates her 81st birthday next Sunday.

“The (U of I Urbana) Provost’s office is trying to come up with some means of perpetuating this,” she said.

Wood estimates she’s missed no more than two weeks a year since 1971.  She has a number of students, but says there’s no one ‘waiting in the wings’ to take her place.

“One of these days, it’s going to be a little difficult to get up to the tower,” Wood said.  “But until that happens, I’ll stick around.”