Springer and around 50 fellow students marched recently through the campus of Northern Illinois University in opposition to the way the school handles cases of sexual misconduct.

These cases are typically probed through a process called Title IX, a federal civil law. Students say it's time for the Title IX process to change.

"[The Title IX process] is making people want to drop out of school," said Springer, recalling her own experiences. "That's not okay."

Springer said she filed a Title IX complaint after being sexually abused last fall. She said after seven months of investigation, her case was closed and deemed inconclusive.

"I had enough proof. I had text messages, him apologizing for what he did... he admitted to what he did to Neptune Housing," said Springer. "I was going to leave the school but I realized that this is a problem with all universities."

"We shouldn't have to continually prove the fact that this happened to us only to be denied, only for evidence to be brushed under the rug," she said.

Springer said after her case was closed a few weeks ago, she shared her experience with Title IX on Facebook. Her post was shared more than 800 times. She said knowing she wasn't alone motivated her and her co-student, Sandra Puebla, to organize.

But she said she and other university officials are listening. While Garner is the lead coordinator of the program, NIU has one investigator for Title IX cases. Garner said there are extra trained investigators and deputy coordinators that fill in when needed. She said policy changes might happen after next semester.

"I want to look at staffing within investigations, but I'll see whether we need to maybe, perhaps, have more advocates on campus to fill that need as well," said Garner.

Garner said case work could be more streamlined but being thorough is a priority.

"There's a fine balance between being a quick investigation and being a comprehensive investigation," she said.

Some students were also disappointed in a Title IX forum held on campus days before the protest. Some say it felt reactive rather than proactive. Springer said it was focused on presentation rather than listening, and wants to see more space for student input.

Puebla said she was uncomfortable with police presence at the forum because of a mistrust that law enforcement would take sexual misconduct concerns seriously.

"The police are the first ones to invalidate what happened to us. And so them being the first source of contact is not necessarily beneficial to students," said Puebla.

Some people who file a Title IX complaint of sexual misconduct also notify police. Filing a Title IX complaint is different than pressing charges against someone. Garner said if someone wanted to pursue that avenue, police were there to answer questions about the process.

"[The forum] was going to follow up to the protest on Monday night, but due to the weather the protest was postponed until Friday. So the timing was a little different than originally anticipated. But we do understand that A, we have an indoor event, and B, this is an important item. So we didn't want to postpone the forum any longer," said Garner.

"There are some things that are mandated by federal and state law...we obviously need to honor the law, but where we do have the ability to adjust our processes to be student friendly, we are certainly going to take a look at every opportunity to do so," said Wesener-Michael.

Federal officials are currently looking at changes to Title IX. Secretary of Education Betsy Devos introduced proposed rulings on the Title IX process last November. Those rulings would, in part, allow for cross-examinations at hearings, and change the way evidence is shared and considered. NIU shared feedback on the proposal, asking federal officials to reconsider aspects of the rule. Title IX coordinators like Garner are in the dark as to when changes could become law.

"There's been a lot of speculation out there as to when. It could be as early as the fall, it could be as late as a year from now," said Garner. "So it all depends."

And students will have to wait until at least the fall to see how NIU will act on their comments. 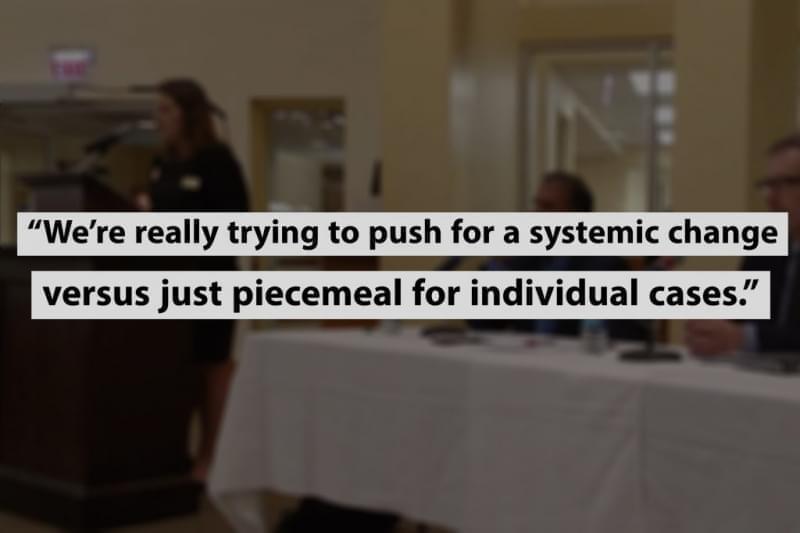