Last weekend at Garden Hills Elementary School, dozens of fourth and fifth graders showed off their work at their second annual science fair. It's the result of a partnership between Unit 4 and University of Illinois students and faculty who hope to change the way under-represented students view science, and themselves.

Joseph Smith is a member of the St. Elmo Brady STEM academy in Champaign.  He is also, only in the fifth grade.

“So what we have here is an LED. Now you have to remember the short side of the LED is the negative and the longs side is the positive,” he said. “You can invent things and it’s cool how you can make mistakes then you can recover form that by doing something better.”

Smith is building a circuit where he connects wires together to help light up a small LED bulb. He is only one of roughly forty boys who meet in the after school science program. The group consists entirely of under-represented boys.

The program was co-founded by Jerrod Henderson. He is a lecturer at the university of Illinois in chemical engineering. He says this demographic of boys typically doesn’t get exposure to the stem field.

“If you look at the statistics, graduation rates, college enrollment rates, they’re all really really low for under represented students.  And so we thought this would be a way to hopefully one day increase the pipeline of students that are considering college first of all, but then maybe considering STEM careers,” he said.

They take the kids to science museums and get them to see science in a way they’ve never experienced it in a classroom. They hope this gets the boys interested in pursuing a career in STEM fields. 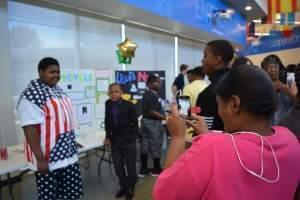 Everything they’ve learned all year came together at their annual science fair where families shuffled from booth to booth, taking pictures of their student and asking questions about the experiments.   At the awards ceremony many of the parents had bigger smiles than their students. Henderson said it was great to see families supporting the boys, but he especially pushes for dads to come.

“We’re trying to make those connections with the males in the family," he said. "You know when there’s strong men in the family then they can go back and lead the family. In this population fathers are sometimes not in the home. So our staff members, the males, we’re hoping to be role models for these boys.”

One of those role models is Reico Carter. He even won and award for it. He is a father of one of the boys in the program. He says even though he may get on his son’s nerves, he never misses a chance to be there.

“I know it helps him out in the end, but you know because he has that support. I’m always there to support him, and the other kids too," said Carter. "So its like I’m the dad in the classroom. I look at it like they’re my children as well.”

Eric Seabron wishes this academy was around a long time ago.  He is a volunteer in the program and a graduate student at the University of Illinois. He says he is the only black student in his class of 70.

“I know that there was no program like this when I grew up, and that if there was a lot of my friends would have probably also have joined along and a lot of them have fallen to the wayside because this society is not necessarily conducive for black engineers to succeed,” he said.

Jerome Davis volunteers as a tutor for the boys. He says the main goal is to teach students that they have options for their future.

“In the beginning of the year we ask all the kids what they want to be and, I would say, 98 percent of them say either a football player or a basketball player'" Davis said. "And then we ask them midway through and probably half of them said some kind of scientist or engineer.” 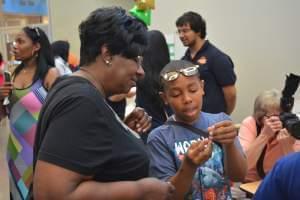 After Joseph Smith finishes setting up his LED project for the science fair he demonstrates an open and closed circuit as people walk by.  The fifth grader says the hardest choice is picking just one career.

“It’s hard because either I’m being a scientist or a paleontologist, I don’t really know, because I like dinosaurs, they’re cool, and the T-Rex is my favorite," he said.

Smith’s Grandmother, Kendra Friend, says the program gave her grandson more confidence. Whether he goes into science or not, she knows he can do anything he wants to.

“So if that continues to be his dream I hope that he can fulfill that. I’m just confident now that whatever he choses at least he knows that I can," Friend said. "He might be president, who knows.”

The program was named after St. Elmo Brady, who was the first African American to receive a chemistry Ph.D.