Last week, the Cancer Community @ Illinois in partnership with Carle Cancer Center announced a new graduate program in cancer research. The Cancer Scholars for Translational and Applied Research (C*STAR) graduate educational program is currently accepting applicants and will begin in the fall.

The C*STAR program will give funding for six existing University of Illinois graduate students to work on a specific cancer research project for up to three years alongside a faculty member from the Cancer Community @ Illinois and a clinician mentor from Carle. The students and projects chosen will be announced in early July. 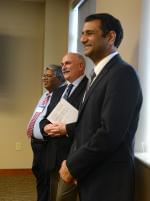 “I think in the ideal case these projects would come from a conversation between a clinician and the scientists on campus and it would be something that is co-developed, hopefully something that is new that would arise from these conversations and that the student can take off and work on,” said Rohit Bhargava, the Coordinator of the Cancer Community @ Illinois, a researcher with the Beckman Institute, and a professor of Bio-Engineering.

Bhargava says that over the next month the student, faculty member and physician would have to get together and decide on a project – they just need the idea though, all of the details can come later.

“We hope to stay on the cutting edge of research towards health care and cancer care,” says Magesh Sundaram, division head of oncology services at Carle Cancer Center.

“That’s the opportunity where we would have U of I people coming to the cancer center or we would have clinicians going over to the university and working together,” he continued.

Alongside the C*STAR program, Carle is instituting a release time program for some of their clinicians where the doctors would have office hours on campus and faculty or students could sit down with them and plan new projects or review ongoing research projects.

Both Sundaram and Bhargava say they hope that the partnerships will increase funding, add new dimensions to each group’s cancer research and increase their progress.