At a Chicago area farmers market in July you won’t see many signs of the California drought. This is the time of year when produce lovers can pretty much gorge on all the local cherries, blueberries and zucchini they want.

But this wasn’t the case in January.

“What we saw was extremely high prices on kales, leafy greens etc in the first part of the year,” said Bob Scaman president of Goodness Greenness the Midwest’s biggest distributor of organic produce.

And as the year wore on, Scaman says, the effects of the drought only got worse. Farmers had to decide which crops they were going to water and which they weren’t resulting in what he called the California “cherry season that didn’t exist in 2014.”

Luckily, the Washington State cherry crop was booming this year. And today Michigan cherries have filled any other gaps. But Scaman warns that this bounty will last for only about another 100 days in the Midwest.

“But going into the late fall, early winter when we are relying again on California we are going to be right back where we were on these drought supplies,” he said, “and we will be negatively affected back here in the Midwest.”

One Arizona State University study says that the California drought is likely to push items like avocados and lettuce up 28 to 34 percent.  And the USDA expects drought and other factors to push domestic food prices for meat and produce up 3 to 6 percent this year.

Business professor Timothy Richards who conducted the Arizona State study noted that the pricier California crops could drive more retailers to source their produce from Mexico and Chile. But others think we should go the other way and reestablish more regional food systems again.

“This is the ideal storm for the local food network in the Midwest,” Scaman said. “It really brings home what people have been talking about for years: the need to grow more local food, stabilize the food supply and build the local market.”

Adding to the drought problems this year were high summer gas prices that further argued for more localized food production.

“So not only is there less product but we are paying more to transport it from California,” he said. “You’ve got a double whammy coming at us. So when you look at local food supplies, we’ve got a little more stability in getting it to the marketplace, lesser freight costs and we are growing our local economies.”

Terra Brockman founded the Land Connection, a local non-profit that helps train Midwest farmers. She says that while the drought hasn’t made big waves among local farmers so far, it has revived important questions.

“Like, ‘Why do we have plenty of farmers market farmers and CSA farmers but not enough people growing at a slightly bigger scale that could produce quantities of fruits and vegetables that could go into our grocery stores and school cafeterias and other institutions where people are shopping and eating,” Brockman said. “It’s a question of building infrastructure and putting together policies and funding to make that happen.”

Bob Borchardt of Harvest Moons Farm in Wisconsin says he is already using some of them and investigating others.

“Some kind of controlled environment growing is really the answer,” he said, “whether it be greenhouses or hoop houses or inside and vertical gardens. Anything that we can do to push more local product into the non-conventional farming months here in the Midwest I think are things that need to be on top of our list as producers.”

Brockman notes that farmers can also extend the seasons by planting varieties of vegetables that mature early or late in the season.

“There’s like an early broccoli and a late broccoli,” she said. “One that comes to fruition earlier and later. Just not putting your eggs in one basket or not just planting one kind of broccoli you can sort of insure yourself from whatever the season might be.”

But she says the drought isn’t the only water related issue causing debate in Midwest agricultural circles.

“So that’s everything from erosion and soil washing into our rivers and silting them up and making them inhospitable for river life, and especially the run off. So in Illinois the main source of pollution in our waterways is industrial farming, and the amount of nitrogen fertilizer that runs off that becomes a dead zone the size of Delaware in the Gulf of Mexico is due to runoff from Illinois and Midwest corn fields.”

Brockman hopes that concern for our waterways will prompt Midwest farmers to swap synthetic fertilizers for crop rotations that take longer but can fertilize the soil naturally.

Scaman, however, has aspirations that go one step further. Given the growing demand for local produce and the richness of Illinois soil, he hopes the drought might convince some corn and soy farmers--whose harvests go primarily to processed food, animal feed and ethanol tanks--to grow crops suitable for local human consumption.

“Years and years ago, Illinois as an example was one of the largest vegetable growing states in the country,” he said. “We don’t necessarily need to just grow soybeans and corn. There is a need for vegetable production here in the Midwest to supply Chicago and other cities. And it provides a lot of economic opportunities for rural communities. So [the drought] has really brought that need to the forefront. You are seeing more and more farmers every year and more local produce. And the demand for local is off the charts.” 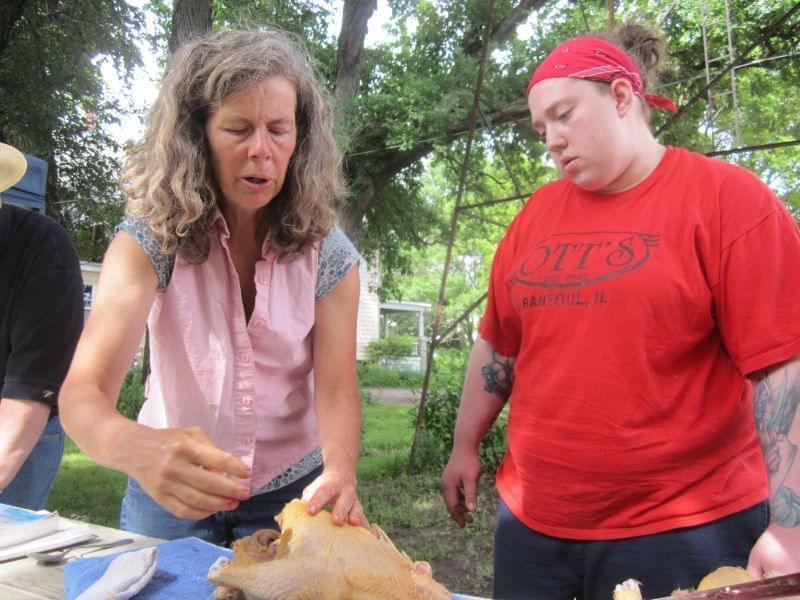 On The Farm, Chefs Learn The Basics To Food Production