Editor's note: This post contains language that is crude and explicit and that many will find offensive.

Just two days before Donald Trump and Hillary Clinton are set to meet for their second presidential debate, more damaging audio of the GOP nominee using crude language about women and how he would hit on them has surfaced.

After an uproar over the tape, Trump pulled out of an event in Wisconsin on Saturday at which he was to appear with House Speaker Paul Ryan. Trump also posted a video to social media saying the remarks don't reflect his true character.

On Friday afternoon, the Washington Post published a clip of Trump on a hot mic before an interview with Access Hollywood. In chatting with then-host Billy Bush, who is now co-host of NBC's Today show, Trump talked about kissing women and grabbing them between their legs (using far cruder language) without permission, because he's "attracted" to them like a "magnet."

The interview occurred before Trump was set to film a cameo on the soap opera Days of Our Lives, and he said, laughing, that he needed "some Tic Tacs, just in case I start kissing her."

In talking about kissing women, Trump boasted: "I'm automatically attracted to beautiful — I just start kissing them. It's like a magnet. Just kiss. I don't even wait. And when you're a star, they let you do it. You can do anything."

"Grab them by the p****. You can do anything," the Republican nominee continued, using vulgar slang for the female anatomy.

"There were seven other people on the bus with Mr. Trump and Billy Bush at the time," host Natalie Morales said of the incident, noting that camera crew, Trump's security guard and his publicist were all present. She revealed that Nancy O'Dell, currentlyEntertainment Tonight co-host, was the woman identified on the tape as "Nancy" that Trump had been captured speaking crassly about."

He said he even took her furniture shopping to try to get her to sleep with him.

Following the comments, Trump and the others get off the bus and are met by actress Arianne Zucker, who welcomes them to the soap opera.

In the video Trump released early Saturday morning, he said,"Anyone who knows me knows these words don't reflect who I am. I said it, I was wrong and I apologize."

He said spending time with people during his campaign travels has changed him. "I pledge to be a better man tomorrow and will never let you down," said Trump.

Then he made accusations against the Clintons: "Bill Clinton has actually abused women and Hillary has bullied, attacked, shamed and intimidated his victims." Trump said he would have more to say in the coming days.

Earlier, Trump had issued a statement saying the remarks to Bush were "locker room banter, a private conversation that took place many years ago. Bill Clinton has said far worse to me on the golf course — not even close. I apologize if anyone was offended."

In regard to trying to shift blame to Bill Clinton, Trump has also threatened to bring up the former president's infidelities in an attempt to damage his wife during the next debate. That's despite Trump's having been divorced twice and admitting to his own adultery. At the time of this 2005 recording, Trump had just married his third (and current) wife, Melania.

In a statement, Bush said about his part in the conversation, "Obviously I'm embarrassed and ashamed. It's no excuse, but this happened eleven years ago — I was younger, less mature, and acted foolishly in playing along. I'm very sorry."

Friday evening, Speaker Paul Ryan said the Saturday event at which he was due to appear with Trump would go on without the candidate:

"I am sickened by what I heard today. Women are to be championed and revered, not objectified. I hope Mr. Trump treats this situation with the seriousness it deserves and works to demonstrate to the country      that he has greater respect for women than this clip suggests. In the meantime, he is no longer attending tomorrow's event in Wisconsin."

Priebus, who has defended Trump after past controversial statements, issued a short but direct statement:

"No woman should ever be described in these terms or talked about in this manner. Ever."

This is far from the first time Trump has come under fire for using offensive language about women. Last fall, he criticized Fox News host Megyn Kelly for her tough questions during the first GOP primary debate and said she had "blood coming out of her wherever."

During the first general-election debate last week, Trump said actress Rosie O'Donnell "deserves" past insults he has made calling her a "pig" with a "fat ugly face."

And when Clinton brought up how he had mocked a former Miss Universe, Alicia Machado, after she had gained weight, Trump doubled down on his comments for days.

Reactions from around the political scene

House Republican Conference Chairwoman Cathy McMorris Rodgers, R-Wash., the highest-ranking woman in GOP leadership, said the comments "should not be part of our political dialogue":

"It is never appropriate to condone unwanted sexual advances or violence against women. Mr. Trump must realize that it has no place in public or private conversations today or in the past."

Illinois Sen. Mark Kirk, the most vulnerable GOP senator up for re-election, said in atweet that Trump was "a malignant clown - unprepared and unfit to be president of the United States." Kirk rescinded his initial endorsement of Trump earlier this year.

New Hampshire Sen. Kelly Ayotte, another Republican at risk of losing her seat, said Trump's past comments were "totally inappropriate and offensive" but that she wasn't rescinding her support. Ayotte came under fire earlier this week when she said in a debate that Trump was "absolutely" a role model for kids. She later walked back the comments and said neither candidate should be held up as role models.

Ralph Reed, who is chairman of the Faith and Freedom Coalition and who has endorsed Trump, told CNN that the comments by Trump rank low among the concerns of his supporters, that they are more focused on the issues of abortion, the economy and nuclear arms.

Tony Perkins, head of the Family Research Council, told BuzzFeed he also can look past the comments.

"My personal support for Donald Trump has never been based upon shared values, it is based upon shared concerns about issues such as: justices on the Supreme Court that ignore the constitution, America's continued vulnerability to Islamic terrorists and the systematic attack on religious liberty that we've seen in the last 7 1/2 years," Perkins said in an email to BuzzFeed News."

Trump's former campaign manager and CNN contributor Corey Lewandowski told the network the comments are troubling but "we're not electing a school teacher." He added:

"Is this defensible? Absolutely not. But what I do know is he's the person who's going to lead our country forward and we should think about what that true leadership looks like for the rest of the world."

"This is a moment of truth for Republicans. It is time for every Republican elected official in this county to revoke their endorsements of Donald Trump and state that they will not vote for their party's nominee, who has been caught on tape bragging about routinely sexually assaulting women. There is no way to defend the indefensible. In the name of decency, Republicans should admit that this deviant - this sociopath - cannot be president."

UPDATE: In an e-mail sent out at 12 p.m. Saturday, Congressman Rodney Davis of Taylorville announced he was withdrawing his support of Trump after hearing comments made in the 2005 tape.  He's asking Trump to step aside, so Vice Presidential nominee and Indiana Governor Mike Pence can serve in his place.

"As parents of a teenage daughter and teen twin boys, my wife and I teach them to respect women and that they will be judged by their words and actions. The abhorrent comments made by Donald Trump are inexcusable and go directly against what I've been doing in Washington to combat assaults on college campuses. Because of this, I am rescinding my support for Donald Trump and asking to have my name removed from his agriculture advisory committee. With the terrible options America has right now, I cannot cast my vote for any of the candidates, so I hope Donald Trump withdraws from the race so the American people can elect Mike Pence as our next president."

Carly Fiorina, who lost to Trump in the GOP primary, also called for him to step aside and for the Republican Party to run Pence in his place.

“Cindy and I will not vote for Donald Trump," he said. "I have never voted for a Democratic presidential candidate and we will not vote for Hillary Clinton. We will write in the name of some good conservative Republican who is qualified to be President.”

Pence released a statement via Twitter in response to Trump's comments in the video.

Trump isn't backing down, telling the Washington Post's Robert Costa in an interview today, "I'd never withdraw. I've never withdrawn in my life."

The Post reports, Trump called from his home in Trump Tower and said, "No, I'm not quitting this race. I have tremendous support." 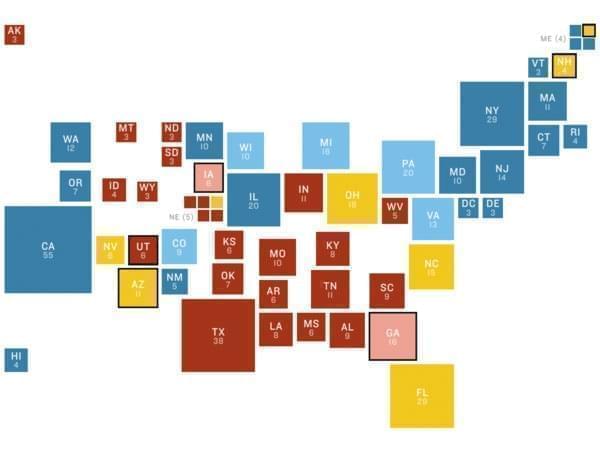 NPR Battleground Map: A Path To The Presidency Opens Up For Trump 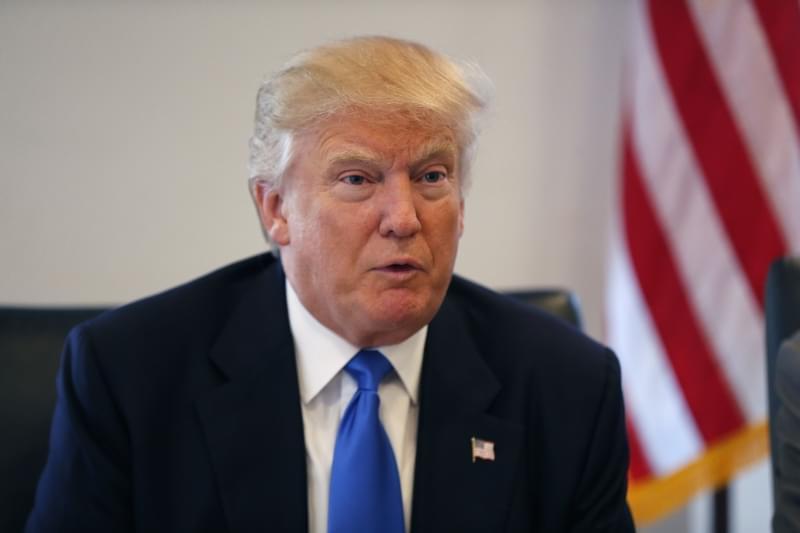 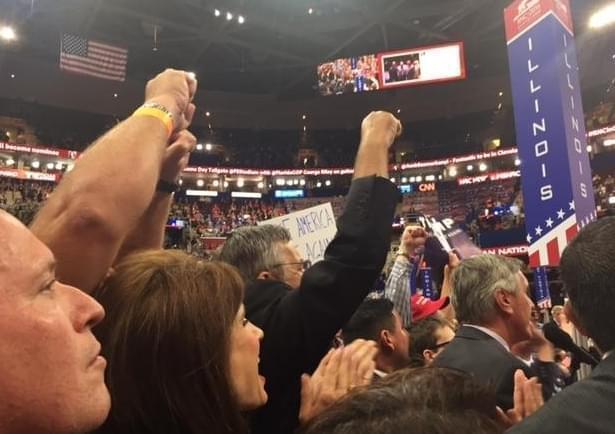 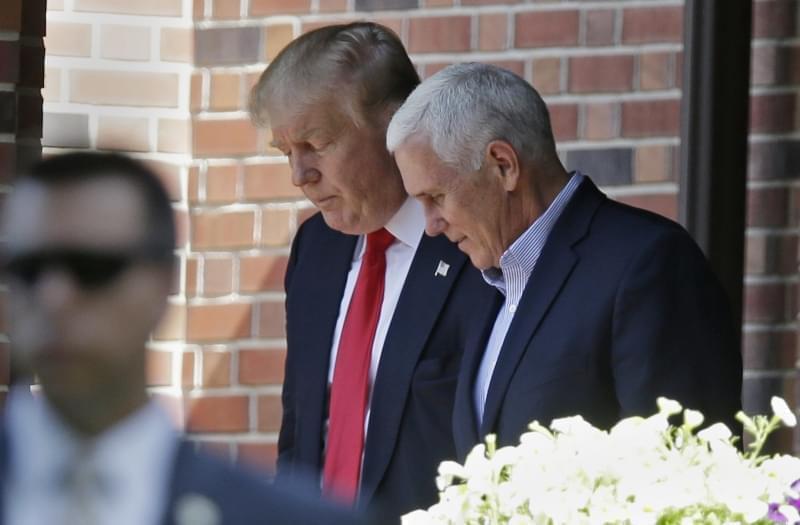