A place to learn before PBS KIDS

Early radio advocates saw the technology’s potential to expand upon the University of Illinois’ mission as a land-grant institution to inform and inspire the wider public, making education accessible to far more people than ever before. Beginning life as the “University of the Air,” it’s true WILL has always been focused on education, in one form or another. College lectures and other talks by experts aimed at adult listeners dominated the airwaves during the first few decades. But WILL soon realized radio’s potential for broadening the minds of children and began creating educational content just for them. 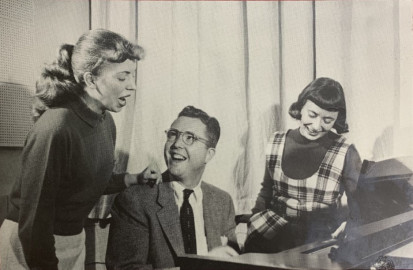 One such program was the immensely popular children’s radio show Stories ’n Stuff, which ran five days a week for 16 years in the 1950s and 60s. When the National Association of Educational Broadcasters (NAEB) moved into Gregory Hall in 1951, Stories ’n Stuff became one of its first nationally distributed programs. The NAEB extended the program’s reach beyond central Illinois by shipping tapes of the show to the other stations in its national “bicycle” network. Eventually, a weekly version of Stories ’n Stuff could be heard on 65 radio stations across the country.

The show quickly gained national recognition and received numerous awards throughout its time on air. In 1951, Stories ’n Stuff was awarded first place in the Children’s Programs for Out-of-School Listening category at the 15th American Exhibition of Educational Programs held at Ohio State University. The award cited the show for “going beyond the usual in entertainment and education programs for children, for sensitivity to the tase and interest of children, and for imagination and skill in program planning and production.” Another national award in 1958 honored the show “for coordinating educational material with imaginative production techniques to produce a highly entertaining and informative series.”

The goal of the program was to teach children ages 5 to 10 years old in an engaging and nonpatronizing way. John Regnell, a director and performer on the show, recalled, “We made a conscious effort not to [talk down to children]. We talked to them as if they were equals . . . We tried to talk directly and didn’t talk baby talk.” The “stories” of Stories ’n Stuff were drawn from history, legend, geography, the lives of famous figures, fairy tales, science and invention, customs of other cultures, music, and sports. The “stuff” included songs, poems, jokes, and riddles, underpinned by playful banter between the hosts.

Much of the content was based on research done by Ruth Stillwell, a former teacher, a mother of two, and the wife of an English professor at the University of Illinois. In the early years, the cast, writers, and producers changed relatively frequently, drawing on university faculty, students, WILL staff, and others in the community. However, by 1956, there were three regular hosts that children came to know and love—John, Mary, and Sue (John Regnell, educational program director of WILL; Mary Rausch, program assistant and graduate student in drama; and Sue Rauschenberger, an undergraduate student in speech; pictured above).

The Rise of Television

WILL continued to record and distribute Stories ’n Stuff while it began to embrace the medium of television, which it saw as another means of furthering its educational initiatives. Before Sesame Street and Mister Rogers’ Neighborhood became available on PBS, WILL-TV produced and distributed a number of its own educational children’s shows in the 1950s and 60s that prefigured the format and tone of these beloved national programs. 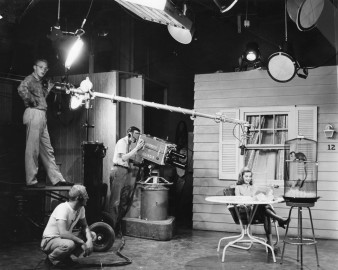 The first children’s television show, and one of the first shows produced by WILL-TV when Channel 12 first came on air in 1955, was Olive Lives Here. The puppet-based show starred local actress Olive Currid and ran for over five years. It had to be recorded live because WILL would not own a videotape recorder until 1960, which would have allowed for editing. Explaining the show’s success, Currid told the Daily Illini in 1957, “We try to help children grow creatively and imaginatively. Ours is a show of pretending. Through our make-believe characters, Scratcho, the scarecrow; Mr. Tree Stump; Penny, the cat; George, the monkey; and Whatzit, children of all ages can become a part of our show and live and laugh with us.” (see feature photo at top)

Another successful WILL-TV production was Tell Me Why, an imaginative science program starring Keith Page, then a speech and dramatics teacher at Edison Junior High School in Champaign who later went on to become a weathercaster on WICD-TV. Tell Me Why was part of a larger series called What’s New? that was distributed by the National Educational Television network. In 1960, WILL-TV produced fifteen 30-minute episodes as part of two series for What’s New?: one on the senses and the other on physical exercise. 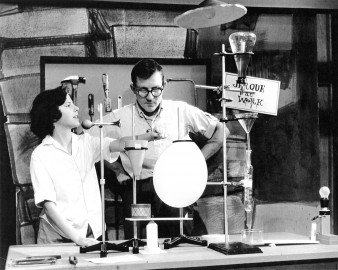 Page played the role of Uncle Keith, a Bill Nye the Science Guy/Miss Frizzle-like character who answered questions from kids about how things worked. He led children on adventures to the moon, the desert, a haunted house, and other places to explain how an aspect of the human body worked, such as goosebumps, peripheral vision, and eyes adjusting to the dark. “I’d climb into a gigantic model of an eyeball or ear, or climb on a carnival ride to explain dizziness,” Page recalled. 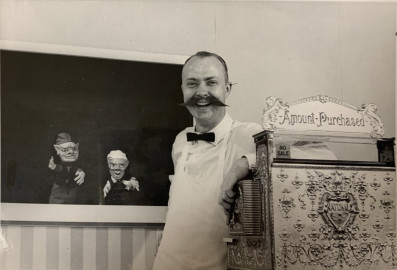 WILL-TV’s cavernous studios underneath the west stands of Memorial Stadium allowed for such large, elaborate sets (designed by sociology professor George Talbot and Bill Korbus), which easily appealed to the imaginations of children watching at home. Although the studio presented acoustical challenges, the unusually large space did allow them to do some innovative things. Director and producer Darrell Blue recalled, “All the lights were on grids, like in a theater. We could raise and lower them as we needed.”

In 1962, WILL-TV moved into more suitable environs in a converted bakery on the corner of Goodwin and Main in Urbana. The station soon produced a show called Mister Cane, which starred Bill Korbus as the titular candy store owner and Harry Cornell, a writer and producer who operated and voiced Mister Cane’s puppet friend, Molasses. Korbus created the puppet himself, reportedly building its head out of the material used to make plastic palates for false teeth. Korbus said, “I was trying to come up with something that would withstand the wear and tear.” 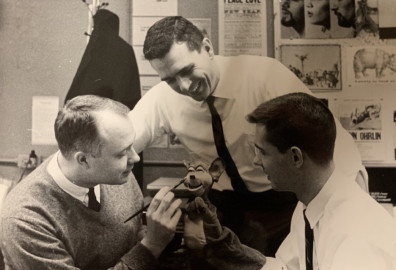 Much of Mister Cane was homespun and created off the cuff, as not a single word of the 15-minute, five-day-a-week program was scripted. Korbus said, “We’d have an idea of where it was going and we’d just pick up the time signals as we went along.” If things went awry, the actors had to go with the flow. Korbus recalled that in one episode, the handle that operated Molasses’ jaw broke, but Cornell carried on like a pro as if nothing happened.

Education Takes to the Skies

To broaden the reach of WILL’s educational programs, the station contributed educational content to the Midwest Program on Airborne Television Instruction (MPATI) and helped furnish local schools with the equipment and training necessary to receive the programs. MPATI, which ran from 1961 to 1968, was a regional initiative based out of Purdue University that aimed to disseminate high-quality educational television programming to schools in an era before satellite television or PBS. 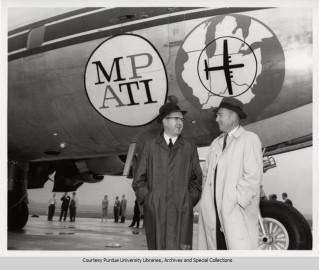 MPATI used a broadcasting technique known as Stratovision, which involved sending a DC-6AB plane equipped with 6.5 tons of transmitting equipment, a library of videotapes, and a gyroscopically stabilized antenna mast to fly figure-eight patterns over north-central Indiana to broadcast courses to schools. Broadcasting from a plane substantially increased the range of transmission over a traditional station on the ground. This was because a terrestrial station needed 20 kilowatts of power to transmit across 50 miles, whereas it only took 1 kilowatt to transmit across 200 miles at 23,000 feet. As such, courses could be picked up by schools in Illinois, Indiana, Wisconsin, Michigan, Kentucky, and Ohio.

Despite the advantage of increased range, MPATI faced numerous challenges. The bulky videotape recorders were powered by vacuum tubes that often burned out or malfunctioned and were difficult to operate in the back of an aircraft in flight. Teachers also struggled to receive a clear signal at times or were not adequately trained on how to use the technology in their classrooms. Unsurprisingly, it was also an incredibly expensive endeavor. The seed grant of over $7 million ($4.5 million of which came from the Ford Foundation) quickly dried up, and MPATI failed to convince enough schools to become paying subscribers to keep the program afloat.

However, the dawn of PBS was on the horizon, with the first episode of Sesame Street airing on November 10, 1969. By 1978, PBS was available via satellite. Today, Illinois Public Media continues to deliver award-winning PBS KIDS programming on WILL-TV with favorites like Daniel Tiger’s Neighborhood, Odd Squad, Wild Kratts, and Alma’s Way. Off-air, we support learning in our community by providing online educational resources for parents and teachers, developing outreach programs such as The Book Mentor Project, and collaborating with schools, libraries, and after school programs to implement things like Design Squad.

Do you have a memory of listening to Stories ’n Stuff or watching any of WILL-TV’s early programs for kids? We encourage you to share your story here.