February 12th marks Abraham Lincoln's birthday, and that means Fritz Klein is in high demand. Klein has built his career out of being Abraham Lincoln. The actor stumbled into the role years ago as what was supposed to be one of many roles in his acting career, but the opportunities to portray the 16th president kept coming and soon Klein decided to relocate to Springfield and portray Lincoln full time. 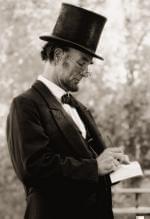 There's much more that goes into Klein's portrayal than putting on the stovepipe hat. Two-thirds to three-quarters of his time is spent preparing for events, furthering his research and applying what he learns. "Sometimes people would incorporate a verbal description of what he sounded like so I would combine those things" said Klein.  "Lincoln’s voice was not an easy voice to listen to, so I tone it down a little bit."

Klein hopes that by bringing the 16th president back to life for his audiences he can encourage them to reconnect with history. “There are people who have gone to great lengths and laid down their lives so that we can enjoy what we enjoy thoughtlessly every day. And to bring a sense of gratitude to the present from what has happened before I think is important,” Klein said. “When I see that people are connecting, that is very gratifying.”

This February 12th he performs at the Abraham Lincoln Presidential Library and Museum.