The faculty union on the University of Illinois Springfield campus took another membership vote this week. And according to the union, the results were in favor of continuing the work stoppage.

Instead of being inside a classroom teaching, some the nearly 170 tenure and tenure track faculty members have been walking picket lines.

They've also had students and other joining in. Wednesday, an area lawmaker participated in a rally in support of professors.

"For me it's an easy choice. These are working people. They're asking for a fair contract.  They're essentially asking for 20 years of practice to be codified, to be put on paper and signed," he said. "It seems very reasonable to me. I don't know why you wouldn't come out here and stand with these working people. I'm proud to do so."

The faculty union, consisting of tenure and tenure track faculty, walked off the job this week after talks with the university failed to reach a contract agreement.

The action comes a week before final exams.  Students are still being told to show up for classes.  But it's unclear how it could impact the completion of the semester.

McCann admitted the timing of the strike could create hardship.

"I guess if you're going to get someone's attention, you have to do it when they are paying attention" he said. "I suppose it would have been a whole lot easier to have done it in the middle of summer.  But I don't know if anyone would have paid attention."

The UIS Administration earlier said talks had been making progress and called the strike "a disappointment."

Another session with a mediator is set for tomorrow.  While salary and benefits are part of the discussion, other issues involve tenure and job protections. 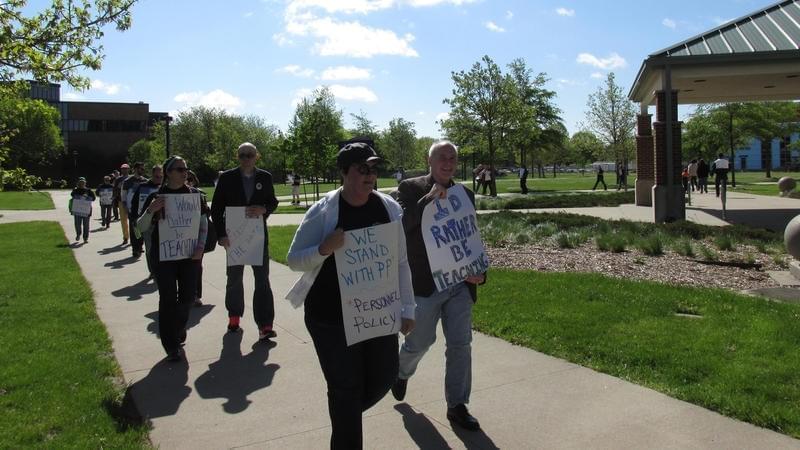 UPDATE: U of I Non-Tenure-Track Faculty Vote To End Strike