If Brendt Christensen told his defense attorneys the truth, the remains of Yingying Zhang, the young woman he murdered two years ago, may be in a landfill near Danville.

At a news conference attended by some 30 members of the news media Wednesday in Urbana, Yingying's family released a statement saying they still hold out hope her remains could be recovered.

The Zhang family said prosecutors told them on July 25 that during unsuccessful negotiations for a possible plea agreement in November 2018, they learned from defense attorneys that Christensen claimed to have divided Yingying Zhang’s remains in three garbage bags in a Dumpster outside his Champaign apartment building.

The family says that federal, state and local law enforcement investigators determined that the remains would have been transported to one of two private landfills near Danville, but only after being compacted.

“They described for us that at this stage, with decomposition and compaction, the size of the remains could be smaller than a cellphone,” said Steve Beckett, an Urbana attorney who has been representing the Zhang family’s interests.

In addition, investigators determined that at the time Christensen’s attorneys disclosed his statements to federal authorities, Yingying’s remains would have been covered by at least thirty feet of fill from subsequent landfill deposits. More landfill material would have been added since Christensen’s disclosure ten months ago.

The Zhang family did not find out about the possible location of Yingying’s remains until July, because prosecutors received the information from Christensen’s attorneys under condition of immunity as part of plea negotiations. That means both sides agreed that the Christensen’s description of what he did with the remains would not be revealed in the trial.

Beckett says the arrangement for immunity was an unusual move, in his opinion. He believes a proffer agreement would have provided similar protections for Christensen, while allowing investigators and the Zhang family to learn the information right away. But Beckett says that legal device was not used in this case.

Despite the challenges involved, law enforcement agencies are still reviewing ways to conduct a landfill search for Yingying Zhang’s remains.

“The prosecutors indicated the strong desire of the agencies involved to go forward with the search,” said Beckett. “The family welcomed that.”

But in addition to the difficulties involved in searching for compacted remains in a landfill, it is possible that Christensen’s story about what he did with the remains is not true.

“If what that man said is true, it further confirms that he is a heartland and evil person,” said Ronggao Zhang, Yingying's father, in a statement that he read to reporters in Chinese, and which Wang read in English. “We condemn his brutal and malicious actions and we hope that he suffers for the rest of his life, as he made Yingying suffer in the final moments of her life.”

“We now understand that finding her may be impossible,” Mr. Zhang said later in his statement. “But if Yingying’s remains are ever found, we will return to take her home to China, where she belongs.”

For now, Yingying Zhang’s father says they will follow Chinese custom and create a gravesite for her locally, burying some of her personal effects in a private ceremony to honor her memory. Mr. Zhang said they hope to locate the traditional gravesite at the memorial garden created last year, at the campus bus stop where Yingying was last seen in surveillance video.

“We are working with University of Illinois officials to do so,” said Zhang. “We hope it will be a solemn place of reflection to all who visit, a place to remember the joy Yingying brought to her family and to everyone she met during her life.”

Ronggao Zhang was the only member of the Zhang family to speak at the news conference, which was held at the Beckett Law Office in downtown Urbana. Other family members attending included Yingying's mother, Lifeng Ye. Beckett explained that the mother wanted to attend the news conference, but had been shielded by her family from the details of what happened to her daughter's body until just hours before the event, when she insisted on hearing the details. Overcome with emotion, Ye was led out of the news conference before it was finished, and her weeping could be heard by reporters from another room until a door was closed.

A public memorial service for Yingying Zhang, where the Zhang family is also expected to appear, has been scheduled for Friday, August 9, at 1 PM at the First Baptist Church at Savoy. In another memorial effort, the Zhang family is working with the University of Illinois to establishment Yingying's Fund, an endowment to help international st udents in crisis and their families. 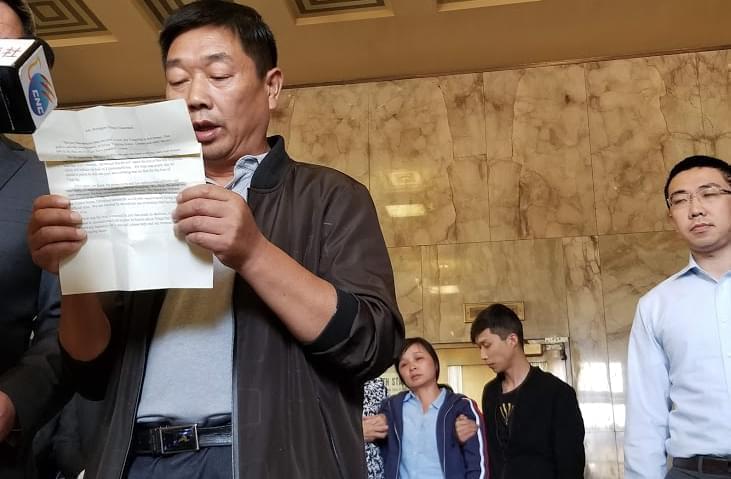 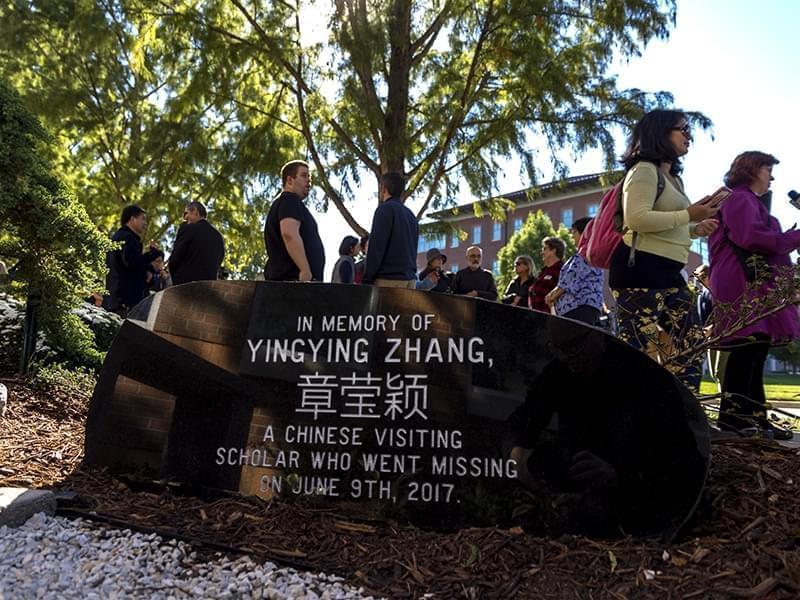